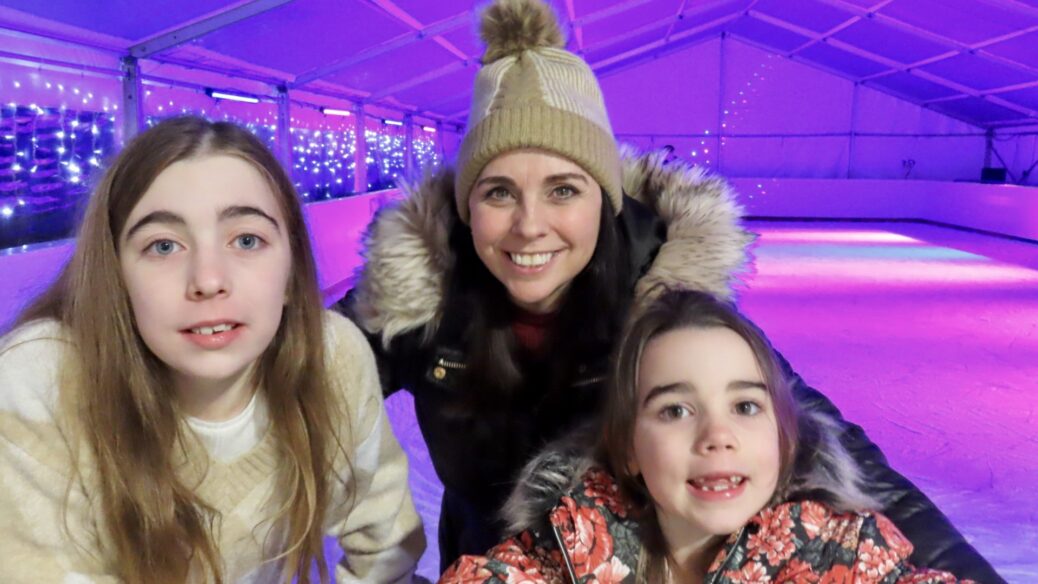 The Germans are rubbish at World Cup football (oh, the joy!)

But when it comes to ice skating, Christmas celebrations and bouncing oompah music, they’re really rather good.

We were excited to hear that a new Bavarian Christmas themed ice skating rink was coming to Victoria Park in Southport this Christmas courtesy of Ice Skating Southport.

It adds to the already brilliant list of Christmas themed events and attraction in the town this December with Southport BID organising Gingerbread Trails, a Christmas Grotto and Christmas Carriage Rides; festive drive-in movies at Victoria Park; Christmas movies at Bijou Cinema; plus Santa and Elf visits and Christmas wreath making at Southport Market.

Ice Skating Southport opened on Saturday (3rd December 2022) and runs every day through until 23rd December, no doubt getting even busier the closer we get to Christmas.

The attraction has been brought to Southport by North West Marquee Hire and Southport TV, the team which organised the successful recent Oktoberfest at Victoria Park in October. 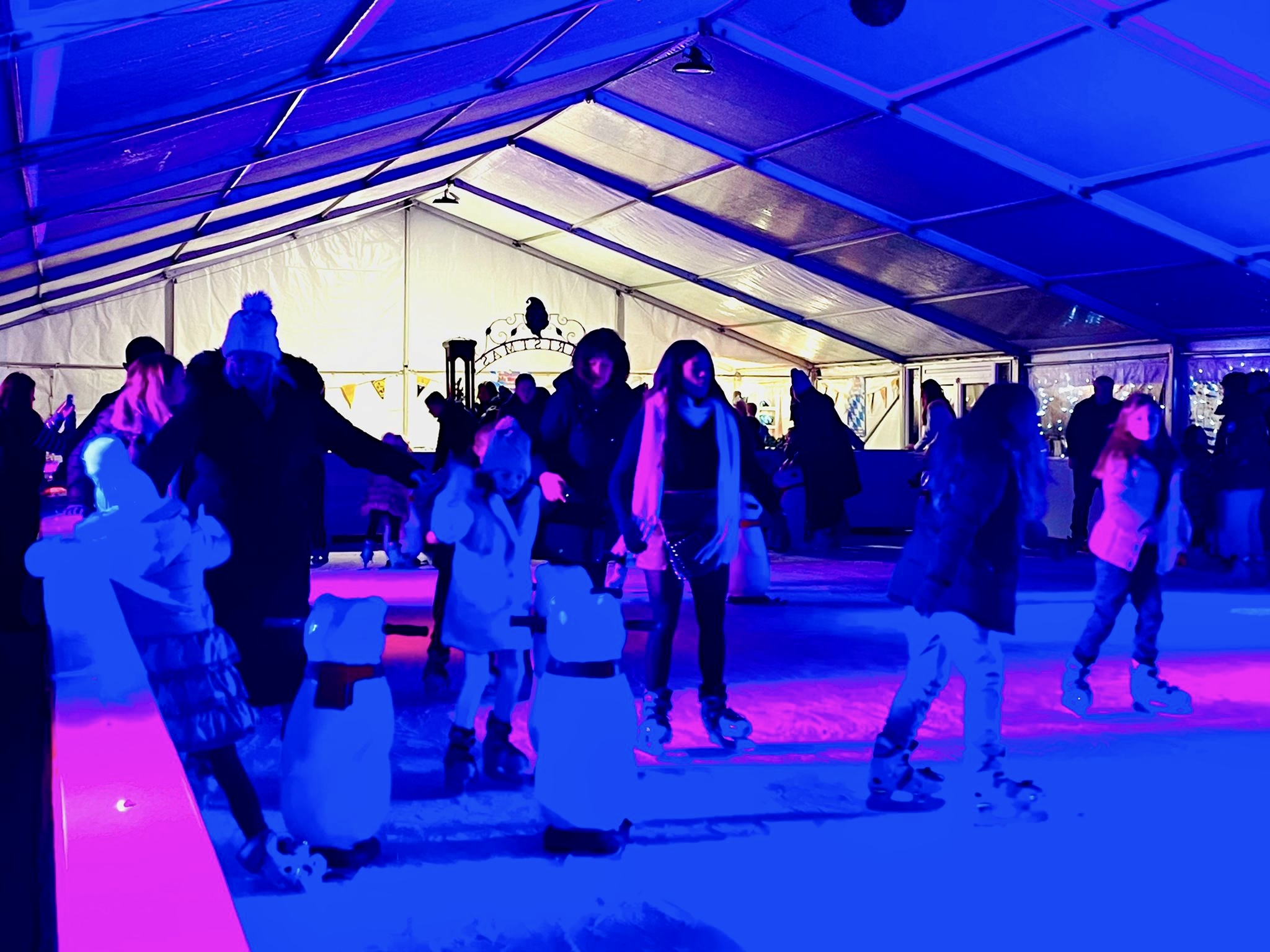 It went so well they wanted to come with a Christmas themed event.

Lots of people on Stand Up For Southport have been asking a similar question about it – are they using real ice?

Not something I have a great deal of experience of – my last attempt was 30 years ago at an ice rink in Altrincham – but I couldn’t wait to give it a go again.

Neither could my wife, who has skated before, or my two daughters (aged 6 and 11), who had never tried it before. 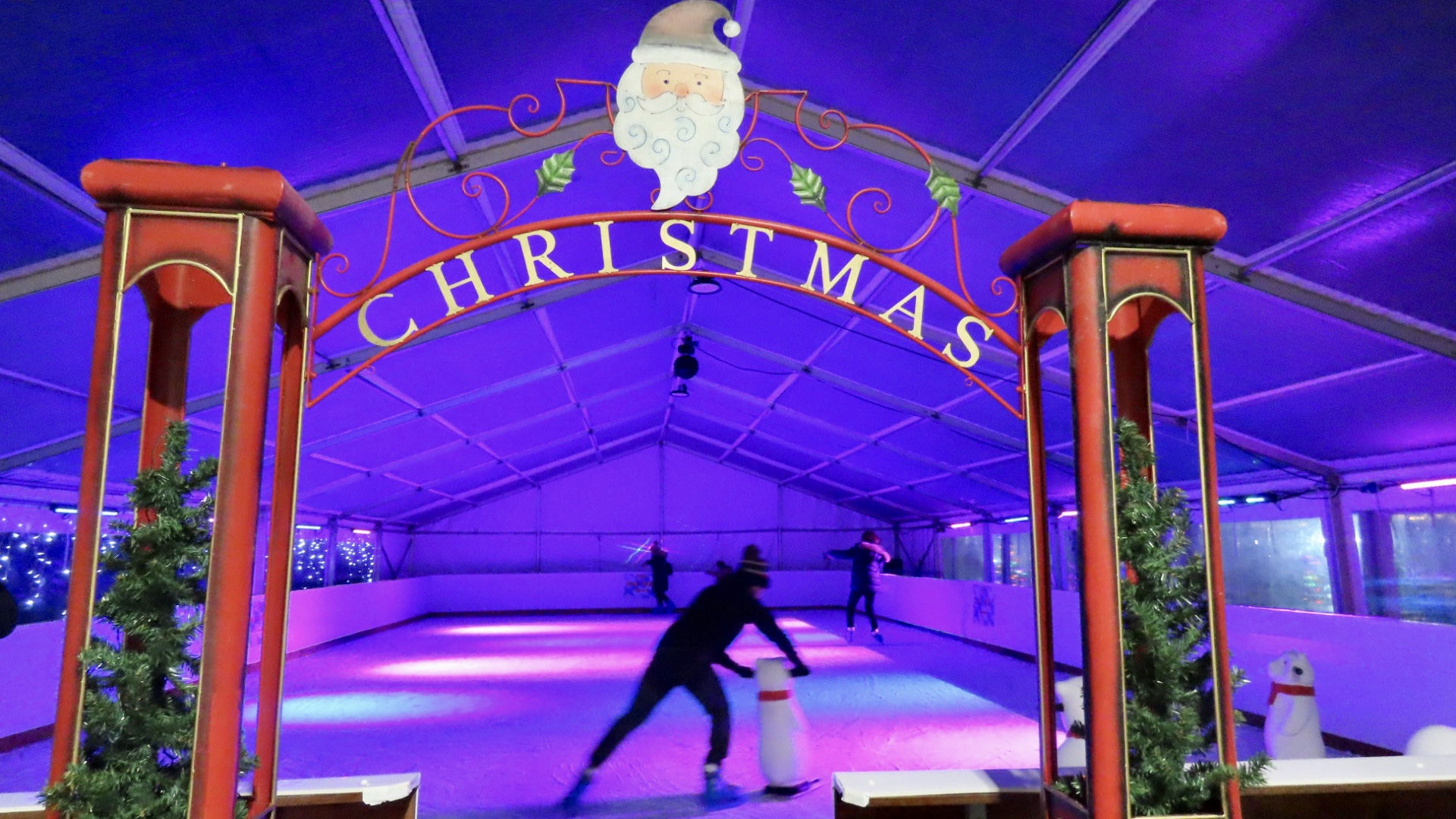 Now after such a lack of experience we were never going to be the next Torvill and Dean, or challenge for a place on the next series of Dancing On Ice.

We all took to the rink grabbing onto the sides for dear life.

But as we went on the more used to it we got. The polar bear skating aids are a great way of helping younger skaters get used to the ice.

Before long the German music was playing, the lighting was adding to the atmosphere, more skaters were on the ice, the room was buzzing and we were gradually finding our feet and starting to skate round. Just don’t try to go too fast too soon!

We loved it – our daughters didn’t want to leave at the end and can’t wait to go ice skating again.

The ice skating rink is under cover, inside a covered and heated marquee so it doesn’t matter what the weather’s like outside.

The staff on site couldn’t be friendlier, or more helpful. 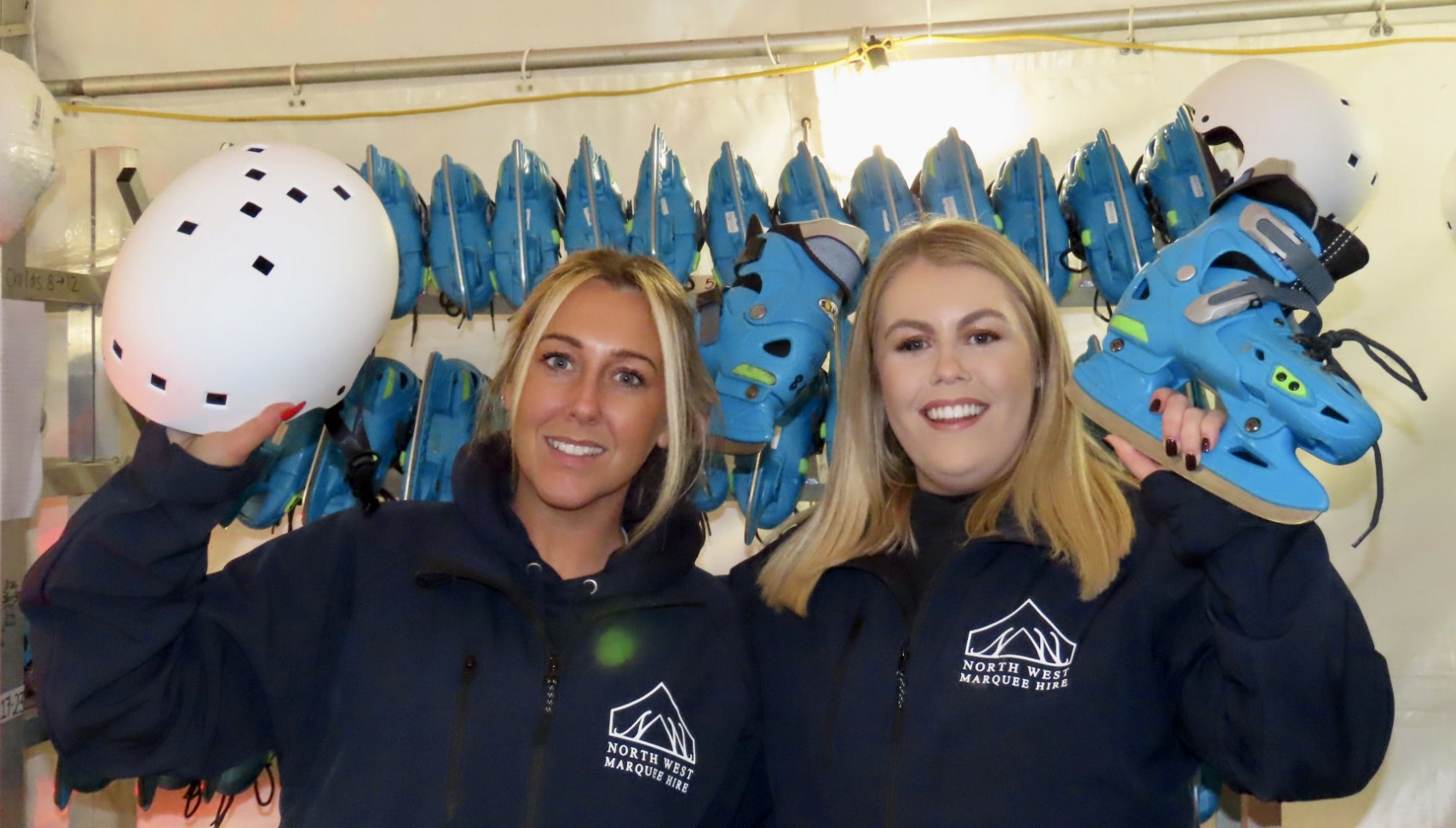 The attraction is free to enter, with charges payable for anyone who fancies ice skating.

Sessions are for 45 minutes on the ice and 15 minutes to lace up, every hour on the hour and you can ice skate from 5pm-10pm weekdays and 11am-11pm weekends. Kids helmets are offered at no charge and there are polar bear skating aids available should you wish to hire one at £4. 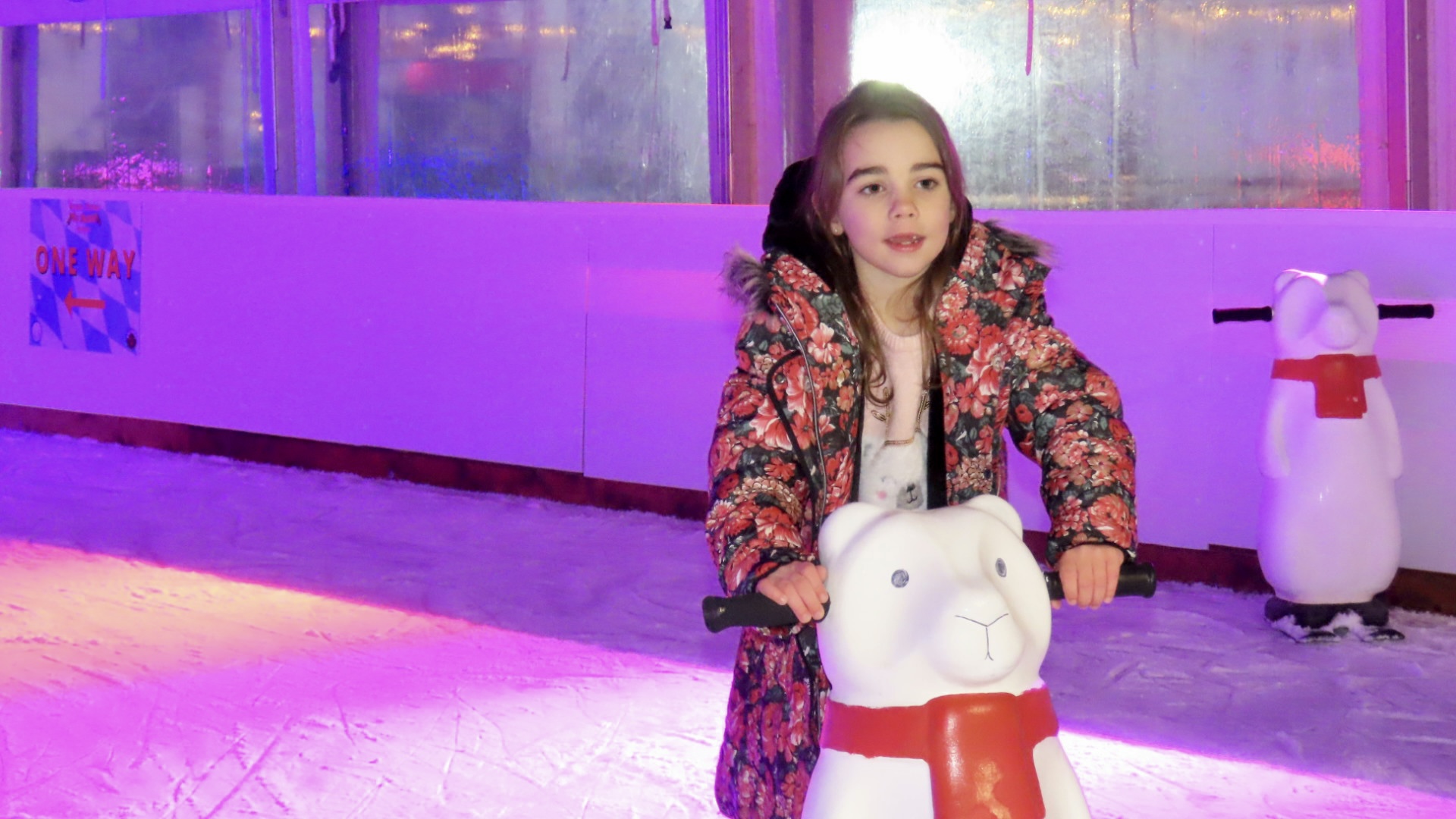 So if you just stand and watch your braver friends or families take to the ice, you’re not charged for going in.

Next to the ice skating rink is another marge marquee, with loads of seating available on tables and benches.

There is German food available and a large well stocked bar, with a variety of drinks including mulled wine, gingerbread hot chocolate as well as tea and coffee  and German beers in either pints or steins.

There is a real family vibe during the day and at night there are several themed party night available, with entertainment on rotation including ‘Disco On Ice’, ‘The Bavarian Stompers Duo’, ‘Lionel The Vinyl’ playing all your fave 80s hits and there will also be a Kingsway & Manhattans 90s dance night with Mark Pickup. 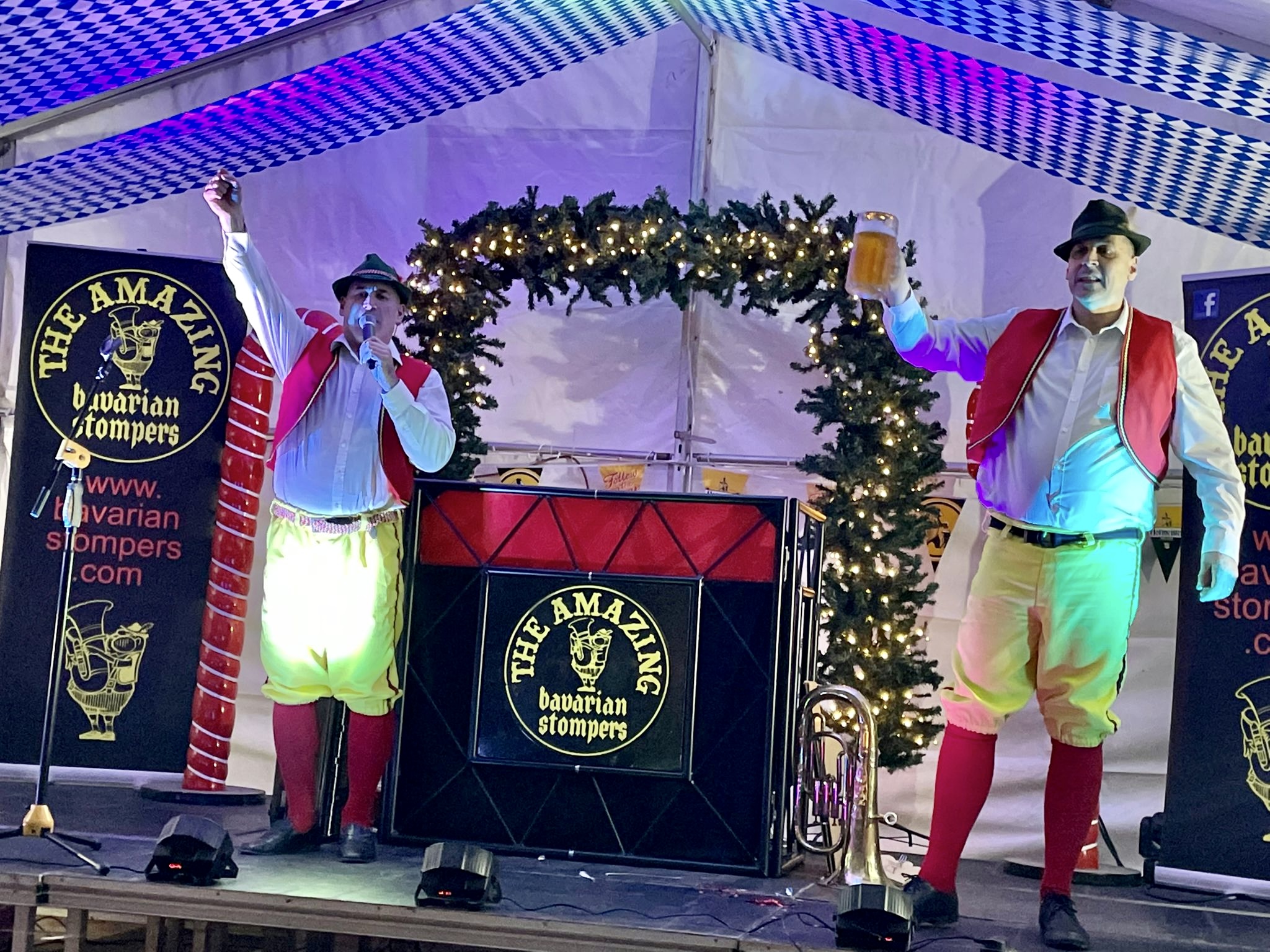 We saw the Bavarian Stompers when we were there – they were brilliant!

No-one stayed sat down for long, with people quickly up dancing, or invited to join in at the front of the stage! It made for a fun, engaging evening out.

It’s something very different and very exciting for Southport, and a real way of celebrating Christmas in style.