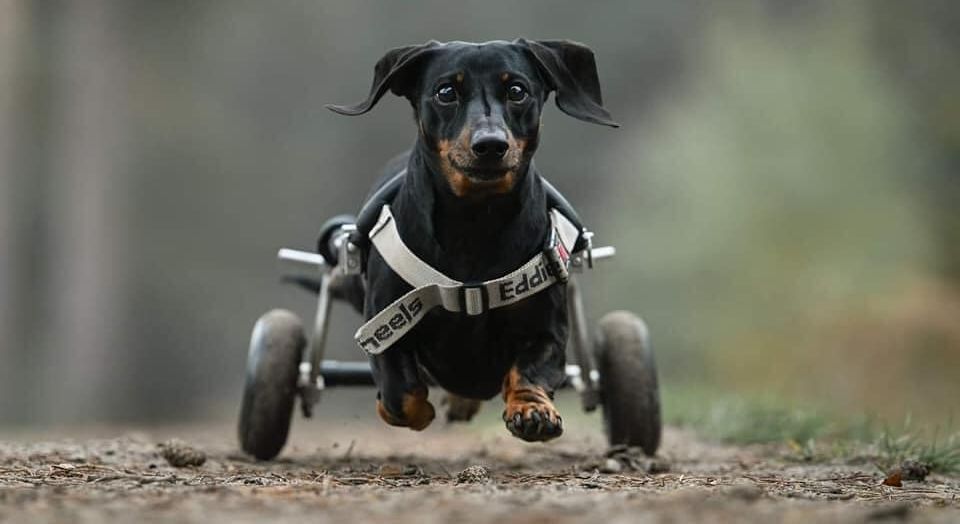 Meet Dennis the Dachsund – Southport’s “friendliest and bravest” new celebrity dog who you may well have spotted wheeling himself around the resort!

Dennis uses his wheels to allow him to get out and about, after suffering from a painful condition which sometimes affects dachshunds – but his love of life keeps him positive.

Over the past few months people have been enjoying seeing Dennis in Southport, or have been following his exploits on his own Dennis the Dachsund Facebook page or on regular posts on the Stand Up For Southport Facebook group.

This Saturday (2nd July 2022) at 10am Dennis, a miniature dachshund, has been given VIP billing, after being invited down to attend the official opening of the new Jollyes pet store at Kew Retail Park in Kew in Southport.

His owner, Jo Charman-Bennett, said: “Dennis led a completely normal life until, aged seven, he was struck down by the dreaded IVDD, a disease that affects 1 in 4 dachshunds, but to varying degrees. Dennis has Grade 5, the worst, but he doesn’t let it get him down. 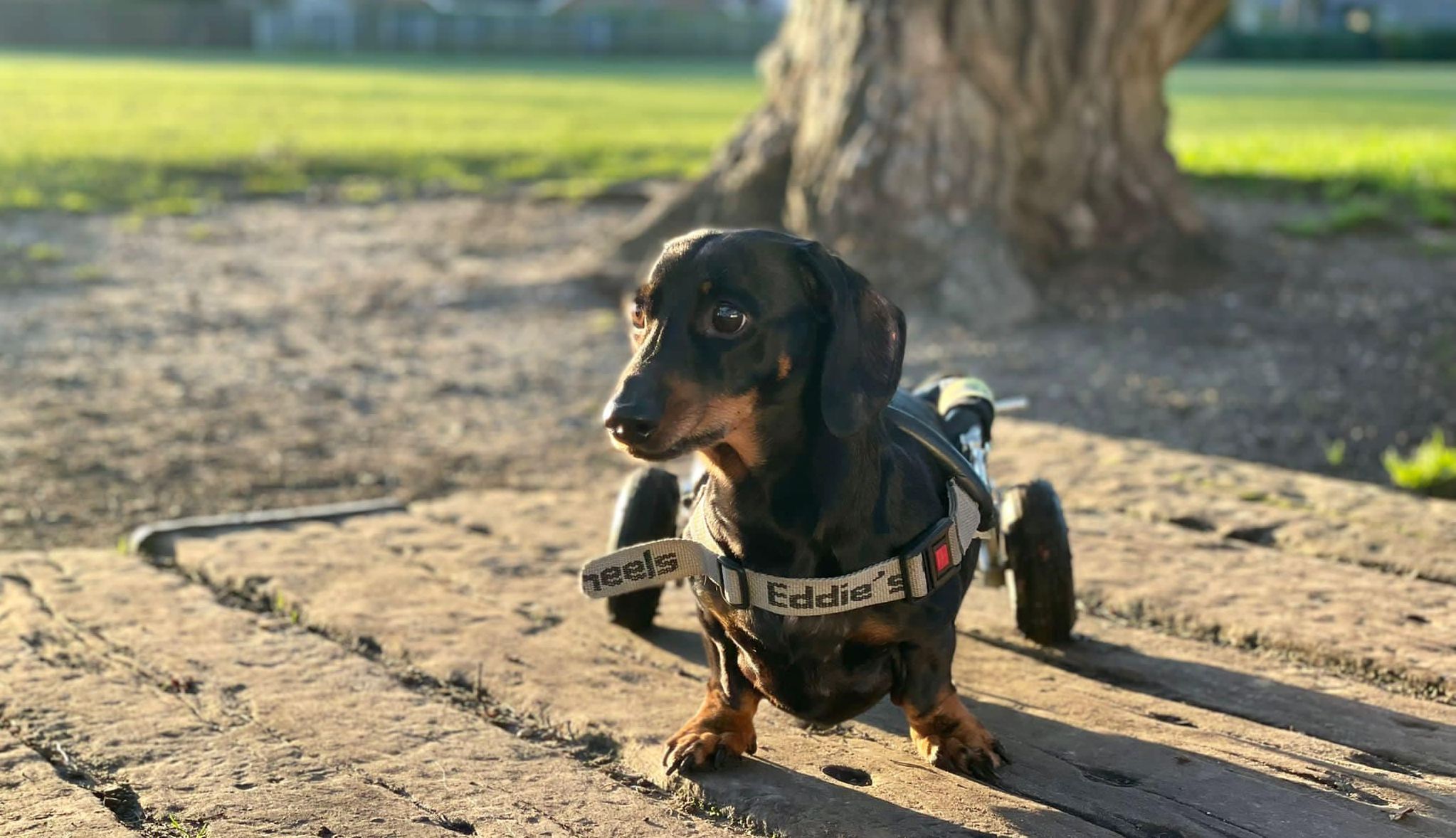 “He woke up, screaming in pain; he had an emergency MRI and surgery, later that day, months of physiotherapy, and then trialled the cart.

“The rest is history – he makes friends wherever he goes, and is the bravest, calmest and most mellow of dachshunds.

“He has sustained me through bereavement and treatment for cancer, and I cannot imagine life without his complete loyalty and adoration.”

Jo and Dennis have been quickly making friends since moving to live in Southport from their previous home in Crookham in Hampshire earlier this year. 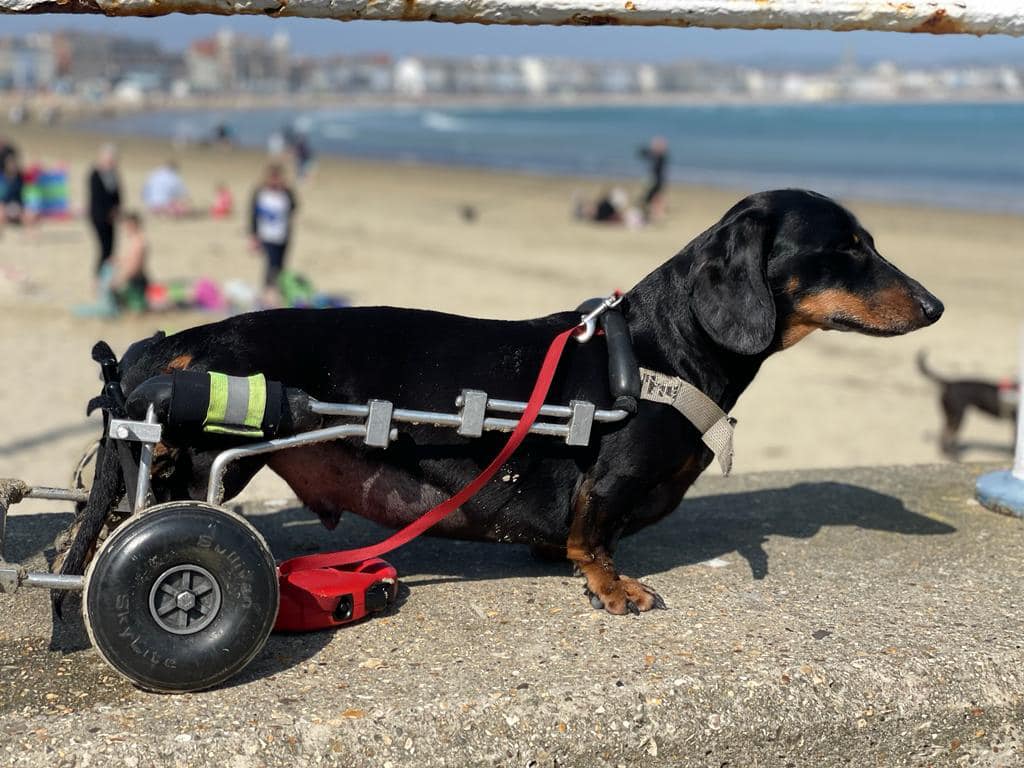 It was a dream of Jo and her husband David to own a dachshund, until tragedy struck and David died suddenly at just 54 years of age.

Jo said: “I have loved Southport for many years, and it was a dream of my late husband and I that we should move once we had retired.

“Dennis and I have enjoyed strolling up and down, making friends, as we have done in Crookham, in leafy Hampshire.

“I have been really touched by the warmth of our welcome in Southport.

“Dennis is a miniature dachshund, who became part of our family because my late husband said that we could get a dog once the children left home.

“When my husband died, suddenly, aged only 54, my daughter said ‘Dad’s ‘left’ home; let’s get a Dennis.’ And so he joined our family. 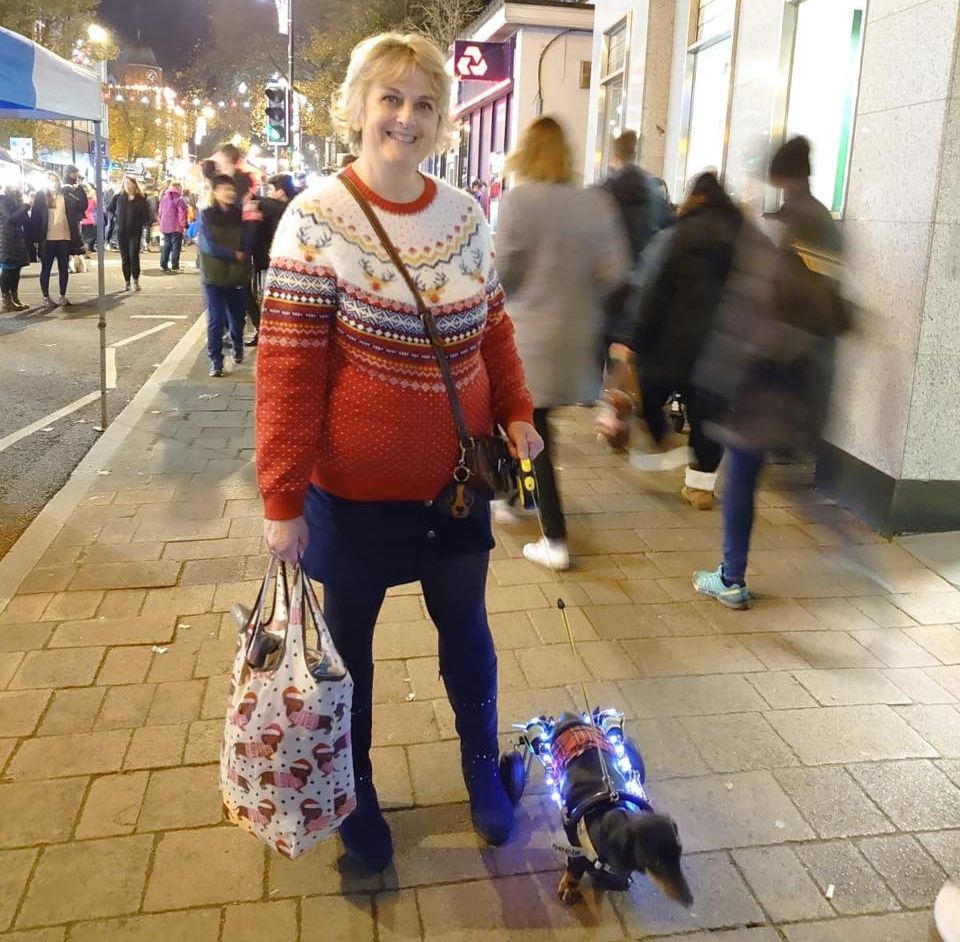 Dennis the Dachsund from Southport with owner Jo Charman-Bennett

“Dennis was the name that David had already chosen for the mutt, had he lived to see him.

“My favourites are the pictures of Dennis at Stonehenge, plus the ones of him running.

“I can’t believe he is this popular! 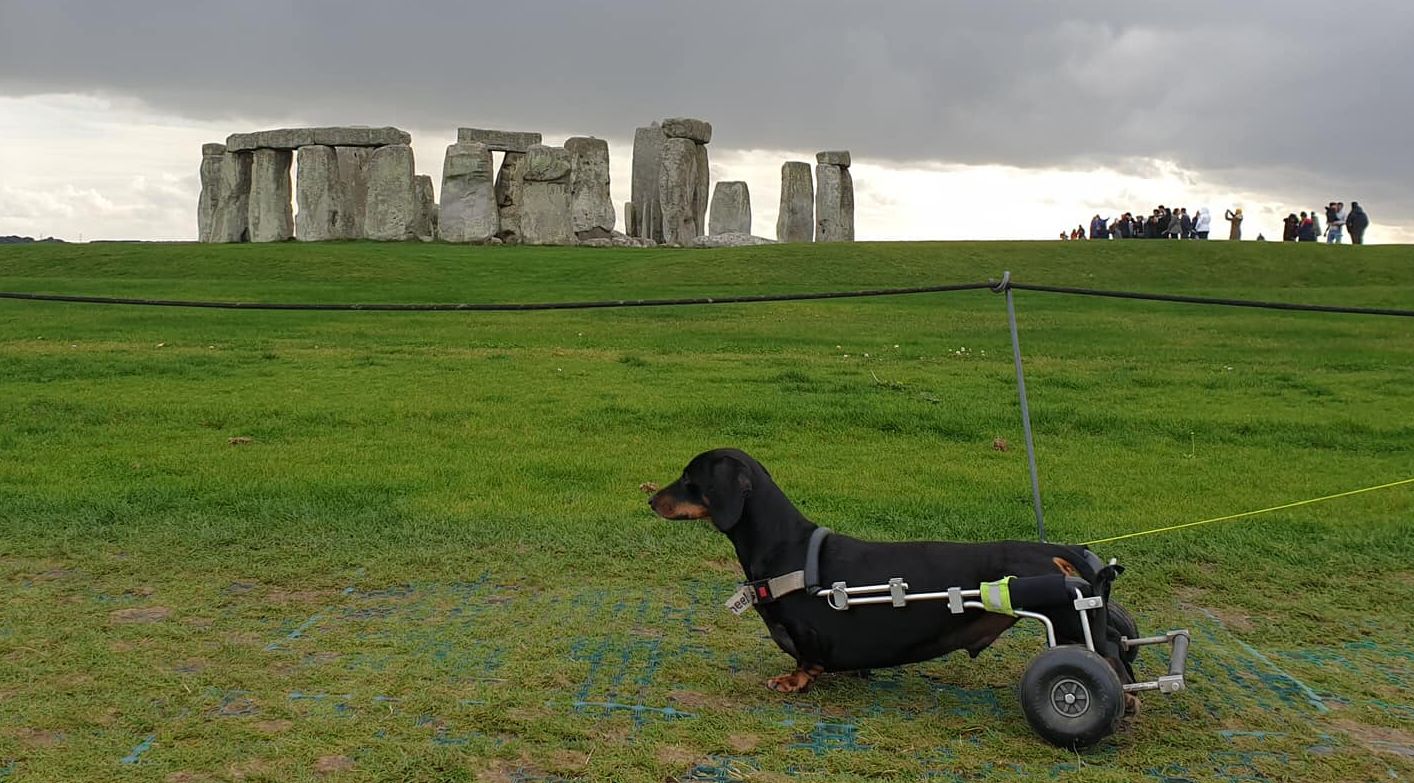 “I adore him, naturally, but Southport has been SO welcoming. I’m loving it here!”

Jo is a Mum of four, with three sons: Ed, William and Henry, and a daughter, Ellie.

Jo said: “Ed is the oldest, then Ellie, followed by Will, and then Henry.  I am so blessed by all my babies. They are all fully grown now.

“Ed is 31 with two Masters in maths, Ellie is 30, with a degree in psychology and drives ambulances, Will is 25 and works as a guard for Trans Pennine and Henry is 24 and has a Masters in physics – all very different but all adored by me and my late husband.” 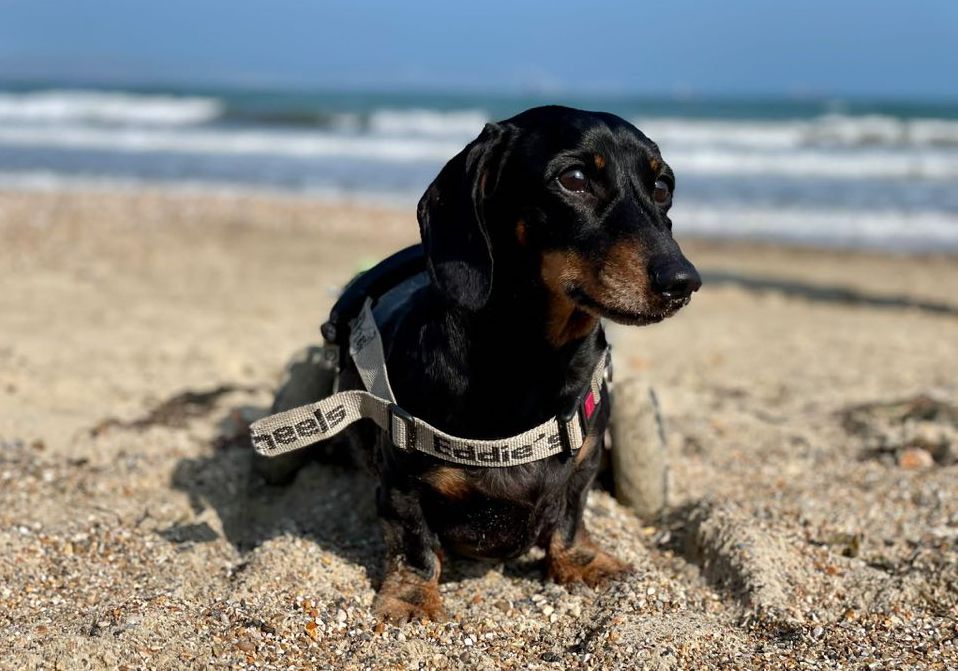 Jo is looking forward to Dennis being a guest of honour at the official opening of the new Jollyes store in Southport this Saturday.

She said: “We cannot wait until this weekend! I had thought that we were part of a general invitation, and then saw the Jollyes publicity and posters featuring Dennis – what an honour! I hope we don’t let anyone down!”

The new Jollyes Southport store, at Unit 3 on Kew Retail Park on Scarisbrick New Road, will open at 10am on Saturday 2nd July.

It will employ 10 colleagues, including store manager Martin Pitt.

Jollyes has lined up a fun-packed opening for the new store to give Southport’s pet lovers a warm welcome from the UK’s “Pet People” including: 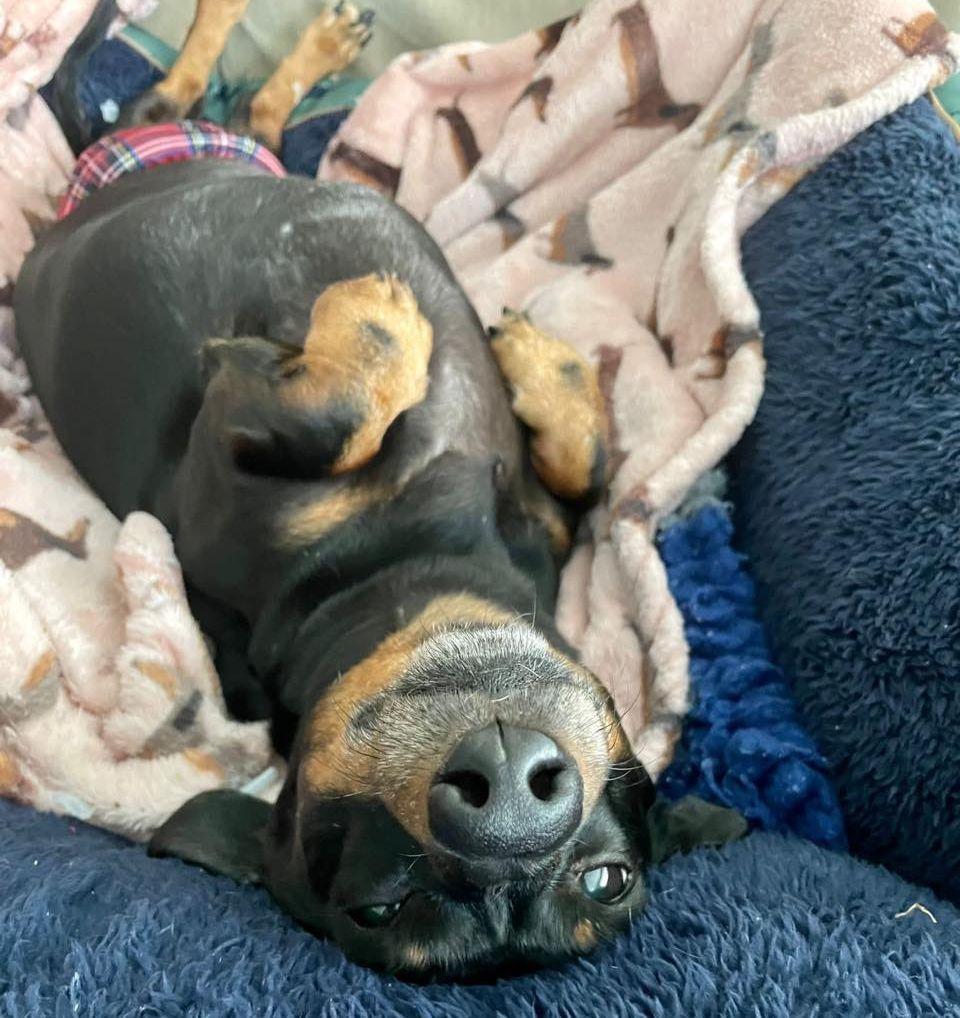 Jollyes has more than 70 stores across the UK and the 6,000 square feet Southport store will complement its popular outlets in the West including Ashton-under-Lyne, Bolton, Eccles, Ellesmere Port and Runcorn.

Sarah Farrar, Jollyes regional manager, said: “It’s an exciting time for Jollyes as we expand across the UK and we can’t wait to open our doors in Southport, taking our place in the community and playing our part in the local economy.

“The new store is in a great location, and we’ve designed it to make it as easy as possible for pet lovers in the town and surrounding area to find what they are looking for, from toys to treats.”