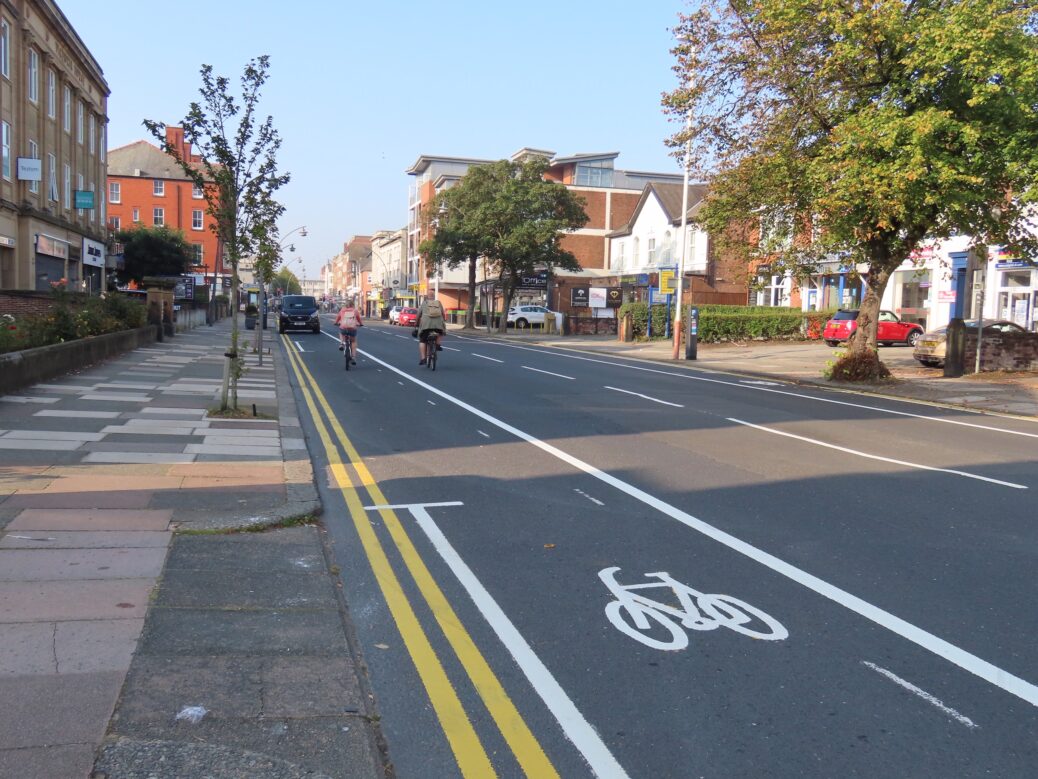 Works are designed to reduce traffic and increase cycling and walking in the town centre area, with cars now banned from Queens Road, pay and display parking spaces on Hoghton Street and Talbot Street removed in favour of cycle lanes and a ban on parking on Chapel Street reversed.

Owens of businesses in the area say they fear the changes are making it more difficult for customers and shoppers to access the town centre.

They have set up two petitions against the proposals which have gained over 2,000 signatures in just 24 hours.

Sinclair Hesketh D’Albuquerque is the owner of Rueters restaurant and bar on Hoghton Street in Southport. He has launched one of the petitions against the proposals.

He said: “My thoughts are that this has been rushed into by Sefton Council with absolutely no consultation with locals or regard to businesses many of whom will be heavily affected by these cycle lanes.

“Decisions have been made by Sefton Council who it seems have not even visited the road.

“If you are coming into town shopping, you are highly unlikely to come on your bike.

“The traffic on Hoghton Street was never at a level to make it dangerous to cyclists as it was.

“There are very few cyclists who use the new lane and there are already unused cycle lanes on Derby Road and London Street that can get you into the town centre.

“Also where are vehicles supposed to park now?

“Two out of three pf Sefton Council’s Park and Ride schemes have now been closed with one of them being used as a council road maintenance yard!”

David Barron is the owner of Barron Financial Solutions, based in Heritage House on Hoghton Street, where they share a building with a number of other commercial firms.

The firm was established in 2001 in Southport and employs 17 people with vast experience in the financial services industry.

He said: “I am just shocked at this decision to create new cycle lanes along both sides of Hoghton Street, and to remove all of the on-street parking places.

“It is a surprising decision for an area that supports so many successful businesses and provides so much employment in Southport.

“We have got solicitors, financial advisors, estate agents, solicitors, the big Stokers furniture store, restaurants, cafes, and the Little Theatre. We have built up a great business community here, which needs supporting.

“Customers are now concerned that they can no longer park nearby and pop in for half an hour to collect keys or sign documents, or just drop in somewhere for a coffee. Where else nearby are customers supposed to park?

“This scheme is very damaging to all of the businesses along here and in the surrounding area.

“And I am not sure what huge benefits it will bring as a result.

“Yesterday, I only saw one cyclist in this area all day – and they were riding past along the pavement!

“This is a decision with massive implications which needs to be reversed. My concern is that this decision could drive businesses and customers out of town.

“Parking in Southport is already an issue. We need cheaper parking, or parking concessions, and we need more parking spaces to be made available, not less.

“This is an odd decision for the council to make and it has been done without any consultation or any conversations with any of the businesses along Hoghton Street.

“There has been a real lack of thought of the consequences of what could happen to the businesses along this road.”

Mark Cunningham, owner of Anthony James Estate Agents on Hoghton Street in Southport, said: “It is a disproportionate action that will have little result in its primary object to encourage cyclists.

“It will be detrimental to business and it disadvantages the already insufficient available parking spaces available at the moment.

“Already Blue Badge holders have used it for their additional parking spaces for town centre, therefore highlighting the lack of Blue Badge spaces near the town centre for disabled users and a distinct lack of cyclists since the work has been done.

“There has been an utter disrespect for local businesses shown by the lack of consultation and a slapdash approach to this project.”

Oldfields Autos Ltd on Queens Road in Southport have also shared their concerns over the scheme.

They launched a petition, asking Sefton Council to remove the Southport Queens Road restrictions, which gained over 1,000 names in just a few hours.

They said: “Closing Queens Road to everyone except buses and cycles is absurd.

“The road has hotels, private houses and flats as well as a long established family run car dealership.

“It will add time to a large percentage of local peoples’ journey, make the side access roads onto Queens Road far busier which means people have to travel further using more fuel and thus damaging the environment, not to mention the fact that it will put visitors off visiting the town centre.

“Taxis will have to make detours to access residencies on Queens Road.

“There was no consultation with local residents or businesses, apparently our local councillors knew nothing about it until it had been approved.

“Local residents cannot park outside their own property,  the car showroom and other shops will not get any passing trade.

“As a family run car dealership that has been here since just after the Second World War, providing transport for generations of local families.

“We are disgusted that this has been done without any dialogue with local people as it affects our lives and livelihoods.

“We are all in favour of cycle lanes but to close the road to all but buses and cycles is absolutely ridiculous. Please help us to petition Sefton MBC to rethink!”

The scheme is being carried out by Liverpool City Region Combined Authority, Sefton Council and MetroActive.

They said: “We appreciate that travel using public transport is difficult with social distancing restrictions and we hope to encourage walking and cycling as an alternative to car use by providing access routes to Southport town centre to link with other routes.

“Please note that all plans are subject to review and change.”

They added: “We know that getting to Southport town centre for work, shopping or leisure is a priority for our community. We need to make sure that town centres are well connected to local communities by walking and cycling.

“Please tell us your views once the routes have gone in and we have finished our work on them. We may make changes to the way the route has been created based on what you tell us. All comments can be emailed to transport.planning@sefton.gov.uk”

Cllr John Fairclough, Sefton Council’s Cabinet Member for Locality Services said: “Our vision for Sefton is a confident and connected borough, where people can enjoy the use of many cycle and walking friendly routes, where we all work together to keep Sefton clean and green with a commitment to low pollution and better air quality.

“The Emergency Active Travel Fund will allow us to make changes to two routes in Sefton, one in Southport and one in Bootle which will encourage cycling and walking and make significant improvements to our streets to enable people to use cars less and move around in a different way.

“We want to encourage people to use active forms of travel by increasing the opportunity for people to walk or cycle, in line with the Council’s commitments to improving Health and Wellbeing and tackling Climate Change.”