A Victorian town? Southport is celebrating our heritage with the Roaring ’20s!

Home A Victorian town? Southport is celebrating our heritage with the Roaring ’20s!

Southport is rocketing its way back into the roaring ‘20s and ‘30s!

It’s an era we need to recognise as being much more significant for our resort than we perhaps realise as we approach the centenary of the 20th Century version with plenty of modern day reasons to mark the current period.

But what about the Victorian era I hear you say?

Through Stand Up For Southport, we were honoured to be invited to carry out consultation work in preparation of the Southport Town Deal submission, which led to the successful grant of £38.5million investment into our resort.

It was a remarkable process which really engaged with local people, local businesses and local school, attracting over 7,000 views and comments.

It was a truly illuminating exercise which gave a real insight into the problems, the opportunities and the perceptions that people have of their hometown.

One common theme which frequently emerged was that so many people perceive Southport to be a ‘Victorian’ town, whose golden era was during the reign of Queen Victoria, between 1837 and 1901.

There is so much from this era to celebrate of course. Many of the grand buildings along the leafy Lord Street boulevard were built then, including the stunning Wayfarers Arcade (previously the Leyland Arcade and Burton Arcade) which opened in 1898.

Southport Pier, the longest iron pier in the country, opened in 1860, and still stands proudly today.

Queen Victoria herself is honoured with a fine statue that stands at the top of Nevill Street.

Many people in the Town Deal comments wanted to see Southport ‘restore its Victorian heritage’, or even to honour it with a Victorian museum, or an annual Victorian festival. They are all; excellent ideas.

People’s thinking about our town’s heritage might be about to change however – and it’s partly thanks to many millions of pounds being invested in restoring some of the most remarkable landmarks from the years between World War One and World War Two.

They include The Grand on Lord Street, which has already seen over £4million spent by Andrew Mikhail, owner of Mikhail Hotel and Leisure, on the first phase of bringing this fabulous building back to life. 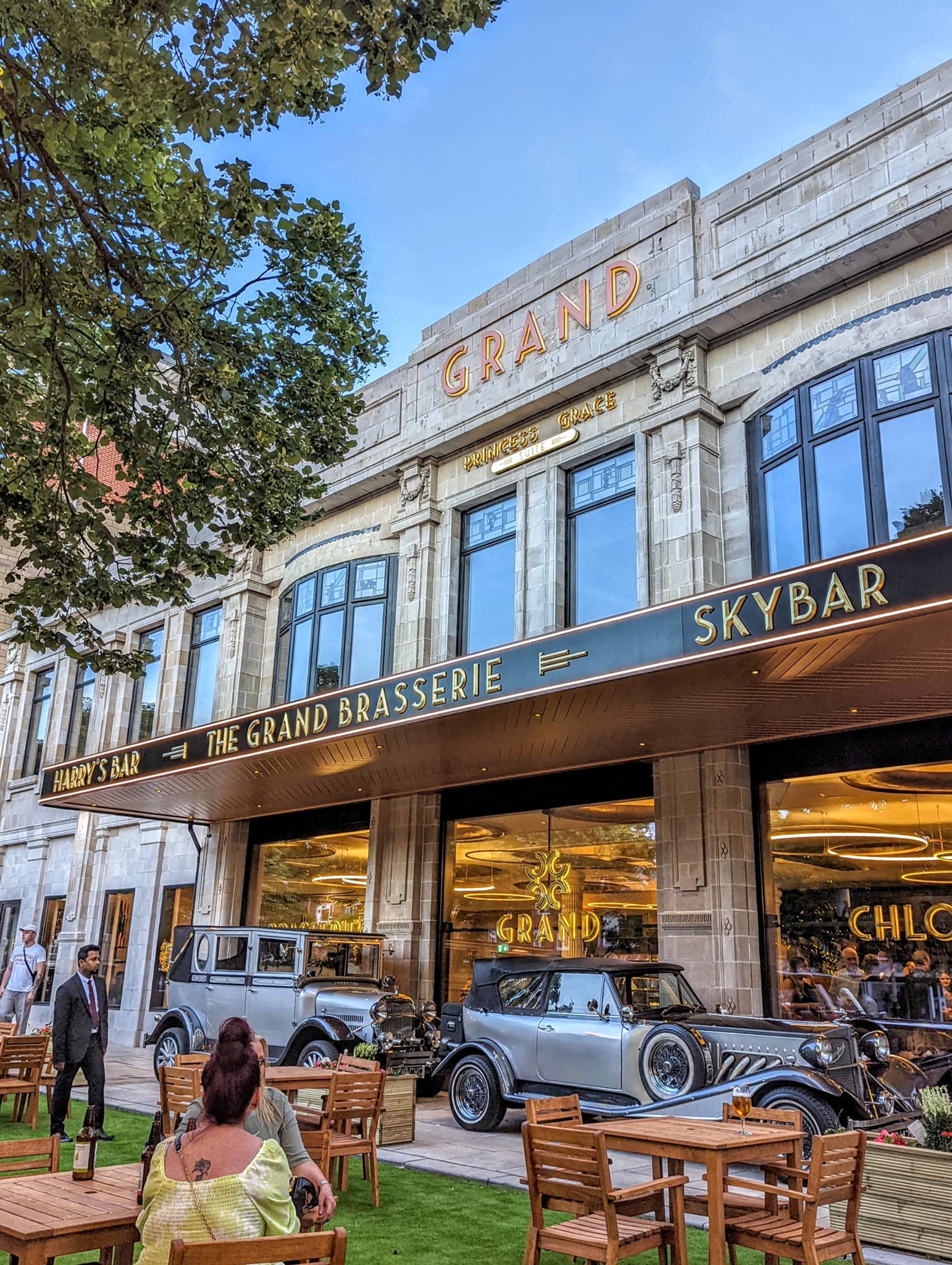 Guests enjoyed the official opening of The Grand in Southport. Photo by Mark Shirley owner of Shift F8 Photography

It was created in 1923 as a car showroom and garage designed by Richard Woodhead, and celebrates its 100th anniversary next year.

In 1938 it was repurposed and largely rebuilt as The Grand Cinema, designed by George Edward Tonge. It screened its final movies in 1966.

One of the building’s most unique features was its beautiful stained glass windows on the first floor featuring Disney characters, which have now been lovingly restored.

The ground floor of The Grand was reopened earlier this year with original 1920s cars outside, flapper girls and 1920s music inside, and a return to the roaring ‘20s feel. 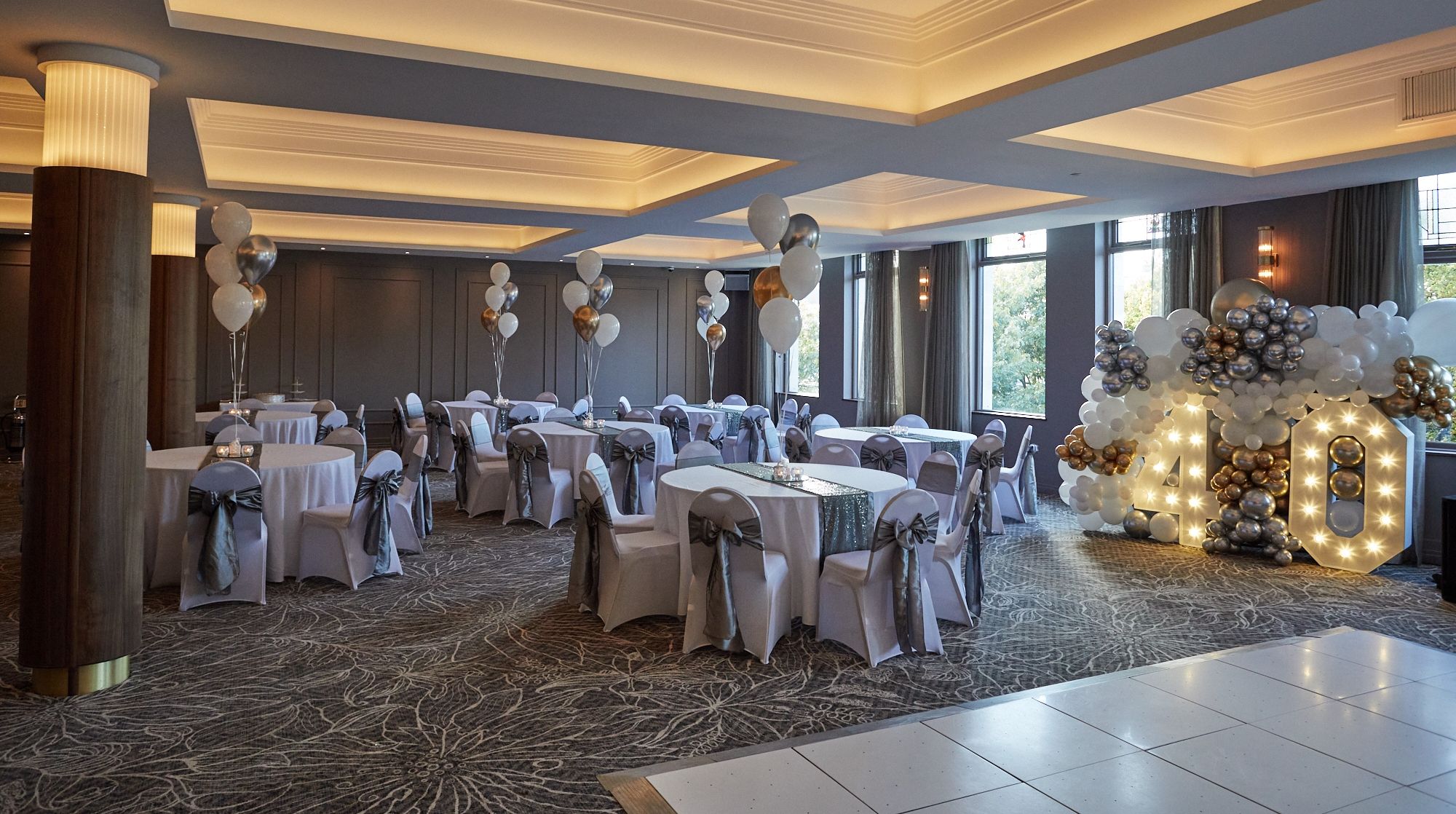 This Friday (14th October) will see the opening take place on the first floor of the building, The Princess Grace Suite, an elegant 250-seat space which is perfect for weddings and other functions.

The Sky Bar and Harry’s Bar on the top floor are due to open in Spring next year.

Millions of pounds are also being spent to restore more of Southport’s treasures from the 1920s and 1930s.

Perhaps we need to spend more time looking back on what our town was like back then?

You can enjoy a sense of it from the magnificent paintings created by Italian artist Fortunino Matania. 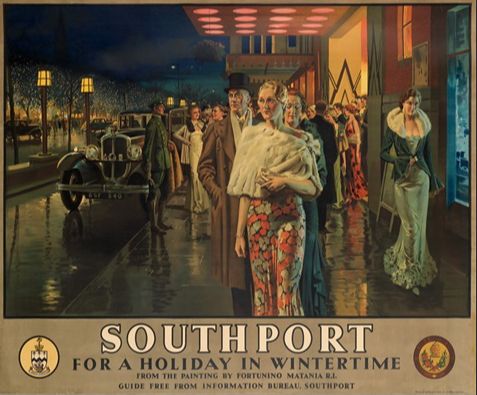 As £38.5million flows into Southport for a series of Town Deal projects, followed by an estimated further £400million in private investment, is a return to the feelings generated by Southport’s roaring ‘20s and ‘30s what Southport should be actually striving for, rather than a return to the Victorian era?

One Fortunino Matania painting, Southport in Wintertime, depicts a glamorous crowd of people leaving the Garrick Theatre on Lord Street.

The impressive art deco building book-ends the other end of Lord Street to The Grand. 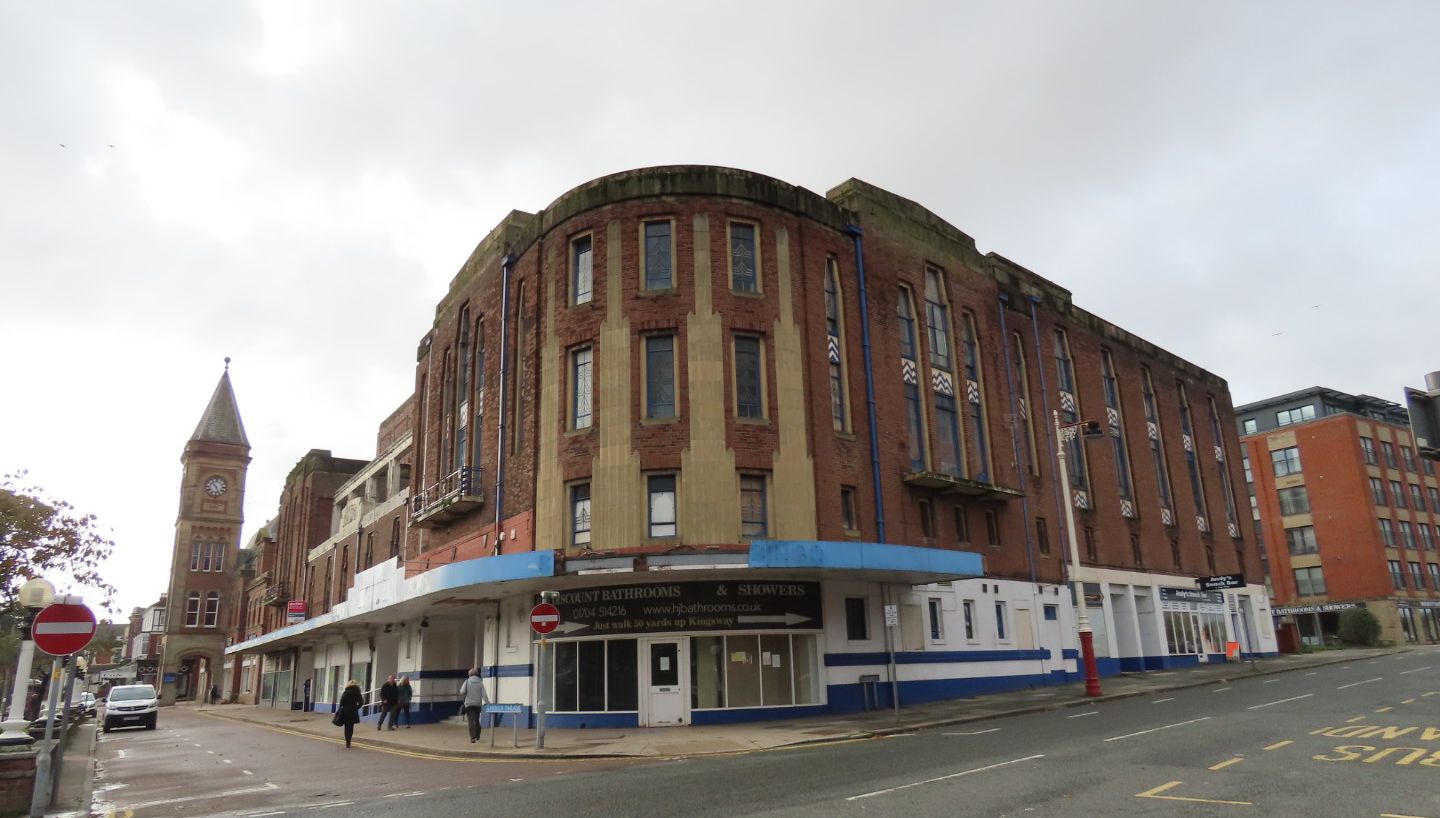 Multi-million pound renovation work is similarly taking place there too with the ambition of bringing back the glory days to a site which was most recently home to Mecca Bingo, and which boasts huge potential.

Right at the centre of Lord Street, on the corner of Nevill Street, Loungers UK Ltd has announced its intention to invest £1million in the renovation of the former Waterstones bookshop site into a new restaurant and bar.

The imposing building was constructed in 1925-7 and was designed by Palmer & Holden, in association with Finchett, Lancaster & Archer of London. 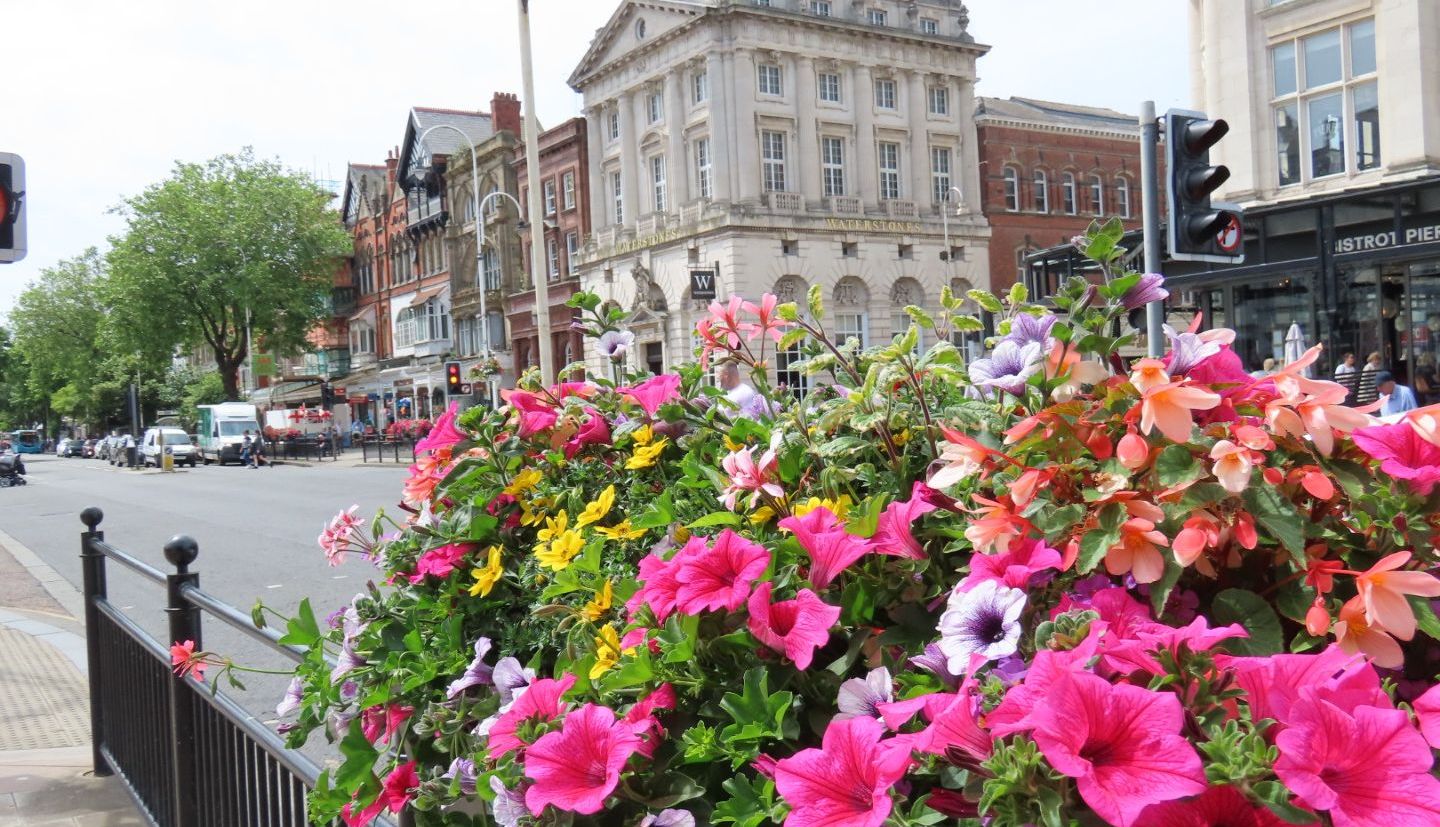 Another remarkable Fortunino Matania painting shows a Venetian Carnival taking place on the Marine Lake in Southport. How good would it be to see this event return?

You can imagine the scene. While opera played at the nearby Garrick Theatre on Lord Street, the newly completed Venetian bridge across the Marine Lake was the perfect backdrop to Venetian themed gala evenings, complete with gondolas. The Italian artist, Fortunio Matania, elegantly captures the mood in his painting from 1937. 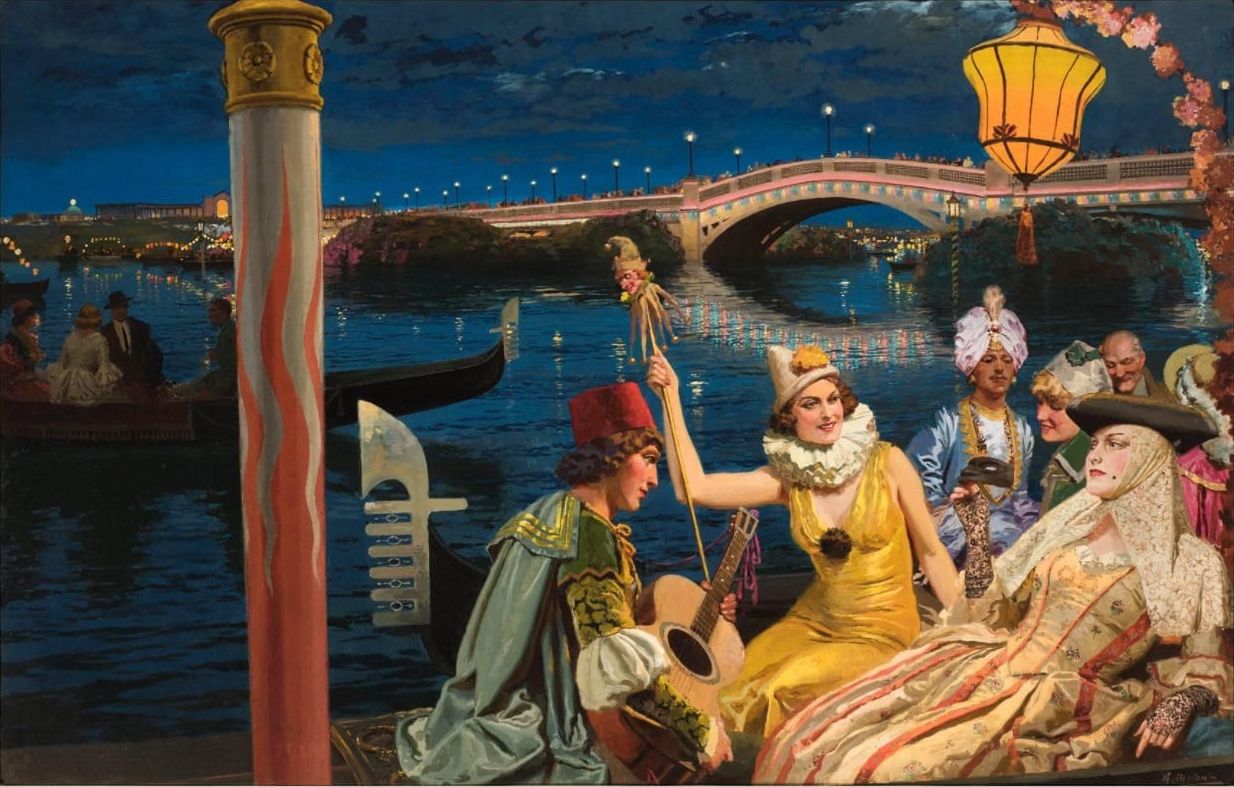 While opera played at the Garrick theatre on Lord Street, the newly completed Venetian bridge across the Marine Lake was the perfect backdrop to Venetian themed gala evenings, complete with gondolas. The Italian artist, Fortunio Matania, elegantly captures the mood in his painting from 1937.

Behind the bridge, in this old photo of the town, you can see the magnificent Southport Sea Bathing Lake, which opened in 1928. 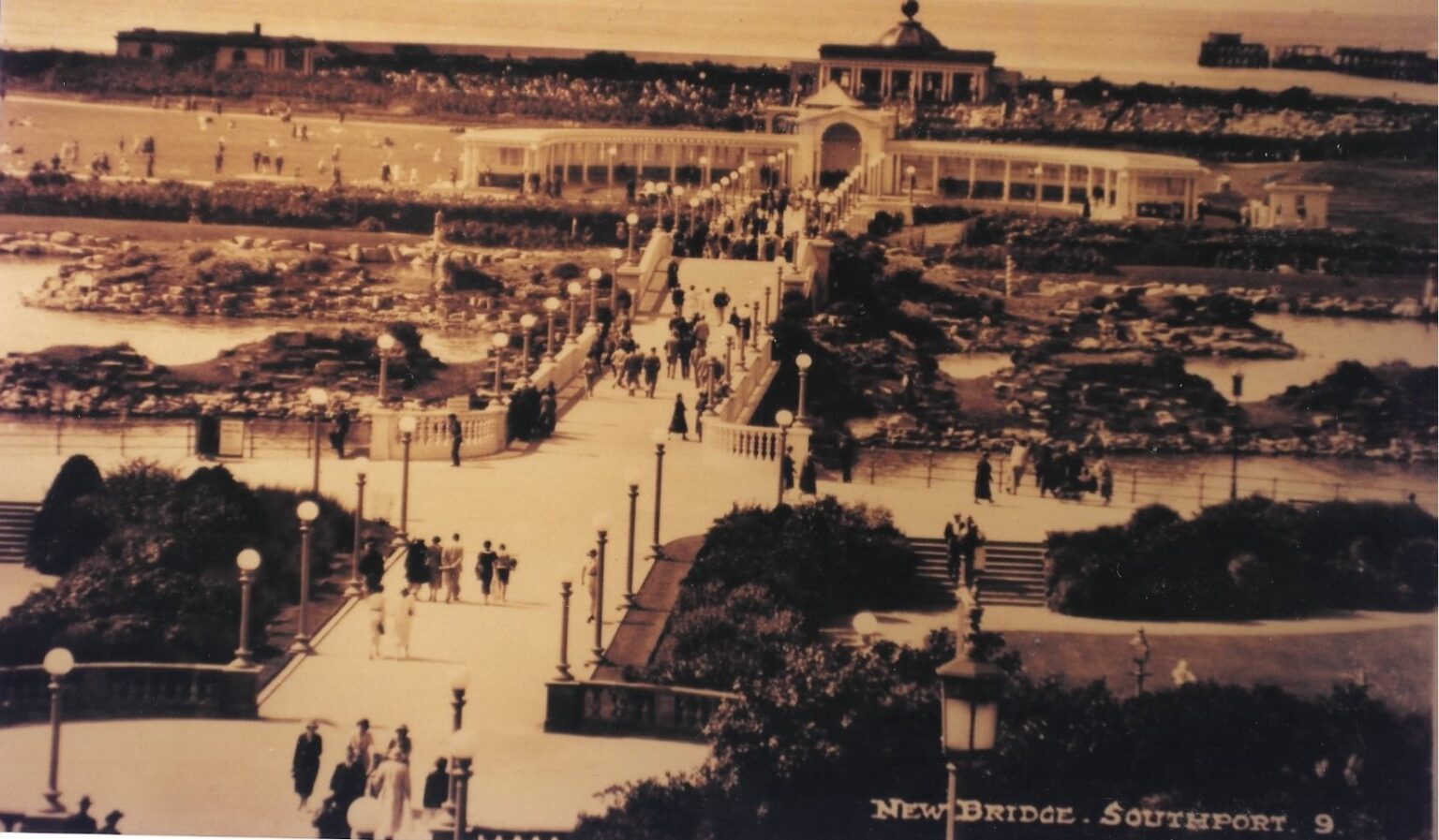 The newly constructed Venetian Bridge over the Marine Lake at Kings Gardens in Southport.Holiday makers were making their way over the bridge to the old Southport Sea Bathing Lake in the distance. The bridge was built in around 1930.Nearby is Southport Beach, where, in 1926, Sir Henry Segrave set the world land speed record with his Sunbeam racing car which roared to a speed of 152mph, putting Southport on the world map. Today, the Sir Henry Segrave pub bears his name.

Close to that is stands Southport Pleasureland, which has entertained generations of local families and visitors since operating from that site in 1922.

Today, tens of thousands of visitors enjoy their days out at Southport Pleasureland every year, with owner Norman Wallis this year investing in the Big Wheel Southport, a 35-metre high illuminated observation wheel, and a £1million Viking adventure golf attraction.

While the attractions may be different, the sights, the sounds, the enjoyment and the feeling that people leave Southport with are similar.

As The Princess Grace Suite opens at The Grand this Friday, expect more celebrations, more sophistication, more glamour – and more signs that the roaring ‘20s and ‘30s are back in style in Southport!