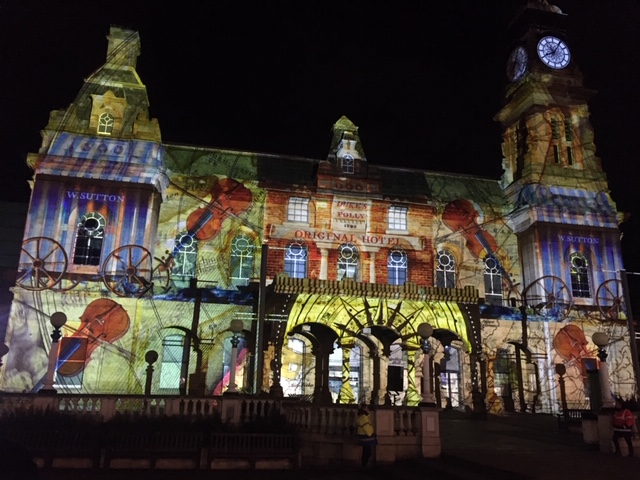 Crowds were wowed by ‘sensational’ displays that lit up The Atkinson in Southport last night.

It was the final part in a trilogy which also saw displays at Waterloo Town Hall on Friday and then Bootle Town Hall on Saturday.

The Nightingale’s Song dazzled residents and visitors as part of Sefton Council’s Borough of Culture year.

The light shows brought by Illuminos portrayed the history of the borough through eye-catching light displays on the civic buildings. The Atkinson in Southport was lit up by The Nightingale’s Song, part of the Sefton Borough of Culture celebrations

Before the main shows, crowds witnessed the buildings being lit up through the ‘Words of Wisdom’ project by Formby based Windmills Foundation.

Their ‘Words of Wisdom’ project is all about engaging with primary schools in the borough in cultural and social activities while linking them to isolated elderly residents in Sefton and has received Borough of Culture funding. Waterloo Primary School, Bedford Road Primary School in Bootle and Linaker Primary School in Southport all took part in the project early this year.

“Considering the current national circumstances, a big thanks goes to everyone who made the effort to attend any of the shows, they were not let down.

“We will aim to bring this event back to Sefton in the future to enable more of our residents to enjoy this spectacular show – however, we will do this at the right time.

“We are also reviewing the Borough of Culture programme and the proposals of our communities and partners given current circumstances and will provide updates in due course.”

The Borough of Culture (BoC) title is awarded by the Liverpool City Region’s Combined Authority to one of its six local authorities (Halton, Knowsley, Liverpool, Sefton, St Helens and Wirral) on a rotating, annual basis. Sefton has the prestigious honour for 2020.