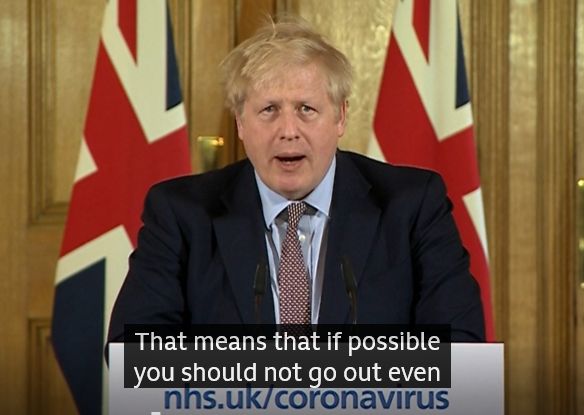 People in Southport and across the UK have been urged to avoid all ‘non-essential’ contact with others.
Prime Minister Boris Johnson revealed huge changes to life for millions of people, as he urged radical action to stop the NHS from being swamped.
Large gatherings will no longer be supported by police or other emergency services, putting the future of many major events in doubt.
But schools have not been closed, unlike in other European countries – for now.

The news was met by surprise by some in Southport.
Laura Cain told Stand Up For Southport: “Don’t make sense how he’s not closing schools.”
Joanne Porter asked: “Are schools not large gatherings of people?”
Pat Murphy said: “It’s interesting – the advice is for people not to go to cafes, pubs, theatres etc, but schools stay open. Hey ho.”
Francesca Falbo Sahonta said: “Schools should be closed. More and more children are getting infected. They should see the mistakes made by other countries like Italy at the beginning and now it is out of control. Let’s not get the UK to that point before anyone makes the right decisions! Before it’s too late!”

People called for more information to be given to those working in the entertainment industry.

Jan Hayes said: “No information for us people in events, who make a living from mass gatherings, yesterday I lost three bookings and £500. Very scary times as I don’t know if I will have a job and have 20 other people relying on me! We need information and help!”

Boris Johnson said everyone should avoid contact that is not absolutely necessary – with restaurants, bars and cinemas and travel off limits, and an end to large gatherings.
The restrictions could last for the next 12 weeks, but possibly longer.
Mr Johnson said that meant ‘you should not go out, even to buy food or essentials’ – and acknowledged he was ‘asking a lot’.
Entire households should self-isolate for two weeks if one person has been showing symptoms, and older people should prepare to stay away from risks for months to come.
There have been 1,543 positive tests for coronavirus in the UK as of 9am today, up from 1,372 yesterday. The death toll has risen to 53 after the first fatality in Wales.
WHAT do you think? Join the conversation in our Stand Up For Southport Facebook group.