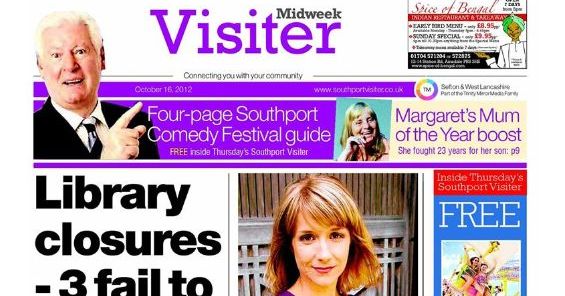 Reach plc has announced the permanent closure of the Midweek Visiter free newspaper.

The firm, which also publishes titles including the Liverpool ECHO, Manchester Evening News and Daily and Sunday Mirror, announced the news yesterday.

The paid-for weekly Southport Visiter, which has been published in Southport since 1844 and is the sister title of the Midweek Visiter, will continue to reach the news shelves every Thursday.

The Midweek Visiter, named as 02 North West Free Distribution Weekly Newspaper of the Year in 2016, was initially launched 40 years ago in Southport. Its coverage expanded in recent years to include parts of Formby and Crosby after the closure of the Formby Times and the Crosby Herald newspaper.

The Midweek Visiter was among a number of Reach plc free newspapers which saw publication suspended after coronavirus was declared a world pandemic on March 11. Reach confirmed yesterday afternoon that it will resume the printing of all five editions of the Manchester Weekly News. The editions for Trafford, Tameside, Wilmslow, Salford and Stockport will return from September 9.

However, four other free titles which were suspended at the start of the pandemic, including the Midweek Visiter, will not return. The publisher said that it would continue to provide news in Southport via its paid-for title.

“We are pleased to bring back the Manchester Weekly News with all five editions returning next month,” said a Reach spokesperson.

“The free model was already challenged before Covid and it would be uneconomic to resume publication of four of the titles we suspended in April, however Reach continues to offer digital options for readers and advertisers in these areas as well as our paid titles in the Midlands and Southport areas.”