Marine Drive in Southport remains closed today, a week after a lorry collided into Southport Pier, which runs over the busy seaside route.

Inspectors visited the site yesterday and insist that Sefton Council will take a safety first approach before vehicles are allowed to return to the area.

In the meantime, pedestrians are still able to walk along Southport Pier, and to enjoy the amenities there including the Southport Pier Pavilion.

A Sefton Council spokesperson said: “Following an inspection on Monday, September 13, repair and restoration works will continue to take place on the underside of Southport Pier.

“This means Marine Drive will remain closed until works are completed.

“While we apologise for any delays these essential works may cause, the safety of our pedestrians and road users remains paramount.”

A section of Marine Drive in Southport was closed last Tuesday (7th September) after a lorry collided with Southport Pier.

The collision saw Marine Drive closed between Southport Pier and the Esplanade. 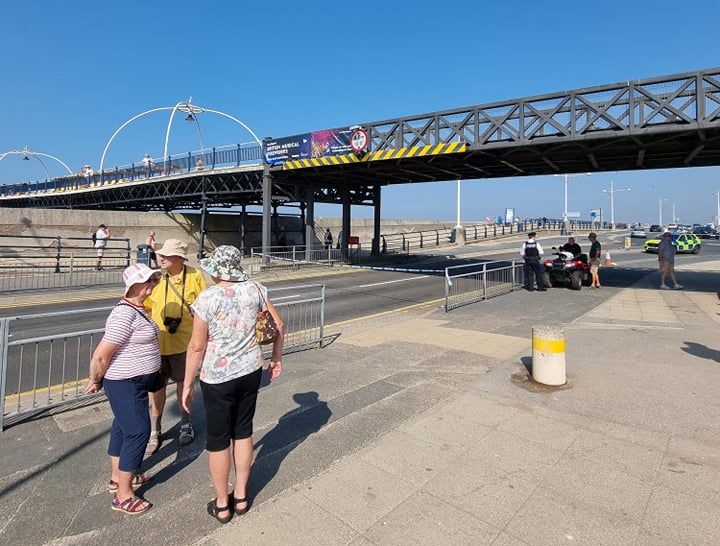 A lorry collided with Southport Pier in Southport

A Merseyside Police spokesperson said: “We were contacted at just before 1.20pm on Tuesday, following reports a wagon had been in collision with Southport Pier.

“The vehicle is believed to have left the area following the incident. The driver has since been traced and is in the process of being spoken to by officers.

“There are no reports of anyone being injured.

“There are road closures in place and motorists are advised to avoid the surrounding area.

“Enquiries into the collision are ongoing.”

A Southport Pier Pavilion spokesperson said: “Following the extremely unfortunate event of the lorry collision into our pier we do remain open to the public.

“The bridge is three separate structures, so access is still open at the right hand gate.

“Our small train will still be running from halfway point (stairs to beach) to the pavilion.

“Thank you for your patience and also well wishes. This is all we needed!”