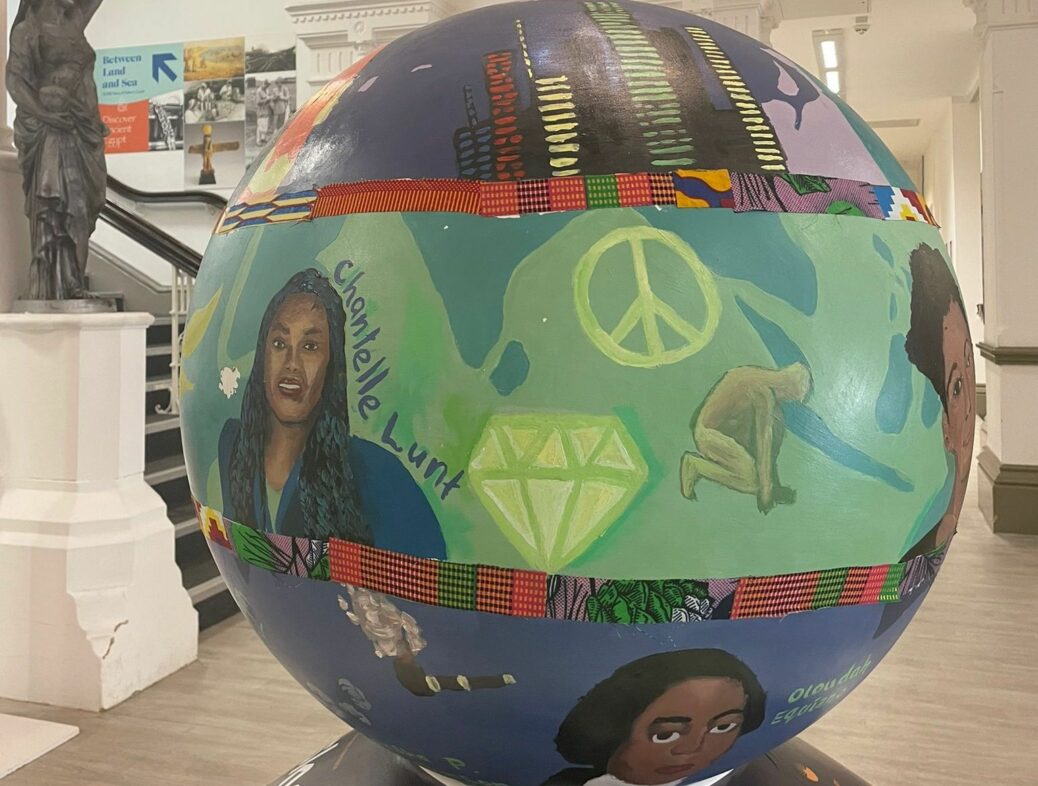 A stunning globe created by people in Southport to promote racial justice has now taken pride of place in The Atkinson on Lord Street in Southport.

The artwork, which has been created by Southport Against Racism and Christ The King High School in Birkdale, is part of The World Reimagined initiative, which aims to transform how we understand the transatlantic trade in enslaved African people and its impact on all of us, so that we can make racial justice a reality.

This is not ‘Black History’, this is all our history.

The globe in Southport also includes inspirational quotes including: “Education is the most powerful weapon which you can use to change the world” (former South African President and anti-Apartheid campaigner Nelson Mandela).

A Southport Against Racism spokesperson said:

“The globe is part of the national art initiative created by The World Reimagined for racial justice.

“Southport Against Racism was chosen by Sefton to represent them for the Community Globe. “We decided to collaborate with Christ the King High School as education is key to our aims and objectives. 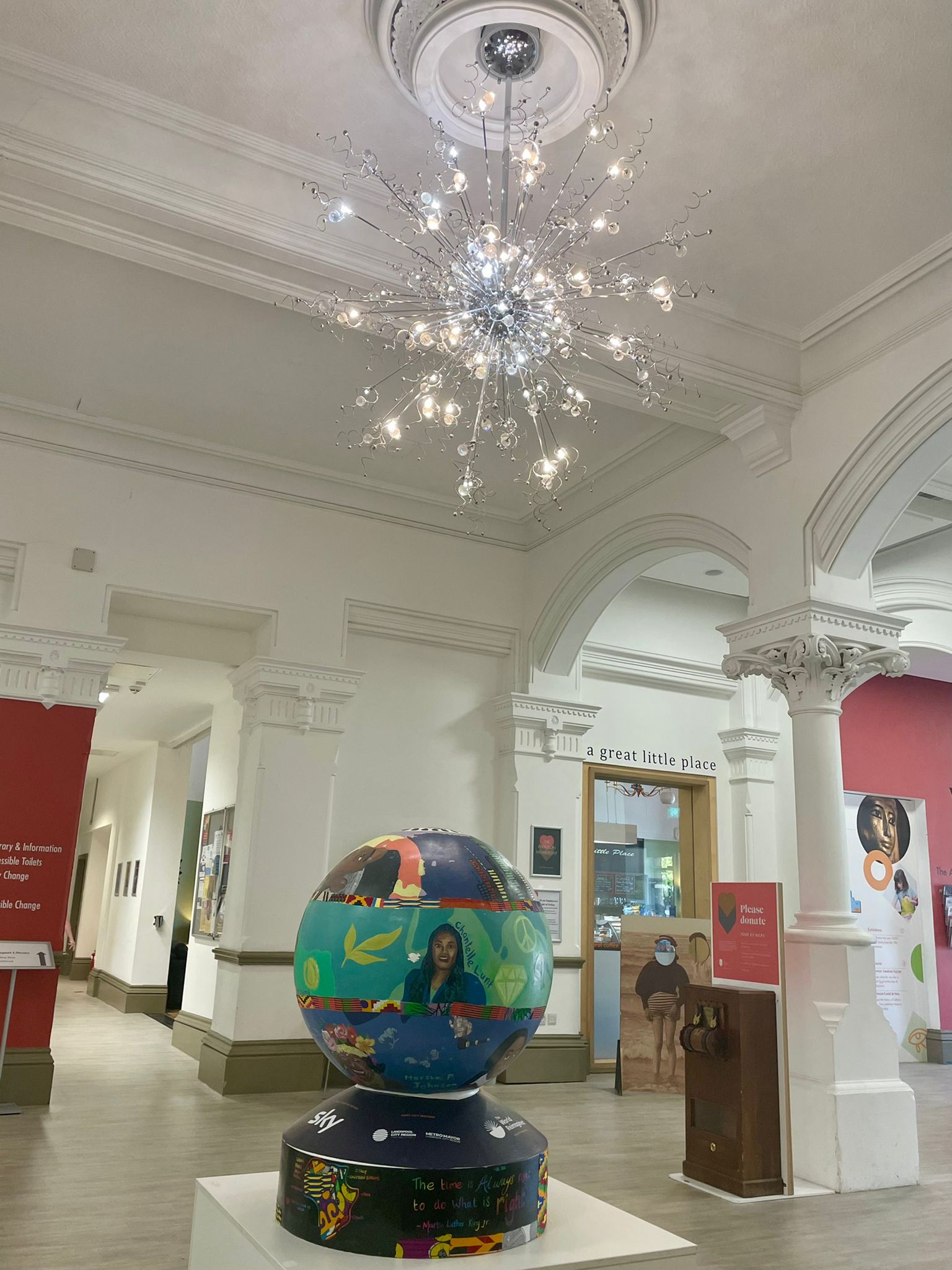 A stunning globe created by people in Southport to promote racial justice has now taken pride of place in The Atkinson on Lord Street in Southport. Photo by Claire Brown of Andrew Brown Media

“We are so proud of all those involved and want to thank everyone, especially Kenny Thompson for helping me in the early stages, Sandra Sumner for attending Christ the King School to mentor the students and Tan Stanton-Britton for guiding the students with their artwork.

“We would like to say a huge thankyou to the teaching staff at Christ the King, especially Ms Martin and Ms O’Hanlon. But mostly to the absolutely talented students who created the globe.”

“The Year 9 and Year 12 students of Christ The King Catholic High School and Sixth form College have absolutely enjoyed working with Southport Against Racism community group on this truly inspiring World Reimagined project.

“They have learnt so much about our shared history rooting from the transatlantic slave trade and the legacy on our community.

“The World Reimaged has helped our students uncover truths and gain a positive understanding of cultural diversity and in particular role models who have been an inspiration past and present.

“We are hoping for a future of inclusivity that celebrates cultural diversity enriching our community.” 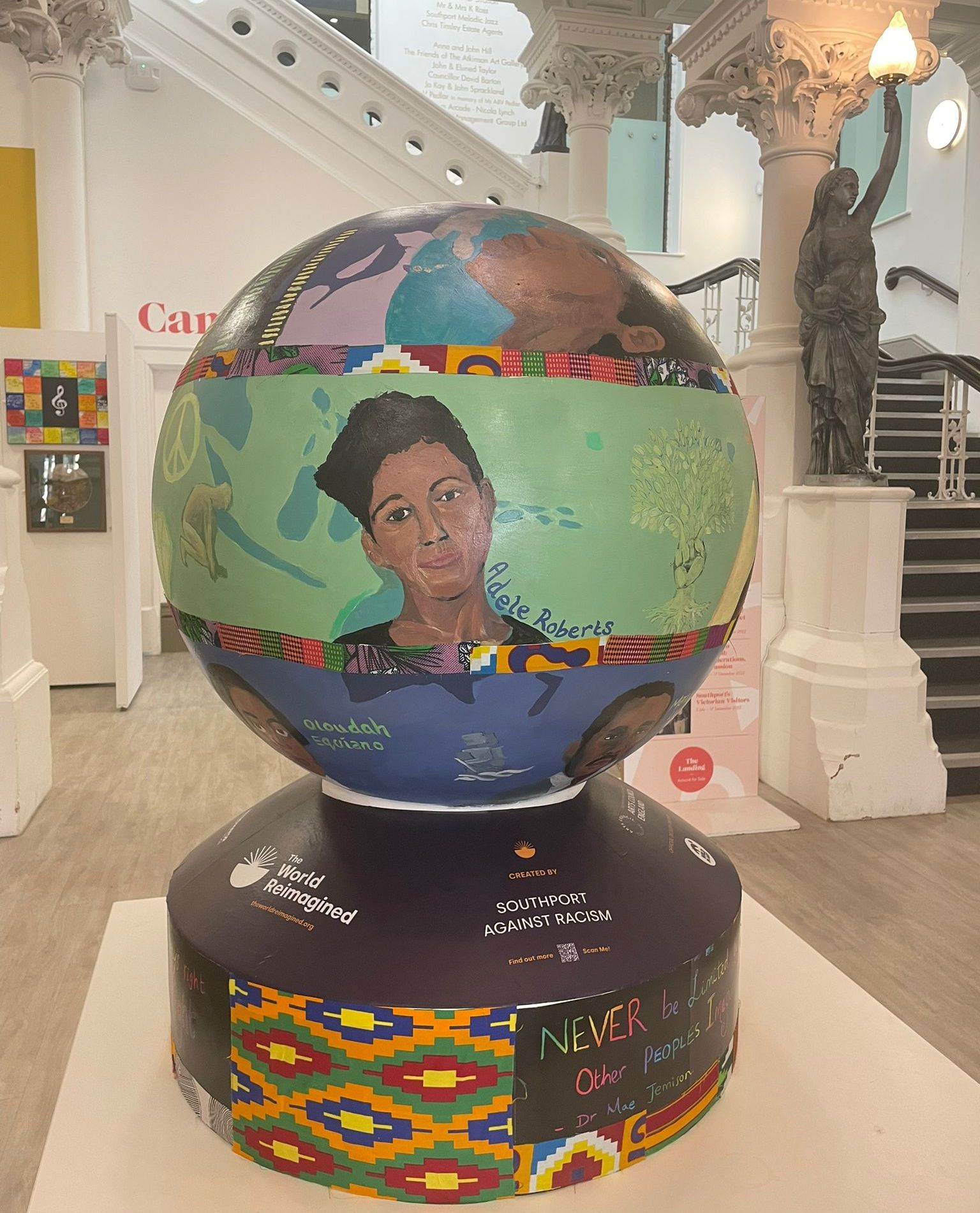 A stunning globe created by people in Southport to promote racial justice has now taken pride of place in The Atkinson on Lord Street in Southport. Photo by Claire Brown of Andrew Brown Media

The World Reimagined scheme has seen ten large globe structures make up a free public art trail across the Liverpool City Region, bringing to life the reality and impact of transatlantic slavery and inviting the public to think about ways to make racial justice a reality.

Running from 13 August to 31 October, there will be a walking trail of five large globes located around Liverpool city centre, with a further large globe in prominent locations in Sefton, Halton, Knowsley, St Helens and Wirral.

The ten large globes will be placed at the following locations:

Commissioned artists have created thought-provoking globes responding to themes ranging from ‘Mother Africa’ and ‘The Reality of Being Enslaved’ to ‘Still We Rise’ and ‘Expanding Soul’.

The project forms part of the Liverpool City Region Combined Authority’s Race Equality Programme, which was established by Mayor Steve Rotheram in 2020.

The wider programme also includes a Race Equality Hub which is being co-designed with the local community.  With ring-fenced funding of £3.2million, this is the region’s biggest ever investment in tackling racial inequality.

“More than 1.6million people call our city region ‘home’ – and we’re making sure that every single one of them has the chance to be a part of this important moment in our shared history. Each of our six boroughs has helped to bring this installation to life and it’s on every one of us in our community to listen, to learn, and to reflect on the important lessons it can teach us about the past – and the future – of our home.

“This is an opportunity to give a platform to more conversations around racial injustice and to show people that not only are we learning from the lessons of our history, but we’re working hard to shape a better future for everyone in our city region – where no one is left behind.”

The project has been brought to the region by the Liverpool City Region Combined Authority, which is the main local sponsor, and is working with its local authorities to co-ordinate all activity across the region’s six boroughs.

The region-wide trail aims to provide an enjoyable and thought-provoking learning experience for people of all ages.

It will be the centre of a broader learning and engagement programme, with schools, community groups, and cultural institutions from across the city region taking part.

In addition to the larger globes, another 41 smaller learning globes have been created by 30 schools and 11 community organisations across the region, including the globe at The Atkinson in Southport.

Through the education and art programme, the project will be rooted in local schools and communities to facilitate dialogues around racial equality and justice and linked deeply to where people live.

“This hugely ambitious and thought-provoking project will challenge us all to think about the legacy of our city region’s past and its continuing consequences today.

“The high-profile locations of these globes will ensure that the project reaches as many people as possible and should kickstart a public conversation on the continuing impact of the transatlantic slave trade.

“At the same time, it will be a celebration of creativity and I am sure that these incredible artworks will be a huge attraction for people from across our city region and beyond.

“We should never underestimate the power of culture to challenge, entertain and educate. I can’t wait for the project to open to the public in a couple of weeks.”