The spectacular new Water and Light Show in Southport will see shows taking place seven days a week, up to 10.30pm each night, with the installation of over a hundred jet fountains plus six laser systems.

The new attraction, featuring “a wide range of exciting thematic and musical shows”, will be situated on the Marine Lake, directly in front of the brand new Marine Lake Events Centre (MLEC).

The £75million new MLEC is being partly funded through the Southport Town Deal initiative to replace the former Southport Theatre and Convention Centre, which closed for the last time in March 2020 and has since been deemed no longer fit for purpose.

Sefton Council is leading the project to build the new Marine Lake Events Centre plus the £3.3million Water and Light Show.

The new attractions are estimated to attract an additional 500,000 new visitors to the town and bring in an additional £18million to the local economy each year, providing a huge boost to local hotels, restaurants, shops, bars and other businesses.

A full planning application for the scheme has now been submitted, which has been drawn up by AFL Architects working with a number of partners.

In the application, they said: “The Water and Light Show system will be capable of offering a wide range of exciting thematic and musical shows.

“The initial vision is to create several shows, each approximately eight minutes in length.

“During the daytime, fountain shows can be offered. This will expand to become multimedia shows after dark.

“The daytime show could use a wide range of musical styles, covering, pop, classical and experimental as well as original work composed for the Water and Light Show. These shows will be enhanced with lighting after dark. 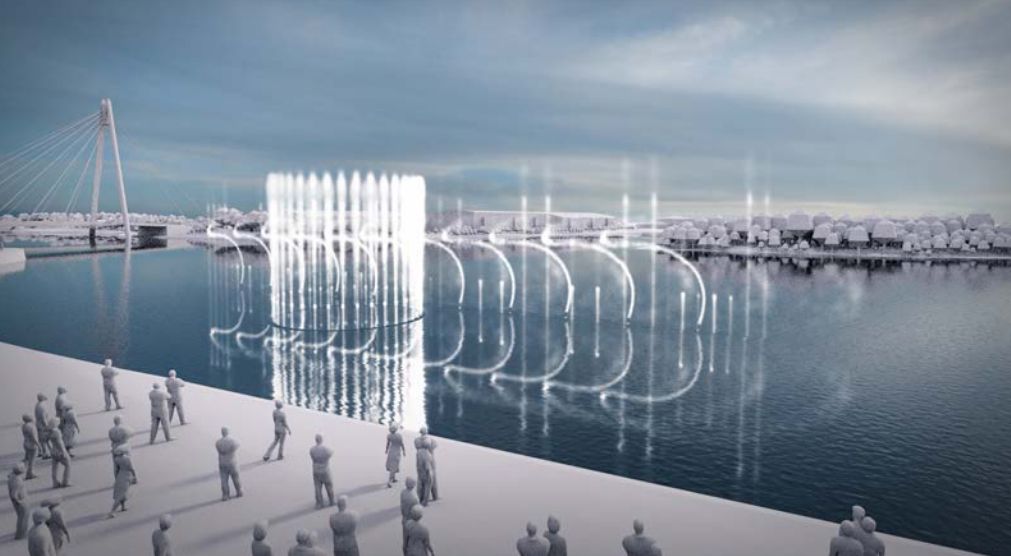 “For the multimedia shows, initially discussed themes include the History of Southport, Wildlife and Nature, as well as other themes based around Sport, Music, Culture, Technology and many more.

“The system will also be designed to offer seasonal shows for holidays and custom shows for events.

“In creating the show productions, the production team will engage with local artists and schools.”

The Water and Light Show will consist of; fountain effects, water effects, underwater lighting, laser lighting, video projection and audio systems creating a large spectacle aimed at being “enjoyable for all”.

The Water and Light Show will be made up of the

line and a circle)

The Marine Lake is filled and drained via sluice gates with sea water, and also captures rain water. It is periodically drained and filled to maintain enough salinity to suppress algae growth to make the lake suitable for water sports.

The Marine Lake has changes in depth over time, so all the show systems will be installed on floating barges, which are held in position by submerged pilings.

There will be 31 barges in total, each barge is formed of modular plastic floatation units with a stainless-steel frame.

These will be designed to minimise visible profiles above the water level.

All the barges are connected to the MEP room within the new Events Centre with submersible cables.

Fibre optics and high-pressure hoses connect to some of the barges. The control racks and contract cabinets will be installed within the MEP room. A distributed Audio system is installed in the Audio area in front of the new Events centre, which is formed of column speakers mounted on lamp posts, and lower-level speakers mounted with the raised plant beds.

The fountains are formed as a line of 58 jets, and a circle of 36 jets, the giant 30m jet is at the centre of the circle.

The three-water screens are immediately behind the line of jets with a separation of 40m.

The whole fountain area is 100m x 35m and is located 20m from the shore line of the new events centre.

The area will be surrounded by a protective floating barrier.

The three supporting barges (laser, video, lighting) will be located close to the southern island in Marine Lake.

The installation will leave a 60m clear channel for water sports.

The fountains will require periodic maintenance, and require daily operation to prevent algae growth which could stop stopping operation.

The design incorporates materials which are suitable for installation in salt water.

The lights and laser will only operate after dark, when close-by airfields will have closed.

The operator will have agreement for operation from the Civil Aviation Authority and Air Traffic Control.

The sound system for the show will limit its volume and not operate past 10.30pm.