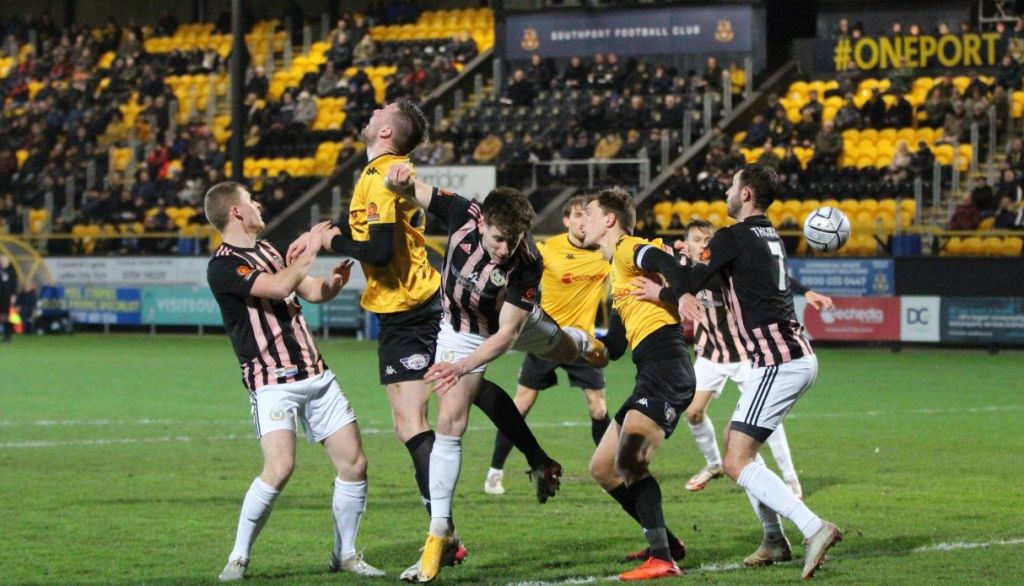 Southport FC Chairman Ian Kyle has attacked the ‘keyboard warriors’ who criticise the club on social media as he praised the ‘actual fans who support from afar week in week out’.

He spoke passionately of himself and other board members who have put in “a massive amount of hours and effort to keep the club afloat” during the past three years of the Covid-19 pandemic and after the departure of shareholder and director Phil Hodgkinson in 2019.

He said his door is ‘always open’ for anyone keen to invest in the club’ as he continues with the ambition of targeting promotion to the National League.

Mr Kyle also spoke warmly about “all of the volunteers who make Southport FC possible”.

He was writing in his programme notes ahead of Southport FC’s final home game of the season on Saturday, a 1-1 draw with Telford.

The Sandgrounders enjoyed an impressive season, losing just two home games all season and earning a lofty position in the play-off places for a number of months, until a loss of form towards the end of the season.

Southport FC are currently in 12th place, with 54 points from 41 games, with a young team – and an ambition to strengthen in the summer – promising good things ahead for next season.

Ian Kyle wrote: “It has to me become all the more apparent the difference between the keyboard warriors who post almost with glee when things don’t go so well, as compared to the actual fans, turning up or supporting from afar week in week out. They can see what we are trying to do.

“So what of the Board? We have all put in a massive amount of hours and effort over the last two to three years to keep the club afloat and on track during a very difficult and unprecedented period. We want to win, to be successful.

“One poster on Portchat suggested that we need a more ‘balanced group of people’ who are prepared to ‘put their money in’.

“As I indicated in my last notes, such people, if they are out there, are not at present knocking the door down.

“If there are people out there who want to get involved for the betterment of the Club, my door is always open.

“In the meantime, Steve, Liam and I will continue to put in all of our time and effort into doing the best we can for Southport FC. We want success. We want promotion to the National League. “We will keep doing whatever we can to achieve that goal without ever risking the survival of this Club.

“Enjoy your summer and see you next season!”

He also praised Southport’s incredible group of volunteers who do so much to keep the club going.

He said: “Off the field, we have a similarly strong team building up steam with Steve, Mark, Claire and Maz along with all the staff who are working their socks off to ensure that we are continually striving to provide as good a matchday experience as we can get, aided of course by The Corridor providing the indoor catering and the now famous pen-friends of the Piers Morgan family, Lourdes providing the outdoor catering.

“It would be remiss of me not to thank all of the volunteers who make Southport FC possible. From Hamish and Christine, through Rob and Julia and  the rest of the media team to everyone who gives up their time through the week to clean and carry out running repairs, the matchday volunteers who man the turnstiles and ensure the day goes smoothly, Anthony who has saved us a fortune on lost balls amongst his many jobs and Dave Barnes who I am sure actually lives in a secret apartment at Haig Avenue drawing up “to do lists” for everyone to keep the Club going whilst living on McDonald’s burgers and counting his steps for the day.

“My last big thank you goes to you, the fans who have supported us so well this season. It hasn’t always been easy, I appreciate it. We have suffered through injuries, bad luck and poor refereeing decisions (such as the third goal against Alfreton), and the odd “blip” such as the Chester and Kidderminster games. At the time of writing this however we have lost only two games at home all season. That speaks volumes.

“We have been complimented everywhere we have gone for the levels and volumes of support that have followed us. Long may that continue!”

Southport FC play their final game of the season, away at Bradford (Park Avenue), this Saturday (7th May 2022).