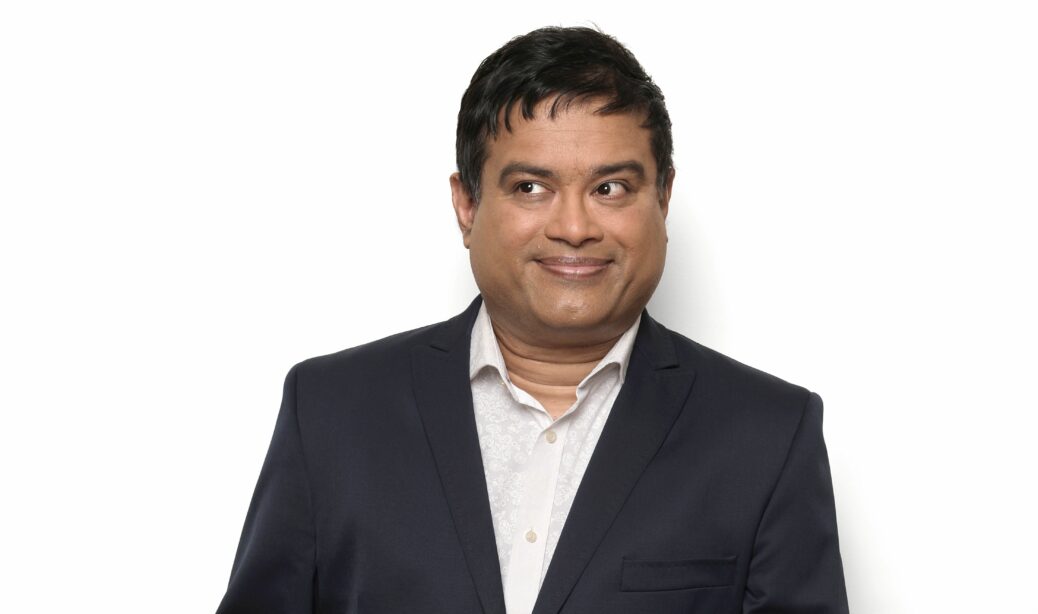 The legendary Paul Sinha is making his much-awaited return to Southport Comedy Festival this Friday (7th October 2022) with his best ever tour name – One Sinha Lifetime.

His Talking Heads-inspired title heralds his most ambitious and varied show ever.

The explosion of ideas, comedy and performance skills will come as no surprise to fans of this multi-talented star, who many will instantly recognise as one of the six Chasers on cult ITV show The Chase.

But Paul has many strings to his bow – as a successful stand-up comedian, quizzer, doctor, broadcaster and more.

He is a familiar voice on radio with appearances on Radio 4’s Just A Minute and The News Quiz and on BBC Radio 5 Live’s Fighting Talk. His Radio 4 series ‘Paul Sinha’s History Revision’ won the Rose d’Or for radio comedy. He’s also appeared on television, on BBC’s QI and Would I Lie to You? and as a competitor on Taskmaster.

His One Sinha Lifetime show is one not to be missed, being heralded by the British Comedy Guide as in the top three shows from this year’s Edinburgh Festival.

Southport audiences are in for a treat!

Paul has built up a loyal following at Southport Comedy Festival over the years, performing in the Festival Marquee last year and elsewhere across the resort in previous years. He is delighted to be making up for lost time after missing out on live comedy due to the Covid-19 pandemic lockdowns.

In January 2020, Paul embarked on a national tour, his most ambitious show combining stand-up, music, hula-hooping and tales of romantic validation and neurological degeneration.

As it turned out, 2020 proved to be the wrong year to embark on a national tour. For everyone.

Undeterred, Paul is back, with the difficult second post-diagnosis album since doctors detected his Parkinson’s disease. It has not dulled his passion to make people laugh.

Expect a rich tapestry of japes and scrapes, triumphs and disasters, from a master storyteller.

Paul said: “I wouldn’t miss the Southport Comedy Festival for the world! I love performing in Southport.

“I have been to Southport quite a few times now, it is always really good there.

“This is an all-new show from last year. People coming will see something very different.

“One Sinha Lifetime is slightly tongue in cheek, a little bit of an autobiography.

“I do have a few songs in the show too – if you don’t like musical comedy then don’t come!”

He loves the title of his new tour but is too modest to claim the credit.

He said: “I am a Talking Heads fan, but the title came from a friend. When he said it, I thought ‘that is such a good pun’!”

The tour is going exceedingly well. To be judged to have performed one of the top three shows at the Edinburgh Festival is quite an accolade.

I asked him – what does it feel like to become an overnight success…?
Paul said: “I have been performing at the Edinburgh Festival for the past 21 years! This is the best feedback I have ever received. It is lovely to be recognised.

“For me, a good comedian gets better and better with each passing year.”

Despite his extensive catalogue of stand-up comedy shows and tours, many people who book tickets to see Paul still know him first and foremost from his regular TV appearances on The Chase.

He said: “I am realistic to know that a lot of people booking tickets go to see what ‘the guy from The Chase’ has to say.

“My stand-up comedy shows are very different to how I come across on TV. It is quite a big contrast. I am a lot darker on stage and a lot more adult.

“I have also got a brilliant support act with me this year, Bethany Black – she is absolutely superb. People will love her!”

“The stories are told with a constant light-touch wit… Parkinson’s hasn’t robbed him of his ability to do stand-up, it’s enhanced it” ★★★★ Chortle.co.uk