A brand new Aldi supermarket will be built in Tarleton.

West Lancashire Planning Committee last night gave its backing to the scheme, which will include a 1,254m² food store, a two storey office, with additional warehouse, staff and office facilities on the site of the former Bay Leaf Indian restaurant.

Local logistics firm GBA Services will build new offices on the same land, allowing it to expand its workforce without having to leave the area.

West Lancs Council Chief Operating Officer Jacqui Sinnott-Lacey had recommended the scheme for approval to councillors, saying: “The application is for a retail store and office building on the site of the Bay Leaf which is within the Green Belt. The proposed development has been identified as being inappropriate development in the Green Belt and as being harmful to openness. There would also be heritage harm as a result of the development.

A CGI of the new Aldi supermarket development in Tarleton

“However, the applicant has put forward very special circumstances to justify the development.

“I do regard the economic case put forward to bring significant benefits, and the improvements to visual amenity to bring moderate benefits, which I consider in this instance to outweigh the harm identified.”

The former Bay Leaf restaurant has become one of the area’s biggest eyesores since it closed.

The Bay Leaf was formerly known as the Rams Head Inn and parts of it are believed to date back to the 17th Century (it has a datestone of 1640). The building is included upon West Lancashire Borough Council’s list of buildings of local architectural or historic interest and entered upon Historic England’s Pastscape online resource as a ‘Post Medieval Inn’.

Aldi opened its first stores in the UK in 1990 and currently operates approximately 785 stores across the UK and Ireland.

The firm is able to achieve lower prices through an extraordinarily efficient operation, from the sourcing of its products, to the retail experience in store. In an ALDI store, you will not find hundreds of versions of the same thing. 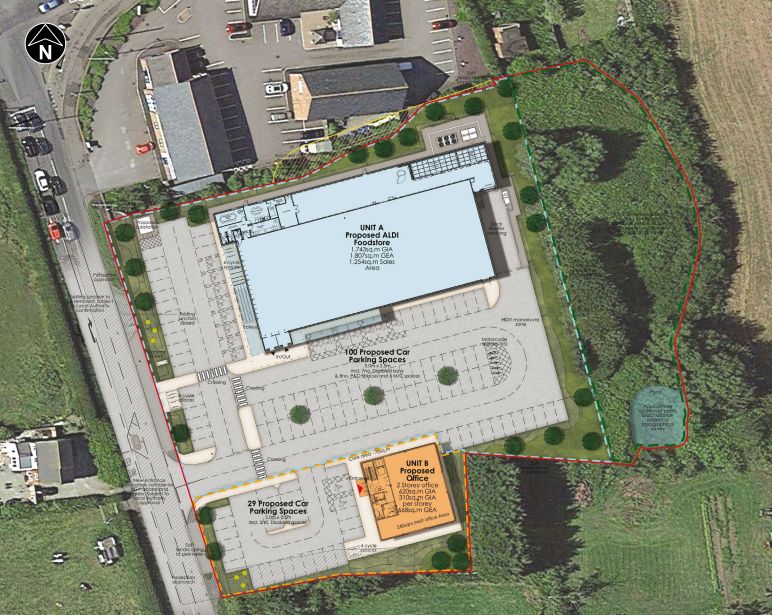 A CGI of the new Aldi supermarket development in Tarleton

The firm said: “Aldi  focuses on quality rather than quantity; stocking a range of groceries that includes everything shoppers need, every day of the week. This allows Aldi to get the lowest prices from suppliers – then pass on the savings to customers with quantity discounts.

“As a foodstore with predominantly own labelled brands, Aldi would not compete directly with existing businesses. For instance, it does not have an in store butcher, fishmonger or café and does not sell cigarettes or tobacco products. This allows local businesses to flourish as customers link trips with the Aldi store and other local shops.”

Rival supermarket firm the Co-operative Group had previously failed in a High Court challenge against the scheme and was among those to raise objections this time.

The committee heard that an independent retail impact assessment was carried out which concluded that allowing the new store “would not have a significant impact on the vitality of existing retail providers in the area”, with the Booths store in Hesketh Bank and Tarleton’s smaller Co-op store cited as examples.

The development will also see a pedestrian crossing created on the A565 and pedestrian and bus improvements also carried out.

Subject to the council’s Director for Development and Regeneration and the Secretary of State making no objection, the development can now go ahead.