A stylish new barbershop has opened in Churchtown Village in Southport after a successful local businesswoman went back to her roots.

Mojos Barbers at 144a Cambridge Road, near Churchtown Lights, welcomed its first customers in the unit previously occupied by Pud.

It is owned by Lesley Morgan-Macbain, who already owns the House of Mojos hairdressers and the Barklays dog friendly cafe nearby.

Many people locally will remember the site as the home of Monica Frances hairdressers, owned by Monica Owen, which opened its doors in February 1967 and operated for 41 years, closing in 2008.

As a teenager, Lesley worked during Saturdays at the business and is delighted to be back at the site where she began her thriving career.

Her first customer at the new shop was Nick Owen, Monica’s husband.

As a mental health and autism awareness champion, Lesley will be hosting special quiet days for clients, both adults and children.

Mojos Barbers in Churchtown in Southport is now open. It is owned by Lesley Morgan-Macbain. Her first customer was Nick Owen, husband of Monica Owen, who owned Monica Frances hairdressers on the site between 1967 and 2008. Photo by Andrew Brown Media

Customers can enjoy all the top barbering techniques with a range of services on offer including barbering, wet shaves, nose waxing, ear waxing, and much more.

Lesley said: “I am looking forward to taking care of the guys in Churchtown!

“There is nowhere else in the area that offers cut throat shaving like we do.

“We also offer package deals for weddings, stag parties, and other events and groups.

“I am also an autism friendly barber and a mental health ambassador.

“I am going to have quiet days with a one-to-one service available to both adults and children, on Wednesdays and every other Sunday.

“On the other days we are open, it will be me and Harry McGrath working together. Another team member will be joining us in four weeks.

Mojos Barbers in Churchtown in Southport is now open. It is owned by Lesley Morgan-Macbain. She is pictured with Harry McGrath, who is working alongside her. Photo by Andrew Brown Media

“We offer an online booking system but walk-in appointments will also be available.

“I was a Saturday girl when I was 15 working in this building, when it was the Monica Frances hairdressers.

“Sadly Monica passed away last year but I still enjoy cutting her husband Nick’s hair, he is lovely.

“It was an honour for him to come in as my first customer.

“It feels very emotional to be back here again, it feels really good.”

Former traffic policeman Nick called in with his beloved dog, Betty, and was impressed with the new venture.

He said: “Monica and I got married in 1966 and then my wife opened Monica Frances hairdresser here in February 1967.

“We had two children, John and Charlotte, and were raising them while Monica was running the business. I was working as a police officer and it helped that I was working shifts.

“It looked very different back then! The railway and Churchtown Railway Station had closed, but the railway embankment was still there.

“We saw a lot of changes over the years! I remember the embankment coming down, and the doctor’s surgery over the road being built, next door to NatWest bank, which is now Peaky Blinders bar.

“When I first came to Southport, in 1963, the only thing that stood at what is now Churchtown Lights was a Stop sign!

“I am so glad that Mojos Barbers has now opened on the same site, although it is very different to how it was when Monica was here!

“I like Lesley, she is a superb hairdresser and barber.

“I realised the connection when I went to get my hair cut at House of Mojos last year and she told me how she had worked at Monica Frances as a Saturday girl.

“I hope it’s a great success for Lesley and I wish her all the very best.” 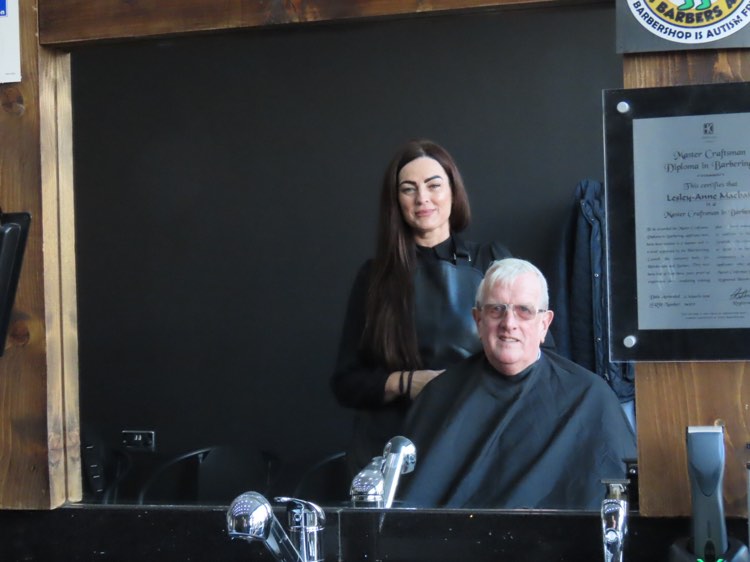 Mojos Barbers in Churchtown in Southport is now open. It is owned by Lesley Morgan-Macbain. Her first customer was Nick Owen, husband of Monica Owen, who owned Monica Frances hairdressers on the site between 1967 and 2008. Photo by Andrew Brown Media

Mojos was established in 2006, with Mojos meaning your ‘inner confidence’.

Lesley wanted her venture to ensure her clients tap into your Mojo and help them to ‘get their mojo back’.

She has since gone from strength to strength and added more services along the way.

Mojos Barbers, at 144a Cambridge Road, Churchtown, will be open 3pm-7pm on Wednesdays; 9.30am-7pm on Thursdays and Fridays; 8am-3.30pm on Saturdays; and 11am-3pm every other Sunday. Tuesdays will be training days.