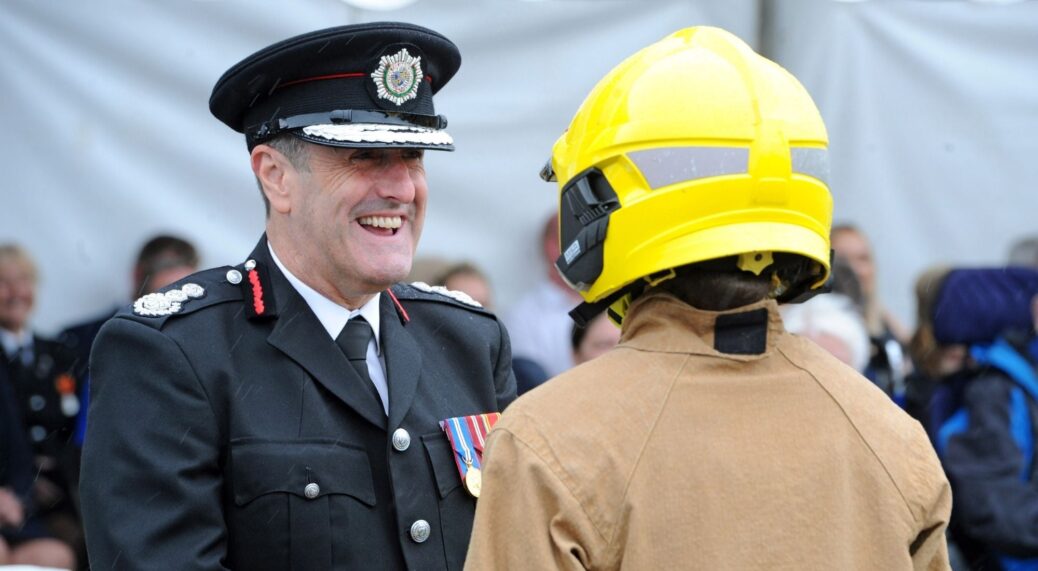 Mr Garrigan received an (Order of the British Empire) for his work with the service, which saw him dramatically reducing the numbers of people who have lost their lives through fires.

Phil, who now lives in Wirral having grown up in Maghull, (where he attended St George’s Primary School before going on to Maricourt High School) joined Merseyside Fire & Rescue Service in 1990 – working in some of Merseyside’s most vulnerable and deprived communities.  With this he brings a strong community focus to the Service, recognising the unique position of trust and respect in which the Fire & Rescue Service is held.

He has used this standing in the community alongside the professionalism of Merseyside FRS staff to tackle the real underlying factors which affect risk in Merseyside’s communities.

His vision, drive and ambition has seen Merseyside achieve the lowest ever number of fire deaths on record, and he has instilled a real sense of investment in the communities of Merseyside within his teams.

Mr Garrigan is also the National Lead for the Fire & Rescue Service with regard to its work with children and young people, transforming hundreds of lives across the UK through his leadership.

In 2013, he rebuilt the UK Fire Cadet movement, a national uniformed youth organisation delivered through all Fire & Rescue Services across the UK. Over 15,000 children are now Fire Cadets, with 1000 volunteers supporting them and an amazing 45,000 hours of positive social action under their belts. The young people involved have developed skills for life, learning and future employment, whilst acting as a positive force in their own communities.

He is a Trustee and member of the Board at both the Hive Youth Zone and the Torus Foundation as well as being an Ambassador for the Cash for Kids Charity.

The breadth of his work gives him an almost unique understanding of the sector.

After taking on the role of Chief Fire Officer in 2017 he bucked the trend of cuts to the Fire & Rescue Services nationally and found innovative ways to recruit new firefighters and increase the number of fire engines available, ensuring the continued safety of the people of Merseyside.

Working with the Home Office, unions and partner agencies, Phil’s drive and determination has led to national agreements enabling firefighters to drive ambulances, deliver Personal Protective Equipment to NHS and care staff and deliver prescriptions and food to vulnerable people; producing a lasting legacy for the future of Fire & Rescue Services and communities across the country.

In response to the awarding of this honour, Chief Fire Officer Garrigan said: “I am very humbled to receive this honour and recognise that it is in no small part down to the incredible people I work with, people who go out of their way every day to protect the public.

“Merseyside Fire & Rescue Service, the Fire Authority who have always given me their unfaltering support and all those who are part of this great organisation, have helped us develop a national and international reputation – a reputation for making a real difference in the lives of those people we have the privilege to serve.

“Nowhere is this more evident than in our response to the pandemic, which has shown that we understand our place at the heart of our communities.

“We are a Service that genuinely cares and is unswerving in its commitment to tackle inequality in every aspect of our work. I don’t think you can ask for much more than that.

“And whilst the award of the OBE is a great personal achievement and one that I will cherish, it is the people I work with and what we have delivered together that I am most proud of. Nothing gets in our way.

“I am also incredibly grateful to my wife Michelle for allowing me the opportunities in work that many other people aren’t afforded. I know my own limitations and I know that they are offset by hard work, accessibility and unswerving commitment to the people of Merseyside, all of which can come at a cost unless you have someone so understanding as my wife by your side.”

Cllr Les Byrom, the Chair of the Fire Authority said: “The awarding of the OBE to our Chief Fire Officer is richly deserved and is testimony to his hard work and tenacity.

“His vision, innovation and unswerving commitment to Merseyside has seen the Authority re-invest in the frontline for the first time in many years and his courage both locally and nationally has seen Merseyside influence at the highest levels in Government, none more so than when leading the sector through the current pandemic.

“We are incredibly lucky to have someone with his integrity and compassion lead our Fire & Rescue Service. The Authority is thrilled by the announcement.”