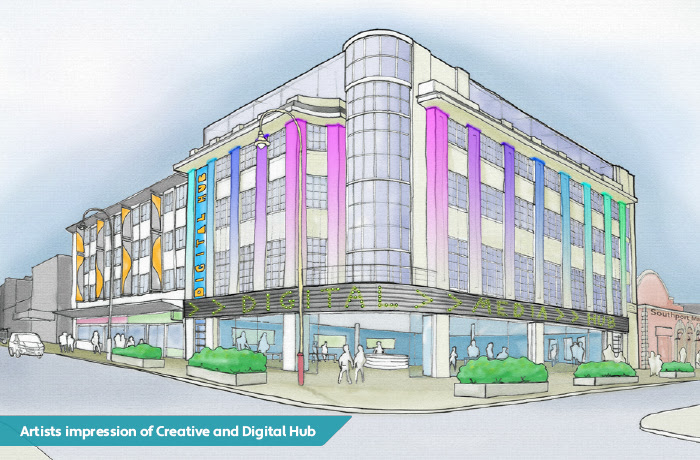 Southport MP Damien Moore has today urged the Government to provide greater investment for the North of England to help the region recover from the Covid-19 pandemic.

Mr Moore led a Westminster Hall Debate on Infrastructure Spending in the North of England this morning (Wednesday, 25th November 2020) as he called for a fairer share on funding for projects between the North and the South of the country.

He urged the Government to back proposals which will transform Southport, including the £50million Southport Town Deal plans which were submitted last month.

He also called for the reconnection by rail of Southport, Preston and Ormskirk, as well as the creation of thousands of new green economy jobs through the Peel Combined Freeport.

Damien Moore led the debate ahead of this afternoon’s statement by Chancellor of the Exchequer Rishi Sunak on Public Spending.

During his debate he told MPs: “We are currently in the midst of fighting a devastating pandemic. But the pandemic is not only a health crisis, but an economic one too.

“The North has seen a level of adversity and disruption unparalleled with other parts of the country. The result is that this has exposed for all our constituents the deep structural and systemic disadvantage they face. An area that has been exposed in the sharpest relief during this unprecedented turmoil is the level of infrastructure spending in the North.

“That distinct disadvantage was highlighted by the Institute for Fiscal Studies when they released shocking statistics in October. They calculated that spending on infrastructure was higher per person in London at £1,461 a year on average, over a five year period. In the North West this average was at £979, in the North East at £793 and in Yorkshire and the Humber at £744.

“Consistently higher investment has created an obvious divide between North and South.

“We have an urgent need to redress these inequalities and start to invest in infrastructure that will unlock the North’s potential.”

Last month the Southport Town Deal board, which includes Damien Moore, submitted proposals worth £50million which aim to revitalise Southport. They include exciting plans for a new ‘waterside events centre’ to transform the Southport Theatre site, an immersive lights show in the Marine Lake and the conversion of empty town centre buildings to provide start-up space for new businesses.

Mr Moore urged the Government to give its support to the Southport Town Deal, as well as reopening rail lines to provide direct links between Southport, Preston and Ormskirk.

He told MPs: “Southport is a jewel in the North’s crown attracting thousands of visitors each year to events like Southport Flower Show, Southport Air Show, Southport Comedy Festival and the Royal Birkdale Golf Open. In fact, one third of the local economy is in leisure and tourism highlighting the distinct, historical and unique advantage Southport has over other coastal towns.

“Improved spending on infrastructure would open up our economy to more opportunity and improve connectivity. Projects such as reopening the Burscough Curves, which would provide a direct line from Southport to Preston, would connect coastal towns to regional transport hubs, enabling more people to visit the famous Southport Pleasureland.

“Public infrastructure investment would also attract private investment – more businesses will learn how Southport is the best place in the country to do business – ultimately benefiting more than just one sector and spur greater, long-lasting growth.”

Urging the Government to back the Southport Town Deal, he said: “Our Town Deal which was submitted recently for £50million will unleash a further £350million to completely transform Southport, embracing our tourism industry and diversifying our economy, making it stronger and more resilient.

“The catalyst of the Town Deal has already seen private investment projects such as Southport Cove and the new Viking Attraction at Southport Pleasureland.

“With an emphasis to develop enterprise and innovation we hope to attract more companies such as Techedia, a specialist IT company, which has started a £1million transformation of a landmark building which will bring into that building 75 jobs.”

Damien Moore said thousands of high quality, highly paid jobs could also be provided through the Peel Combined Freeport project bid which would provide greater links between the United States, Canada and the Americas with Southport and Lancashire.

He said: “With these trading links we can develop and grow the areas of advanced manufacturing, energy, digital, biotech and agriculture. It cannot be underestimated how important investment in projects such as these is, if we are to overcome the economic challenge of Covid and realise the full potential of Brexit.

“These are but a few of the countless infrastructure projects in our great region.

“Improved infrastructure spending is a vital and core part of our recovery. Done correctly, it has the power to fulfil our commitment to people living in the North, build back better and level up opportunity.”