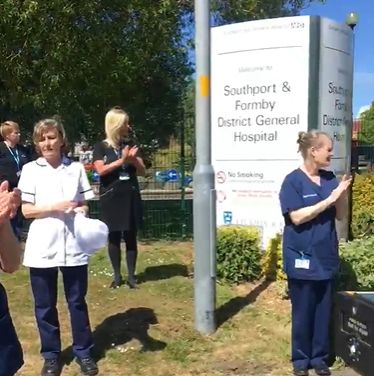 People across Southport will be asked to observe a minute’s silence at 11am on Tuesday to remember key workers who have lost their lives to coronavirus.

It comes after emotional scenes outside Southport Hospital on Monday, as a hearse carried the body of nurse Josephine Peter past Southport and Formby District General Hospital, where she died last weekend.

Her colleagues stood two meters apart from each other outside the hospital on Town Lane as she showed their respects to Josephine.

‘Manini’ leaves behind her husband, Thabo Peter, her two children, Bongani and Buhle, a granddaughter, five sisters and one brother.

There has now been a total of 105 confirmed deaths of patients with Covid-19 at Southport Hospital and Ormskirk Hospital, while many others in our town are expected to have lost their lives to the disease at home, in care homes, and in other settings.

On Tuesday, from 11am, people will have the chance to fall silent and pay their respects.

At least 90 NHS staff have died since 25 March, as have many care and transport workers.

“We will be asking everybody who works in the government to take part and we would hope that others will take part nationwide as well,” the spokesman said.

The minute’s silence is timed to coincide with International Workers’ Memorial Day.

A spokesman for Sefton Police said: “Officers and staff will be joining our colleagues from the NHS and other front-line services in a minute’s silence on Tuesday at 11 o’clock, to remember those who have lost their lives to Covid-19.”

A Sefton Council spokesman said: “We are inviting all colleagues and people across the Borough to take part in a minute’s silence at 11am today to mark International Workers’ Memorial Day and honour key workers who have died during the Coronavirus outbreak.”

Dame Donna Kinnair, chief executive and general secretary of the Royal College of Nursing, said the”moment “will bring together a sombre but grateful nation.”

Dame Donna said: “Whether in nursing or driving buses, our heroes kept going to work when many had the luxury of staying at home. Nobody should go out to work and risk their life. This must not be the last time that sacrifice is recognised. The country and its leaders owe a tremendous debt to these key workers and the many more who are on shift again today.”

DO you have a story for Stand Up For Southport? Please message via via Facebook or email Andrew Brown at: mediaandrewbrown@gmail.com