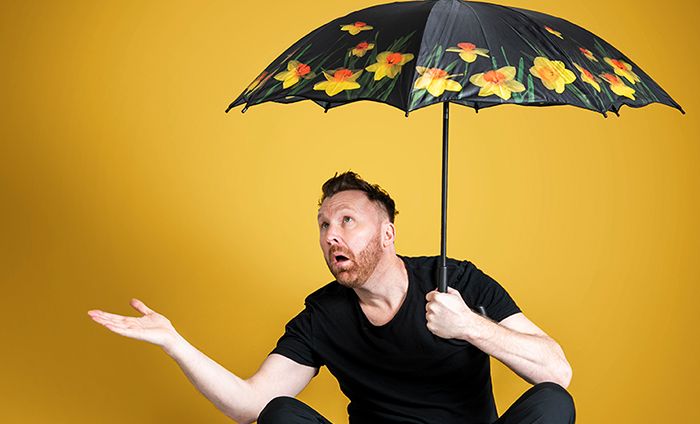 Jason Byrne is fizzing with excitement as he prepares to return to Southport Comedy Festival this October, with his brand-new stand-up comedy show ‘Audience Precipitation’.

Jason has become a firm Festival favourite with a series of sell-out shows in Southport over the past few years.

He was very much missed when last year’s Southport Comedy Festival was postponed due to a  covid lockdown.

The good news is that fans can now see the Festival’s comedy king on his return to Southport on Thursday, 7th October, with tickets available via the Southport Festival website: southportcomedyfestival.com

Jason will perform his new show at Victoria Park in Southport on that date as part of his 28 date UK tour.

Though disappointed to have to put on hold his 25th year of consecutive touring and delay the anniversary celebrations last year, Jason is more ready than ever to shower the UK in his popular and much-loved mayhem.

Audience Precipitation is a brand-new fun, happy and joyful show from ‘the outright king of live comedy’ (The Times).

The tour opened at Edinburgh’s MultiStory on 11th August for a four date run, is heading to the 10th anniversary Southport Comedy Festival and Victoria Park in Southport on 7th October and will culminate in Dunfermline on 26th November.

Jason Byrne has learnt over the past few years that we all need to ‘play’ a bit more in our lives. With this in mind, Jason will do what he does best: connect with his audience in a way that no other comic can.

Expect the Irish funnyman to invite – or drag, as it has been known in the past – people up onto the stage and make a ‘holy show of them’, as they’d say in Ireland.

Jason’s Audience Precipitation tour will be a laugh-out-loud, must-see show with a light drizzle of audience participation… ooohhh, clever that.

“The outright king of live comedy” – The Times