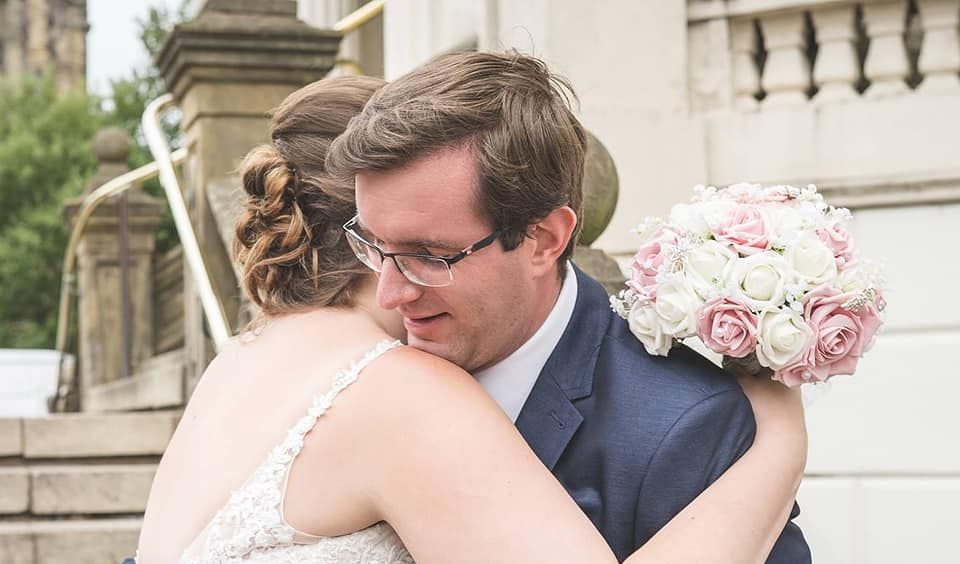 This picture from a wedding in Southport says a thousand words.

It paints a picture of the incredible love between university lecturer Michael Walton and his beloved sister Stephanie Russell, on Stephanie’s wedding day in Southport.

It was taken on 17 August, 2018, just four weeks before rare brain tumour surgery on Michael at the Walton neurological hospital in Liverpool.

The condition has left Michael, aged 30, unable to breathe by himself, close his eyes or speak.

After spending more than 500 days and nights in Walton Hospital, Stephanie and her parents are now desperately trying to bring Michael back home.

She has set up a special page on Instagram telling the story called Michael’s Journey To Home.

She has also set up a JustGiving page, with today the final chance to donate, as the family hopes to raise £12,000 through their appeal.

The money will be used on special technology to help Michael to speak again, as well as making vital adaptations needed to bring him home.

Stephanie said: “This picture shows my brother four weeks before his rare brain tumour operation and then another picture just four days ago with myself.

“Today is the last day to donate to our Just Giving page.

“I am so grateful, as is Michael and our family, for all your generosity, care and positivity.

“If you can share, even donate a few pounds it would mean the world.

“I know lots of you are invested into our journey now, and I’ve spoken to so many lovely people, businesses and friends!

“Thank you all so much.”

Stephanie was delighted that her initial campaign to raise £4,000 to help purchase a special eye-gaze system to help give Michael a way to speak has proved successful.

Now their parents, Roger and Margaret, have sold their house so they can buy a new home which they are busy adapting to suit Michael’s needs.

Stephanie said: “Michael is my older brother and just 30 years old, born in Southport, lived in Banks and worked as a lecturer at Manchester Metropolitan University. He was weeks away from finishing his PhD when he was diagnosed with a rare brain tumour.

“He is the most intelligent person I’ve ever met, I’ve never seen anyone work so hard to something he loved – Psychology.

“This has had a devastating effect on Michael’s life, and he has been left not even able to breathe by himself.

“We have spent 503 days in the Walton Centre intensive care, and now at a local Intensive care unit closer to home.

“If I was honest with myself, it’s broken me and my family. We’ve watched as were told there is nothing more we can do, we’ve watched his daily frustrations of not being able to communicate, and have a basic quality of life,

“We are now working hard to raise money to bring Michael finally home where he belongs. My parents ( Roger, the much loved Caretaker of Our Lady of Lourdes Primary School in Southport for 13 years upto 2009) and Margaret have sold their house, moved to a more suitable property and are working so hard to adapt and renovate this for Michael.

“If anyone can spare a few pounds towards bringing Michael home it would be so gratefully appreciated. Everyone deserves a quality of life, even more when your life is so different to what it was before.”