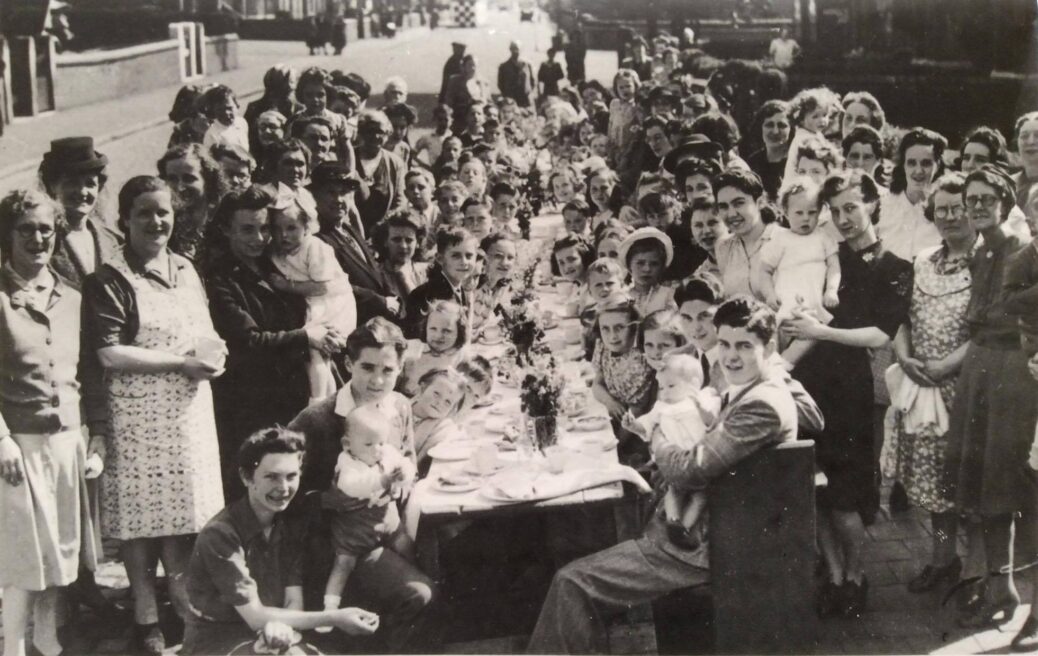 What are you eating at your VE Day Stay At Home Street Party today?

This Friday bank holiday marks 75 years since Britain and the Allies defeated Hitler’s Germany towards the end of the Second World War. The conflict would continue until the defeat of Japan in August that year.

But as we recreate the VE Day celebrations of 1945, and make food reminiscent of back then, what were they really eating at the time?

One person who remembers is Graham Bridge, who was nine years old when he was among families enjoying a street party on Warren Road in Southport on the 8th of May, 1945.

He said: “I thought about the food that we had at the Street Party.

“Sandwiches would have probably been egg. Many people had their own veg patch and hens for eggs and to eat when they became egg bound, or stopped laying. Or dried egg powder, cheese – on ration!  – tinned beef from Argentina, home made bread and small cakes with a drink of Council  Pop! (tap water).

“We probably had an apple, an orange or a banana, if any had made it into Preston Docks, and whatever anyone else could get their hands on!”

He said: “My Dad’s name was Ron Bridge. We lived in Grantham Road in Birkdale, where I was born, in May 1936.  He was employed at Townsend Brothers Builders Merchants and produced a range of tiled fireplaces.

“Dad was called up into the RAF in 1939 and was posted over to Northern Ireland as a Barrage Balloon Winch Operator. He came home again at the end of the war in 1946. He never did elaborate on his postings in between In the RAF. He returned to Townsend Brothers as a goods driver.” Graham Bridge remembers the street party 75 years ago as a time of great celebration.

He said: “As kids we were astonished and amazed that we were having a street party with sandwiches, cakes and drinks, as this was the time that we were still in Wartime Rationing and everything was bought on coupons.

“Our mothers had to get together and plan these parties as our Dads were still away in the Armed Forces. Some would not return.

“Tables, chairs and bedsheets plus Union Jack flags and home-made bunting appeared from every house that still had them, and we celebrated the end of the War in Europe.

“Bomb shelters were still dotted every 200 yards along the roadway and afterwards these were then made into great Local Kids Club Shelters.

“Street lamps slowly began to be lit at night again and blackout curtains were torn down, hopefully never to be used again.

“We were allowed to go without our gas masks slung on our shoulders and we looked forward to the end of rationing. Unfortunately this had to go on for some time until the ships bringing in the supplies were allowed free passage into our bomb damaged major ports.

“Christmas presents during the war had been very sparsely available; we were very thankful to get an orange or a banana or a passed-down toy car.

“We made go-carts using old pram wheels and pieces of wood and raced against other street gangs to become the best team in the area!

“I was wearing pass-me-downs and patched clothing!

“These were the times of nobody owning a car in our street and having a telephone in the house was unheard of.

“But because our Dads and Mums together had beaten the Germans we were proud to be British. Churchill was our hero.”

This Friday, on the 75th anniversary of VE Day, people are being urged to get out your red, white and blue, and celebrate in style despite the coronavirus lockdown:

11am – why not join in two minutes silence on your doorstep

3pm – Winston Churchill’s iconic speech will be aired on the BBC. Then grab your picnic blankets, or garden table, and head into your front, or back garden.

4pm – Enjoy tea and scones, or coffee and cake

6pm – Enjoy dinner and raise a glass to your neighbours

Please remember to respect the social distancing rules at all times.