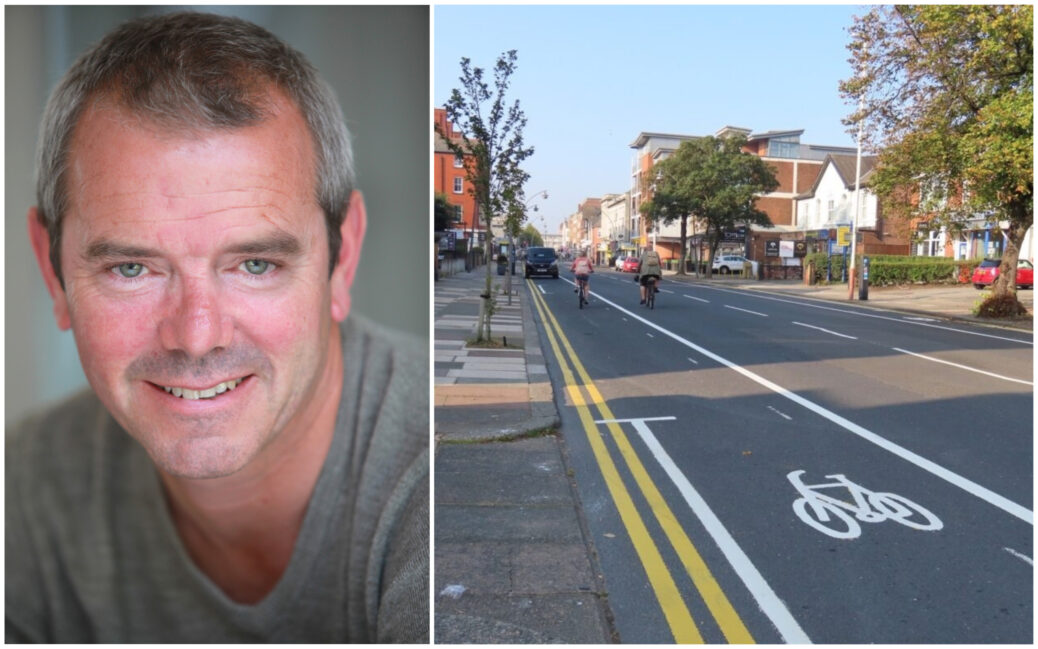 The pop up cycle lanes in Southport are the most used in the Liverpool City Region, with local cycling champion and TV presenter Simon O’Brien saying they give a huge boost to local businesses.

The lanes were installed on Queens Road, Hoghton Street, Chapel Street, Tulketh Street, Wesley Street and Portland Street on August 21 last year for a six month trial basis to encourage walking and cycling during the pandemic.

The six month  ‘Southport Emergency Active Travel Route’  trial is due to expire this month, with a verdict due imminently on whether or not to make it permanent.

Southport and Bootle were among areas across the Liverpool City Region which saw 23km of new pop-up cycle lanes and expanded footpaths installed last Summer.

Liverpool City Region Cycling & Walking Commissioner Simon O’Brien, who played Damon Grant in Brookside in the 1980s before presenting shows such as Find it, Fix It, Flog it and The Great House Giveaway, says encouraging more cycling for short journeys will free up parking spaces for others.

He said: “Southport could be heading for parking chaos. Nearly 200 town centre parking spaces may be lost to current motorists!

“Let’s break that figure down. That is 392 journeys per day in the middle of winter.

“It’s fair to assume that the vast majority of those are two journeys made by individual cyclists riding to and from the town centre. So that’s 196 commutes or shopping trips by bike along the lane every day.”

The pop up cycle lanes have been very unpopular with many local residents and businesses.

Sinclair Hesketh D’Alburquerque, owner of Rueters bar and grill on Hoghton Street, said: “This was done with no consultation with local businesses or residents and no thoughts for disabled visitors who are rightly angered by this move.

Businesses, who have already been severely hit by the COVID lockdown can ill afford the significant losses that the removal of on street parking has done, and will undoubtedly have to close permanently should the cycle lanes remain in place.”

He said: “There is a lobby to get rid of the lane and thus discourage people from using a bike to get into Southport. I read with interest the reasons for wanting to scrap the lane:

‘No one uses the lanes’

“The figures from the roadside monitors do not support that statement. Bike lanes are a very efficient way of moving people and so they can create an illusion of being relatively empty. Nearly 30,000 journeys over two winter months. Wow. They are the best figures for any ‘pop up’ lane across the region. Something for Southport to shout about and build on. 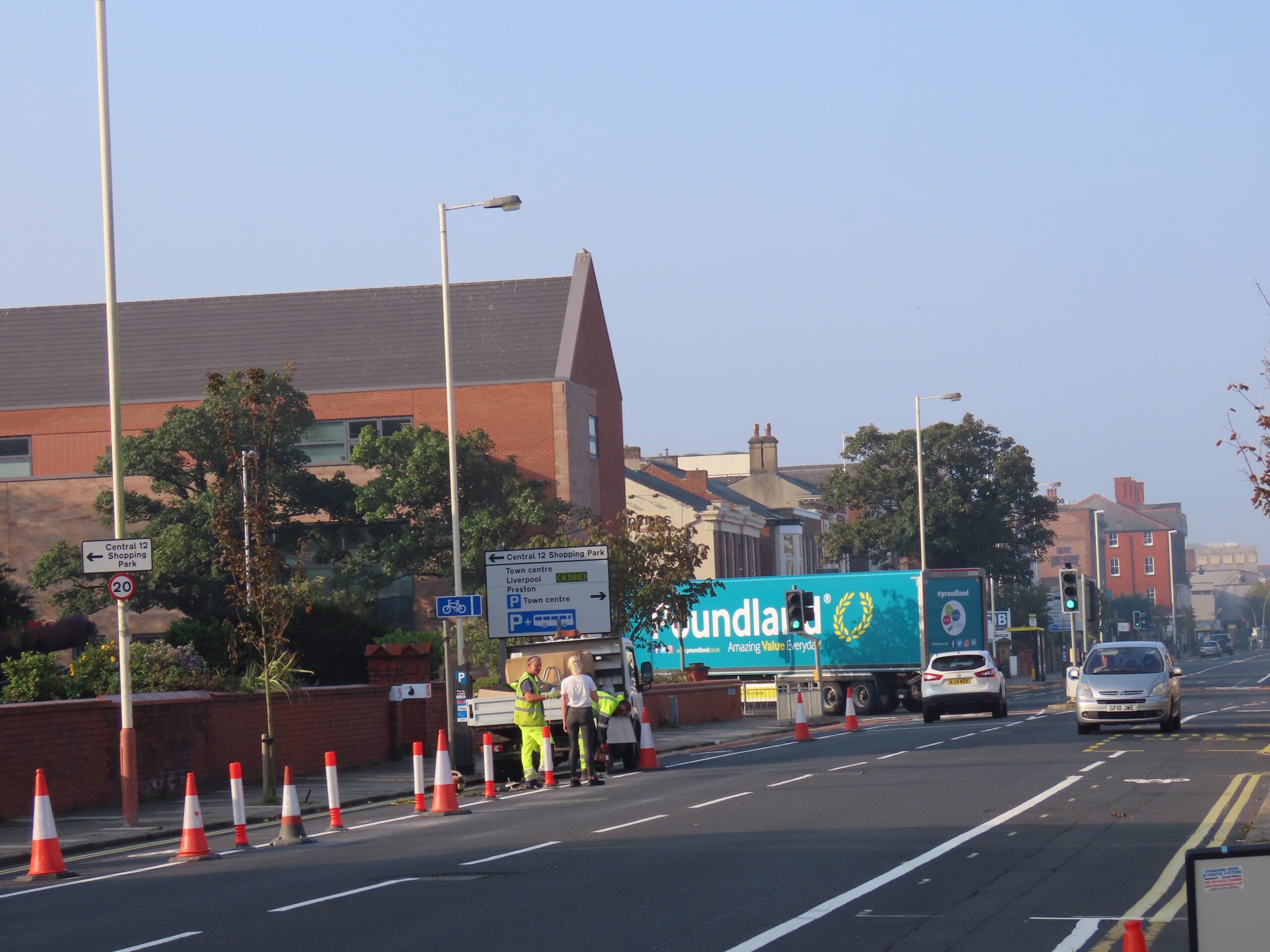 Work is taking place to create new pop up cycle lanes on roads including Hoghton Street and Queens Road in Southport. Photo by Andrew Brown Media

‘Parking in Southport is already an issue. We need cheaper parking, or parking concessions, and we need more parking spaces to be made available, not less.’

“What if those people cycling in every day decided, for their own personal safety, to drive instead? That’s 196 more cars trying to park in a town centre already struggling for parking spaces.

“A majority of people throughout the region say they would cycle more if they felt safer on the roads. Proper cycle lanes (not just painted lines) would encourage more people out of their cars and onto their bikes freeing up more parking for those that need it, the elderly, blue badges, business deliveries and longer distance commuters.

“Our town centres are facing unprecedented pressure. The explosion in online shopping and food deliveries looks set to continue. So Southport needs to adapt.

“This lovely town has always been a destination for short term visitors and it needs to build on this ethos.

“The tourist industry is vital to the local economy, but this like any other, is a very competitive market. People want to visit places where they and their children can wander freely and safely away from busy polluted roads.

“It is well documented that when places feel pleasant, safe and quiet, people loiter and spend more. ‘Green tourism’ is a rapidly growing sector and those people who chose to travel in this way are very discerning. They know exactly what they want to spend their money on and where they want to spend it.

“Change is often difficult but there are huge issues facing us all and change is needed. The Climate Crisis, air quality issues, an obesity epidemic. Depressing stuff but they can all be tackled by acting positively now.

“I believe that Southport has the heritage and location to be one of the best places to live, visit, stay and shop in the country but only if it keeps pace with the rapidly changing world. It is not enough to say ‘we want bike lanes but just not here’.

“Solve the parking issues by giving people a safe, direct alternative for shorter trips without the car.

“Now is the time to embrace the amazing success of the first ‘pop up’ lane and join the chorus for more.

“Consider again those monitor figures from Chapel Street – 28,976 trips and counting in just two winter months! The evidence is clear. Provide decent bike lanes and they will be used.”