Rikki Spofforth, a paralegal at Fletchers Solicitors, will walk from Southport to Leicester in loving memory of his grandfather, Ken who he sadly lost to cancer in 2015.

The 33-year-old has since been inspired to undertake the journey, expected to take him six days after just missing out on being with his grandfather during his final hours.

Rikki said: “The story behind it basically boils down to my grandfather having cancer. We knew he was nearing the end of his life, and we then received a telephone call to advise he had gone into the hospice in Leicester.

“It looked as though he did not have long, so we needed to get down there ASAP to say our last goodbyes.

“So, myself, my mother and my sister got into the car and drove down to Leicester. Unfortunately, there were numerous traffic delays and by the time we arrived at LOROS, he had passed away.”

Grandfather Ken, 71 had been a resident at LOROS (Leicester Hospice) for less than 72 hours before a carer called Rikki’s family to prepare them for the news Ken’s time was coming to an end.

Rikki has always found the hospice to be incredibly accommodating to his family’s needs and wishes and now intends to include LOROS in his fundraising sights along with two other charities: Queenscourt Hospice, Southport’s own Hospice, and Cancer Research UK. 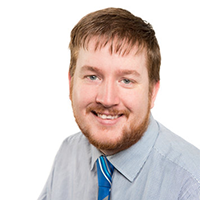 The Fletchers Solicitors Litigation Executive also believes the final moments shared with his grandfather were taken away by traffic, which is part of the reason he now wishes to undertake the journey once again, this time on foot.

Rikki said: “I have absolutely not done anything like this before. At university, I had done a couple of 10k runs, but that was a good few years ago now. In fact, more than a few years. Closer to twelve.”

For most of the walk, Rikki will be going it alone in memory of Ken. However, on the final day, Rikki is set to be joined by a distant relative who resides in Loughborough, just outside Leicester.

Rikki said: “I wanted to do the journey as the idea of doing the journey again has meaning behind it. I also can’t cycle, so my only choice, really, was to do it on foot as I can’t drive. Not only that, if it was a straight choice between a bike and walking, I’d prefer to walk.”

Rikki plans to tackle the 120-mile journey on Monday August 30th starting from Birkdale. He has estimated the route will take him around six day, and as of May this year the legal professional is already halfway to reaching his £500 fundraising target. Aiming to finish Saturday 4th September at LOROS, Leicester.

You can read more about Rikki’s fundraising and donate here:

Rikki said: “Any donation you could give would be amazing, and I thank you for your support. It’s not going to be easy for this fat lad to walk so far, but with your tremendous support I’m sure to make it!”