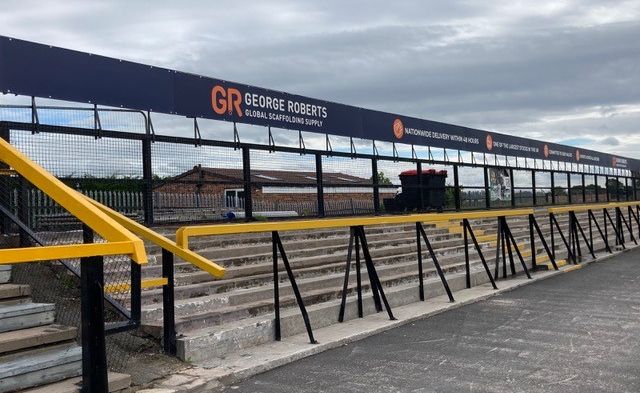 A Club spokesperson said: “As one of the UK’s leading independent suppliers of scaffolding, George Roberts Limited has gained a strong and trusted reputation in the industry since being founded in 1992, with health and safety being at the core of everything it does.

“From its Liverpool head office, it supplies a wide range of both traditional scaffolding and access equipment, system scaffolds, plus other light access products such as aluminium towers, lightweight stagings and general builders’ plant too.

“Over the past 30 years and with over 80 direct employees today, the company has grown to become a household name in not just the UK industry, but is increasingly active and well known for its quality of service around the world too, having completed large projects in the USA and Africa in recent years.”

George Roberts Limited Chairman, George Roberts said: “I have followed Southport FC for many years. Meeting Manager Liam Watson and Head of Commercial & Operations Steve Dewsnip recently highlighted how close and family-friendly the club has become and I am really looking forward to bringing my grandchildren to some of the games this season.

“I am delighted to be involved and wish the players all the best for the coming season.”

Steve Dewsnip, Southport FC’s Head of Commercial & Operations said: “This is another great partnership to establish for the football club and we are grateful to George and his company for their valuable support.

“I know George is a big football fan and we are looking forward to seeing him, his family and colleagues at Haig Avenue over the next few years.”