Maghull MTC have returned to the Southport Little Theatre this week with their summer musical.

This year they have chosen classic toe tapper, Guys and Dolls. It is the society’s 50th anniversary show and it does not disappoint.

This musical was originally staged in 1950 and was based on short stories written in the 1930s by Damon Runyan about the unlikely romance between a missionary girl and a gambler.

The gambler, Sky Masterson runs into missionary leader Sgt Sarah Brown when he is passing through New York City. His nickname is Sky because he bets so high. Local dice game maestro, Nathan Detroit, needs to win big to be able to secure a venue for his floating crap game, whilst dodging Lieutenant Brannigan and appeasing Miss Adelaide. Miss Adelaide is a singer at the Hot Box, and they have been engaged for 14 years, much to her chagrin! Nathan bets Sky he cannot take missionary leader and saviour of sinners, Sarah Brown, out to dinner. She isn’t an easy doll to charm, but he is undeterred and tries to find a way they can both benefit. Will a deal become a date?

Many will be familiar with the 1955 film version starring Marlon Brando as Sky, Jean Simmons as Sarah, Frank Sinatra as Nathan and Vivien Blaine (the stage original) as Miss Adelaide.

Miss Adelaide and the Hotbox Girls in Guys and Dolls. Photo by Acceber Pictures

Even if you have not seen the show before, you are sure to be familiar with the songs such as Luck Be A Lady, If I Were A Bell, I’ve Never Been In Love Before, Sit Down You’re Rockin’ The Boat and of course the titular number Guys and Dolls.

Maghull MTC have ensured the show will go on by having understudies for many main roles, and these performers will take the roles at the matinee. The Guys and Dolls of the company all bring energy and passion and it is clear they are a real team and have had great guidance and support to nurture their talents. There are harmonies, and synchronicity; tableaus, dance numbers and even fisticuffs.

Liam Rabbette is excellent as wise cracking Nathan Detroit, bringing wit, physical comedy and charm to the role. The chemistry between him and Phoebe Hill’s marvellous Miss Adelaide is captivating and the audience were rooting for them. Their characters were consistent; no mean feat for Phoebe who impressively maintained the New Yoik accent as well as the perennial cold caused by her never ending betrothal. Miss Adelaide will be played by another MMTC favourite, Sarah Fletcher, at the matinee. For the rest of the run she glows as one of the Hotbox girls. 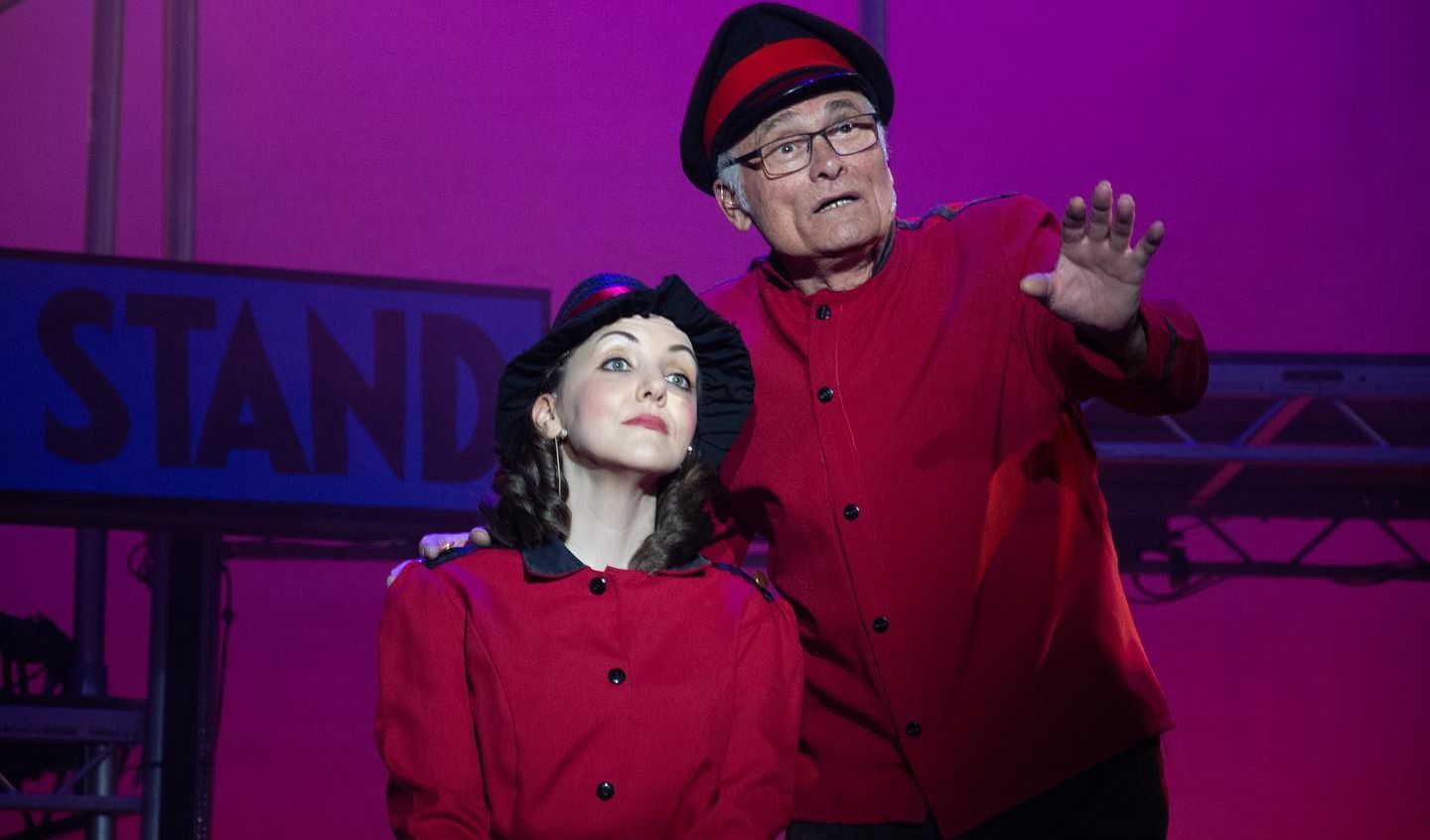 Sarah and Arvide in Guys and Dolls. Photo by Acceber Pictures

Leslie Longley was a triumph as Sky Masterson, mastering his role and commanding the stage. Sky has to have bravado and a soft side too, and these came across beautifully. The role will be

portrayed by Matt Casson on Saturday afternoon – it will be a real contrast with his brilliant turn the rest of the run as dapper but dim Benny Southstreet. Benny’s numbers are largely with Nicely Nicely Johnson, played by comic actor and all round good guy Eric Fletcher. Along with more-than-able Alex McKillop as Harry the Horse, they opened the show and set the standard (sky) high! Eric will swap with Colin Kilbride on Thursday evening and give him the chance to get out from behind the bottle in his alternate role as Brandy Bottle Bates.

In the role of Sarah Brown is accomplished singer Rachel Standring. Sarah is another character who goes on a journey and it was lovely to watch the shift from her spirited self in New York to her imbibing spirits self in Havana. The understudy for this role is Kay Davies, another gorgeous

performer who is well known to MMTC audiences and who is sure to do a stellar job.

Rounding out this impressive cast are several actors making their mark in smaller roles: Alice

The other crapshooters, Hotbox girls and mission band members all brought excellent

characterisation and really made the show. All the numbers had energy and panache and looked fantastic too.

allowed the performers to shine in their fabulous costumes.

Suzanne Morris on bringing this classic to life in such a way that it felt both familiar and fresh. Well done also to the many behind the scenes smoothly operating lights and sound as well as keeping patrons safe and supping.