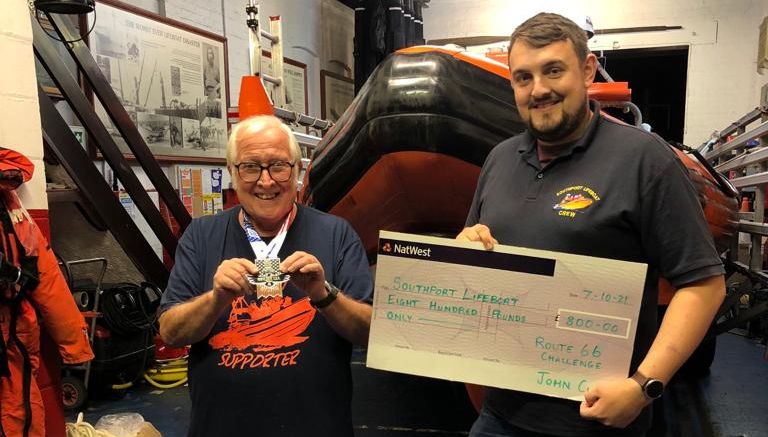 Southport ‘Marathon Man’ John Curd recently visited the Southport Lifeboat house, having raised £800 for the charity by running and cycling thousands of miles.

John, who is aged 76 and lives in Marshside, ran and cycled 2,280 miles, the equivalent length of US Route 66.

He completed the challenge in aid of the Southport Offshore Rescue Trust, the independent charity that runs the Southport Lifeboat.

John started the challenge in January, finishing it in the middle of June. He ran the overwhelming majority of the distance.

John said: “In total I have now completed 120 full marathons and 235 half marathons, 35 of which were Great North Runs.

“I have also taken part in literally dozens of virtual runs or challenges over the past 18 months, including the 509 miles Camino de Santiago Virtual Challenge. Sadly, most of the organised running events had to be cancelled or postponed.

“I’ve helped raise money for many charities close to my heart, both local and national, including Queenscourt Hospice, Alder Hey, Prostate Cancer UK and MIND. John has previously raised funds for the Southport Lifeboat in 2015, when he ran in his 30th Great North Run in aid of the charity.”

John was invited to visit the Lifeboat Station to meet the volunteer crew at training last month.

He said: “I wasn’t aware as to how much work and expertise went into protecting people on our coastline 24 hours a day 7 days a week.

“Running and cycling 2,280 miles over the course of just a few months was very challenging given that I’m almost 77 years of age. It was particularly tough when the weather was more inclement in January.

“However, visiting the Lifeboat Station has made me realise that it was all worth it. They are a completely independent lifeboat organisation, and they rely almost entirely on charitable fundraising.”

Nick Porter, Coxswain of the Southport Lifeboat said: “It is remarkable the number of charities that John has helped over the years by taking part in these challenges, and we are grateful that he chose to support us once again.

“It was a pleasure to invite John to the current boathouse and show him first-hand how the money he has raised will make a difference for us. It will mostly be used to furnish our new station which is due to open later in the year, and provide a better working environment for our volunteers.”

Since completing the Route 66 virtual challenge, John has completed his 36th Great North Run in Newcastle in aid of Macmillan Cancer Support and last month he took part in the Virtual London Marathon, raising hundreds of Pounds for Pancreatic Cancer UK.