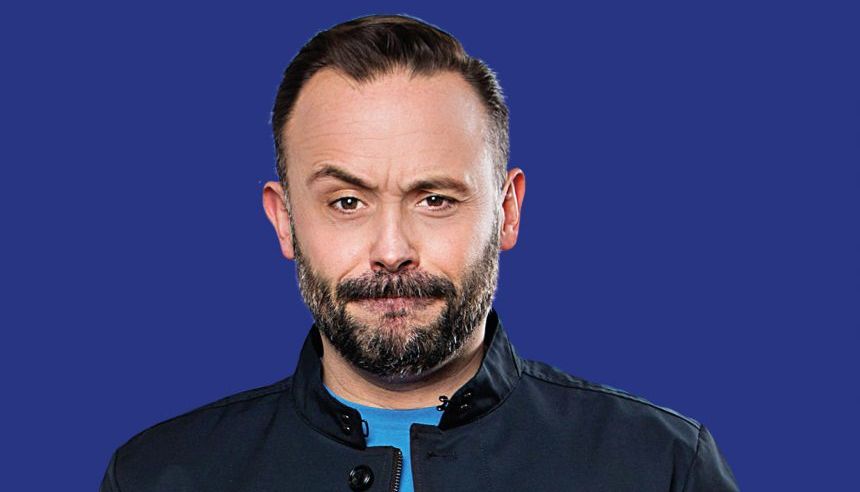 Geoff Norcott is back! And he is enjoying every minute.

The comedian is back on our screens with The Mash Report, after the Dave channel gave it a new home after it was publicly cancelled by the BBC in March.

He is also excited to be returning to Southport Comedy Festival, sponsored by Anthony James Estate Agents, with his brand new tour – I Blame the Parents

I Blame the Parents is the fourth national tour for Geoff Norcott, following on the back of ‘Conswervative’, ‘Traditionalism’ and ‘Taking Liberties’.

The conservative comedian stars on the Mash Report alongside Nish Kumar, Rachel Parris, Ellie Taylor and Steve N Allen, and argues that the satirical comedy show is one of the few shows to take on the ‘woke orthodoxy’.

He said: “It is a really good feeling to be back on the show!

“It is a really good mix of comedians. Nish Kumar and I work really well together. His comedy is very edgy, while I am about as edgy as James Blunt eating a lemon and herb Nando’s.

“We have a lot of fun on the show. There is something good about two people sitting down and having a laugh.”

He is not a fan of comedy shows and comedians being cancelled, or of the current climate of ‘cancel culture’.

Geoff Norcott was keen to point out that he is not a fan of Chubby Brown’s act and would not want to watch the show himself, but believes that audiences should have a choice.

He said: “Roy Chubby Brown’s brand of comedy is definitely not something that I identify with.

“However, I do not understand how these decision makers can have the power to sit and decide whether a comedian is or is not suitable for people in their area to listen to.

“All the things facing us at the moment – Covid, shortages, gas prices – and in Sheffield, they are sitting deciding whether people in their area should be allowed to listen to a certain comedian or not.

“Can you imagine looking at the minutes of that meeting? Looking at whether they like Roy Chubby Brown’s comedy or not?

“It is not a situation that I am very comfortable with.

“I am not a fan of his comedy at all. But surely people have a right to choose who they listen to.

“I would make a similar argument for a very left wing comedian who was out there pushing their envelope with their performance.

“Cancel culture has gone too far.”

At the moment Geoff is enjoying being back on the road, back performing live stand-up comedy.

Audiences are enjoying being back at live comedy gigs and comedy festivals too.

“There has been a lot of enthusiasm from people to see live comedy coming back.,” he said.

“With a lot of people, you can tell it’s their first big night out for months, and they have really enjoyed themselves.

“I am kind of surfing the wave of that!

“The buzz of being around people and audiences again is great.

“The enthusiasm and the reaction around the room is fantastic.

“It is really good to be back at Southport Comedy Festival.

“I went up to do a show in Southport during my last tour. It was a great crowd! I am looking forward to coming back.

“I am trying to be less politically partisan.

“I will be talking about parenting, politics, social commentary, and things which I find absurd.”

As a rare right-winger, Geoff Norcott is a unique voice in British comedy. Having appeared on Live at the Apollo, Mash Report, Mock the Week and Question Time he’s built up a significant live following with sell-out Edinburgh runs and two national tours. Operating outside the usual comedic commentary on politics and social issues, Geoff has carved a real niche for himself. With a documentary, bespoke TV formats plus a UK and international tour on the horizon, 2019 is set to be an even bigger year.

In I Blame the Parents, Geoff talks less politics (alright, there will probably be a bit), but this brand-new show will mostly explore personal responsibility, parenting and who should take the blame when things go wrong.

‘Sets himself apart from the liberal commentariat with a sharp self-knowing wit ****’ Dominic Maxwell, The Times

This is the final week of the 2021 Southport Comedy Festival. Geoff Norcott will be followed by:

Book your tickets at: www.southportcomedyfestival.com

Courtesy of Elite Marquees this year’s festival will be staged in a giant luxury marquee in Victoria Park, home of the world-renowned Southport Flower Show. The event is sponsored by Anthony James Estate Agents.