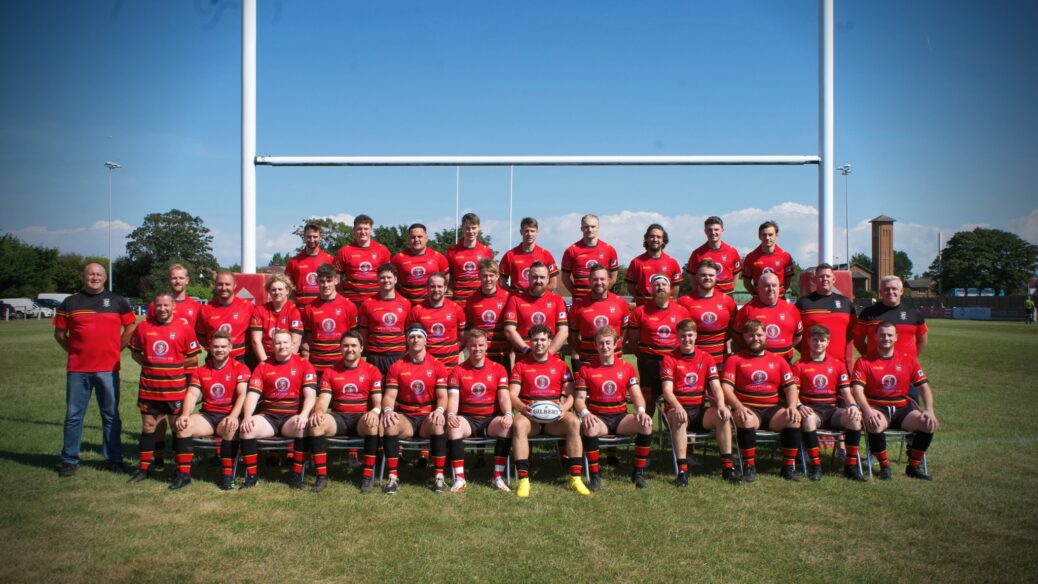 It was another glorious day at Waterloo Road with the sun shining and a bumper crowd witnessing an afternoon of high class rugby by Southport Rugby Club.

It was Sponsors’ Day and they were treated to an exciting match which was on a cliff edge the whole afternoon.

The club also welcomed Daniel Hayes, the author of the Town Game, a book which details the formative years of Southport Rugby Football Club.  Dan gave an informative talk before the match and his book is available for sale over the bar.

Leigh were the visitors to Waterloo Road but the curtain raiser was a match between Southport Shipwrecks and the Morpeth Marauders and what a match it was with the visitors running out winners by 30 points.  The Marauders were in high spirits throughout the afternoon and created a colourful spectacle in their fancy dress as the day wore on.

There were only two changes to the home team line-up with Lewis Caldwell replacing his brother Jordan and Cameron Williams coming in for the unavailable Ewan Thompson.

The visitors kicked off to the clubhouse end and after infringements from both teams Southport eventually got on top dominated possession and were duly rewarded with a penalty with Leigh being offside directly in front of the posts.  Jake Mann kicked truly and Southport were off and running 3 – 0.

The restart led to a spell of possession to the visitors but the home team were tackling strongly with Callum “Toots” Tootle leading the way for the forwards and James “Forrest” Bailey for the backs.

Leigh were unsuccessful with a penalty and Southport then enjoyed a spell of possession and showed good forward craft to move the ball down the field.  For next 20 minutes both teams struggled to gain control however Southport were the much more adventurous, spinning the ball from side to side to try and break down the resolute Leigh defence.

It was off the back of a dropped pass by the home team that the visitors managed to capitalise and score a break away try under the posts.  The conversion made it 3 – 7 to the visitors.

Southport RFC answered this score very quickly and their fitness was starting to tell as they moved the ball via rolling mauls and pick and gos around the base of the rucks.

Eventually the visitors were worn down and Jake Mann punched a hole through the defence and scored a well deserved try.  At half time the scores were marginally in Southport’s favour 10 – 7.

Following the restart and a heavy clash, Cameron Williams, who was playing well came off and shortly thereafter Ollie Ball also suffered a knock and was replaced.  This seemed to unsettle the home team and after some good forward work Leigh scored close to the post and converted the try to lead 14 -10.  The restart led to Southport controlling the ball and with Toots again running strongly but also showing some deft skills as he laid off a lovely inside ball managing to release Forrest who beat two tackles before slipping the ball to Ben Henderson for his first senior try.  Southport were back in front 15 – 14.

Both teams showed fighting spirit and it was end to end stuff and finally with only a couple of minutes of normal time remaining Leigh were awarded a penalty which ex Southport player Alex Leadbetter kicked and it was the visitors ahead 15 – 17.  The attritional nature of the game and the warm conditions meant there was a significant amount of injury time, more than enough for Southport to come back.  The home team were dominating possession and territory and threatening the Leigh try line.  They were held up over the line on one occasion but not to be deterred they came back again and scored under the posts with Ollie Mutch emerging with the ball, the hero.  Jake Mann conversion gave the home team a 5 point cushion but there was still time remaining for Leigh.  The restart saw them challenge the Southport defence but Callum Monaghan managed to strip the ball in a tackle and kick to touch and Southport ran out 22 – 17 winners.

What fantastic entertainment for the large crowd and great to see the home team triumphant and win the Alan Havard Cup.

Callum Tootle was deservedly the “Bar N’Ista” man of the match with his ferocious tackling and strong running.

James Forrest Bailey and James Cook have developed a good centre partnership and worked well in attack and defence.  Huge credit must also go to all of the forwards as they worked hard all day in very warm conditions. 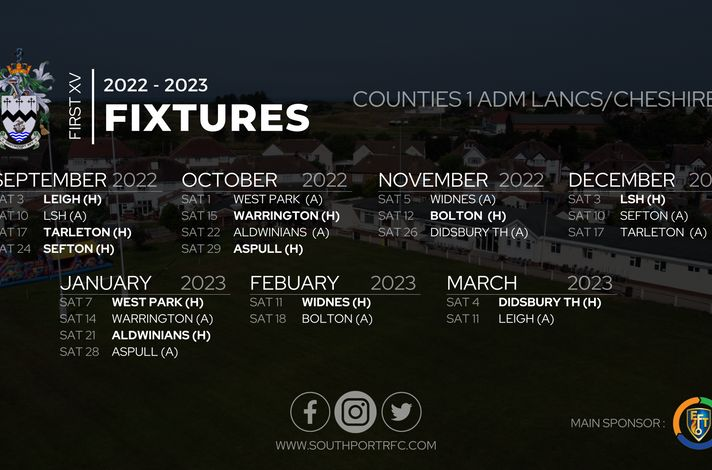 The second team were away to Leigh and fought valiantly but eventually lost out to Leigh 38 – 21.

Southport senior colts started their new season away to Collegiate our near neighbours in Liverpool.  A steady opening 10 minutes saw both sides evenly matched before Southport broke the deadlock.  A superbly judged cross field kick by Jamie Brown bounced into the arms of the chasing winger, Ethan Palmer, who plunged over in the corner unfortunately the tough conversion was unsuccessful.

On 20 minutes, Lewis Fusco went on a mazy run, beating several defenders and scored a great unconverted try.  Southport then lost their discipline with 3 sin binnings leaving them with 12 players at one point.  Collegiate capitalised on this and their forwards forced themselves over for a try on half time, 5 – 10 at the break.

Collegiate scored a try early in the 2nd half to even the scores and following a Southport penalty they then scored a converted try to lead 17 – 13 going into the final minutes.  Southport camped themselves on the collegiate line and after 2 penalties, Lewis Fusco blasted over for his second try and a Jamie Brown conversion gave Southport a deserved 17 – 20 win.

The under 15s were up against Liverpool St Helens in the only other competitive home fixture and they fought bravely before being edged out 12 – 22.

Next week: sees the Men’s 1st team away to Liverpool St Helens with the seconds at home to Preston Grasshoppers 3rd team. The third team are away at Mossley Hill 2nds and the colts away at Macclesfield.