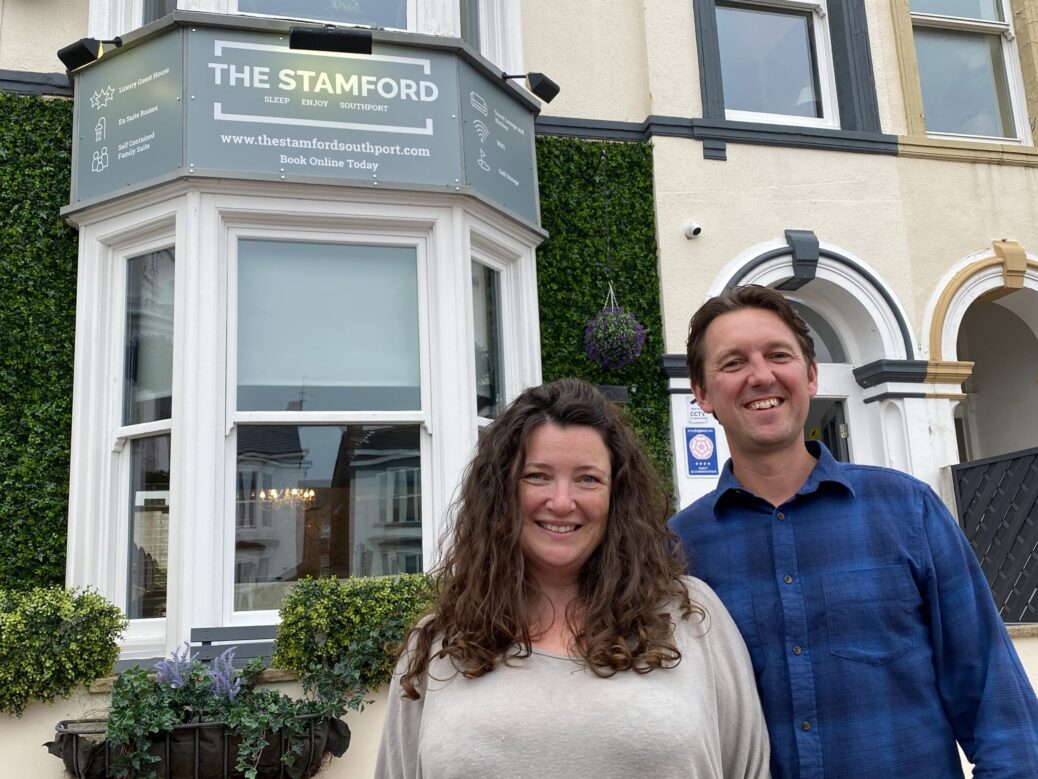 One of the top guest houses in the North West will enjoy a starring role on hit Channel 4 series Four in a Bed this month.

The Stamford in Southport, particularly popular among golf enthusiasts, was recently awarded runner-up in the B&B / Guest House Of The Year category at the Liverpool City Region Tourism Awards.

Owners Sarah and Ricky Blaney will discover if they’ve finished above par again as they compete against three other venues over five nights starting on 22 March.

The Stamford, on Bath Street, welcomes families from all over the world. Situated on England’s ‘Golf Coast’, it is well placed for people who love to play a few rounds on some of the finest courses in Britain. The guest house even has a dedicated golf room, where guests can charge their buggies and store their clubs.

Sarah and Ricky hope they score a hole in one and leave the three other contestants bunkered when the series airs.

Sarah said: “We have just found out that our episodes are being aired in the week starting 22 March!

“We thought it would be a great way of flying the flag for Southport and to show what we have to offer at The Stamford so we said ‘yes, let’s do it’. Hopefully the programme shows off our beautiful town really well.

“Appearing on Four in a Bed was a really fun experience, we enjoyed it.

“Off camera, it was a good laugh. It was great being with the film and production crew but most importantly we got on really well with the people at the three other featured venues. We are in constant touch and we value their friendship.

“On camera it is quite intense. We were filming long hours and obviously none of us are used to that type of activity.”

The competing venues in the show alongside The Stamford were all very different.

Sarah said: “There was a glamping site in Derbyshire and two traditional pubs in Yorkshire with rooms above them, whereas we are a self check-in, guest house in Southport which doesn’t serve breakfast. We all have different strengths.”

The production crew chose a good time to visit The Stamford for filming.

Southport – of course – is always sunny but when the TV cameras arrived in September, it was during particularly warm weather under deep blue skies.

Sarah said: “The sun was out and Southport was looking really good when they filmed!

“The Stamford is famous for welcoming golf enthusiasts and Southport is iconic for being at the heart of ‘England’s Golf Coast’, which has 12 of the finest golf courses in the UK.

“Initially we were going to film at the crazy golf course in King’s Gardens, but the Elvis impersonator singing at a nearby cafe wouldn’t stop singing while we were filming! So we then went to Southport Footgolf next to Southport Pier instead. They were brilliant with us.”

The Stamford guest house in Southport

When the show airs this month the eyes of the UK will be on Sunny Southport – and Sarah is feeling very anxious.

She revealed: “The Four in a Bed viewing figures are gigantic! Their social media pages have thousands of fans.

“When we were filming, people who saw the cameras kept asking me what they were for. When I told them, they all said ‘Four in a Bed is my favourite show’!

“I am absolutely dreading seeing the final edited version! I am not sure if I will be able to watch it. I hate attention in any way, being on TV is like my worst nightmare.

“I might ask a friend to watch it for me, they can tell me what’s happening…”

Who will end up holding aloft the trophy at the Four in a Bed 18th green this March? You’ll have to watch the series to find out…

●     For more details about The Stamford, on Bath Street in Southport town centre, please email: stamford@sleepenjoy.co.uk or call: 01704627061 or visit: thestamfordsouthport.com