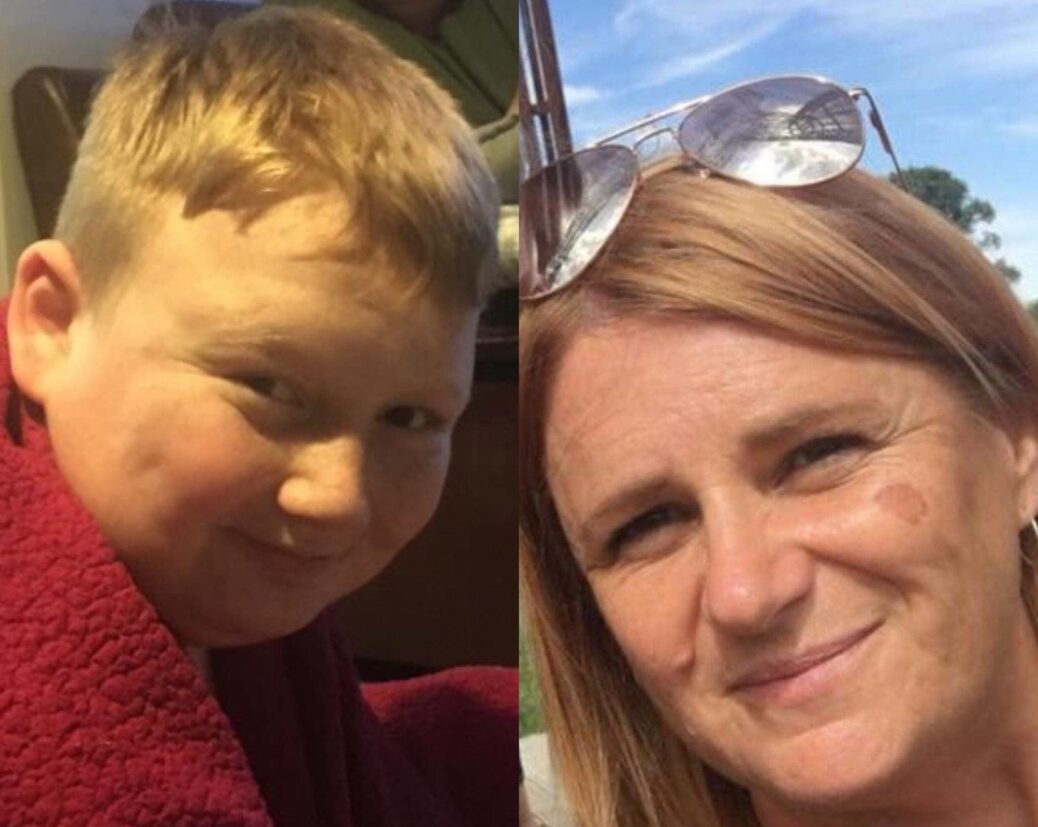 A school worker and a teenage pupil died in an horrific crash caused by a lorry driver who was using his mobile phone while driving.

Now the tragic woman’s sister is launching a safety campaign warning people about the dangers of using mobile phones behind the wheel.

Special needs school worker Anne Kerr, a much-loved mum-of-two aged 50, and 14-year-old pupil Joe Cairns, both sadly died in a collision with a 19-tonne Mercedes Arocs wagon on the M58 motorway in Bickerstaffe in West Lancashire on January 8 last year.

The pair were travelling in a nine-seater minibus on their way to Pontville School in Ormskirk, as they did every school day.

Mrs Kerr, from Southport, was a pupil transport assistant at Pontville School and had been travelling with staff and pupils in the minibus when the collision happened. Five others were injured.

Last month the driver was sentenced to eight years and 10 months in jail at Preston Crown Court. The court heard how he had opened apps during his journey including medieval fantasy game Hustle Castle and Sky Sports News, as well as sending text messages.

Anne’s sister, Elaine Wyper, who lives in Glasgow, said: “Last year my lovely sister Anne Kerr and a pupil in her care Joe Cairns set off to go to Pontville School as they did every school day.

“Their lives were tragically cut short when a lorry driver using his mobile phone crashed into the school minibus they were travelling in killing them and severely injuring several others.

The sisters were brought up in Maghull with their younger brother, John. They all went to Hudson Primary School and then went to Old Hall High.

Anne trained to be a psychiatric nurse,  moving with her husband, Simon, for his job and they lived there happily bringing up their two sons.

They moved to Southport six years ago to be nearer their parents.

Elaine said: “Anne was very involved in her nieces and nephews’ lives and loved spoiling them.

“Christmas was her favourite time of year and went all out on decorations and gifts.

“The Christmas before she died she was so upset after seeing people queuing up at the food bank to get food parcels so instead of us all buying bits and bobs contributions for Christmas dinner we all paid money and she went out and bought lots of items for the Southport Foodbank.

“At her funeral we collected for them and still donate in her memory.

“She was just like that – she always wanted to help others.”

Now Elaine is determined to help others in her sister’s memory, through raising awareness about the dangers of texting and driving while also raising money for charity.

She said: “The North West Air Ambulance sent two of their helicopters to help that morning.  The crews consisted of a doctor and three highly specialised HEMS paramedics.

“Therefore I am doing a fundraiser for them.

“My lovely friends at Print n Gift UK based in Southport have made some car bumper stickers and window stickers warning of the dangers of texting and driving.

“The North West Air Ambulance will also be promoting our stickers during Road Safety Week in November in collaboration with Brake, the national road safety charity.”

Anyone who wants to buy a sticker can do so online here:

You can choose a variety of colours, add an in memory Anne & Joe of or choose #savelives or your own in memorial. 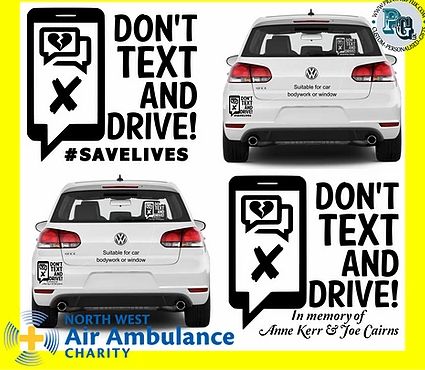 A road safety campaign has been launched in memory of Joe Cairns, aged 14, and Anne Kerr, aged 50, from Pontville School in Ormskirk, who died in a crash on the M58 motorway on January 8, 2019

Every bit of profit is going to the North West Air Ambulance.

Steph Marr, owner of Print n Gift UK, said: “Elaine was a teaching assistant at Northway Primary School in Maghull, where I grew up, and we have stayed in touch for a few years.

“Sadly there is no excuse for anyone using their mobile phone behind the wheel, never mind on a motorway!

“It was tragic for Elaine to lose her sister at such a young age, to such a tragic event that should have been just a normal day,.

“Phones are such an everyday part of our lives. But deaths should not be, not for the sake of a phone.

“We were happy to collaborate with Elaine and make a hassle free way of raising funds and that much-needed awareness.

“People can show support by going to our website and purchasing a bumper sticker for their car.

“Even if they don’t stick it to their own car, they can give it to someone else or just know that they have done your bit.”

“The charity needs to raise in excess of £9.5million each year to meet the costs of maintaining our existing service to ensure we can be there when needed. We receive no Government funding or National Lottery gifts, we are solely reliant on the generosity of our supporters and members.”

Paying tribute to Mrs Kerr after the crash, her family said her death had left them heartbroken.

They said: “Anne was much loved by all who knew her. She will be deeply missed by all her friends and family.

“She was a daughter, wife, and mum to two lovely boys.

“She was a lovely personality to be around. Her death has left us all heartbroken.”

She said: “Our hearts are filled with sadness as we grieve the tragic loss of Anne Kerr.

“Anne was a caring member of staff who went out of her way to support the young people at Pontville.

“We have been inundated with condolence wishes from our families and pupils, including those involved in the incident.

“Our thoughts and sympathies are with Anne’s family.”

Inspector Claire Pearson from Lancashire Road Policing Unit said: “In my mind there’s no question that driving a 19 tonne HGV at 56 miles an hour, whilst not fully concentrating on what’s happening in front of you, is extremely dangerous.

“Joe and Anne’s families can’t bring their loved ones back but what they have asked is that people listen to what has happened here and learn that it is never safe to use a phone whilst you’re driving.

“So, if you are ever tempted to check your phone while driving, even for a second, think of Joe and Anne, and don’t do it. Just one glance can mean the loss of a life.”