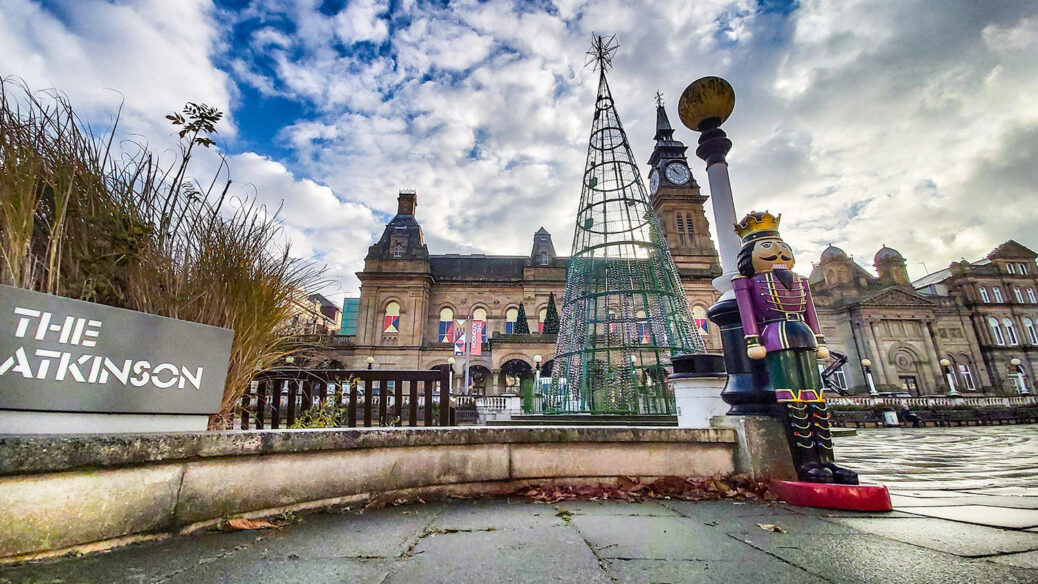 The Atkinson in Southport has tonight won two major awards at this year’s Liverpool City Region Culture and Creativity Awards.

The arts and cultural hub on Lord Street was honoured for its outstanding contribution towards culture, and for how well they adapted to the Covid-19 pandemic.

An Atkinson spokesperson said: “We are overjoyed to win two awards tonight at the #LCRCultureAwards2020.

“The People’s Choice award for Outstanding Contribution to Culture and the Impact Award – Covid-19 Creative Response.

“Thank you! The Atkinson will continue to champion the enjoyment of arts, culture and heritage, where residents, visitors and communities can be entertained, inspired, continue learning and improve their wellbeing.

“Congratulations to all the finalists and winners, what an amazing evening celebrating culture and creativity across the Liverpool City Region.”

Paul Curtis, who created the stunning four-storey Red Rum sculpture on a building on the corner of the Promenade and Scarisbrick Avenue as part of Sefton Borough Of Culture, won Artist Of The Year.

The winners of the 2020 Liverpool City Region Culture and Creativity Awards were revealed in a unique online ceremony to celebrate the outstanding contributions to the industry in what has been a challenging year due to the Covid-19 pandemic.

Hosted by Coronation Street and Emmerdale actress, Huyton-born Eithne Browne, the ceremony was broadcast live into over 300 homes where the finalists were standing by waiting for the winners to be announced.

Guest presenters from across the city region including the Principal Dancer of the Royal Ballet Matthew Ball, music artist and international DJ Yousef, actress Leanne Best and chef Paul Askew helped distribute the accolades by video link in the 15 categories.

The People’s Choice – For Outstanding Contribution to Culture The Atkinson, Sefton

Artist of the Year Paul Curtis

Arts Organisation of the Year Writing On The Wall

Borough of Culture ‘Star of the Year’  Claire Morgans – Ykids

Dress it Up competition

Metro Mayor of the Liverpool City Region Steve Rotheram said: “I always like to say that the Liverpool City Region is the country’s cultural capital; that creativity is in our DNA and we’ve really seen that on full display during this past year. Despite the challenges of the pandemic, our region has continually responded with imagination, creativity and generosity to keep us all connected and our spirits high.

“I’d like to congratulate everybody who has been nominated for an award and give a special congratulations to our award winners. I know that all of these fantastic organisations and people will play an integral role in the region’s recovery after this pandemic – I can’t wait to see what they will produce.”

A panel of judges including Co-Chairs of the Culture Partnership Phil Redmond and Maggie O’ Carroll, chose the finalists from more than 700 nominations this year.

Maggie O’ Carroll said: “Despite the region’s museums, art galleries, theatres and music venues having to close their doors for the best part of the last year, it was heartening to see how many nominations we still had for this year’s awards and the quality of work we received which made the judging all the more difficult!”

The cultural and creative sector has been responsive and has shown to be a lifeline for many communities. It has proved invaluable in supporting people in their own health and well-being during these extraordinary times.”

Phil Redmond said: “Congratulations to all the winners tonight at what was a dynamic digital ceremony. I’m delighted we could still get together using the power of technology to celebrate this year’s achievements in what has been a crippling year for many cultural organisations. It just shows the resilience of the people of the Liverpool City Region who even now are making a significant impact to culture and creativity.”

During the ceremony, the Borough of Culture title was handed from Sefton to Halton, the next of the city region’s six boroughs to hold the title.

Sefton Councillor and Cabinet member for Communities and Housing Trish Hardy said: “I’m incredibly proud of how everyone took up the challenge to think differently about how we could present this year’s Borough of Culture in Sefton. Covid-19 has had a massive impact in all areas and I am grateful for all the hard work that went into what has been a difficult year for the cultural and creative sector.”

“As we move forward into 2021 and into Halton’s Borough of Culture year, hopefully with the ongoing vaccine roll out there will be the opportunity to enjoy some of the culture and creativity the borough has to offer in more normal circumstances. We are looking forward to celebrating Halton’s Borough of Culture year and to further build on the fantastic work we have seen in previous years.”

Liverpool Designer Mary Lamb, Head of Liverpool based costume and fashion production space fabricationstudios, also announced the winner of the Dress it Up competition which was awarded to Velma Von Bonbon in the amateur category and Emma Russell in the professional category.

The Culture and Creativity awards were created as part of the Metro Mayor’s Percent for Culture initiative, to recognise the value and power for change that the arts, cultural and creative sector can bring in reinforcing the city region as one of the most vibrant and exciting places to live, work, study, visit or do business. The 2020 awards are delivered in partnership with Sefton Borough of Culture 2020 and sponsors including LuBan Restaurant, LuBan Kitchen, INNSiDE by Melia Liverpool, Davies Partnership and Accountable Recruitment.

This year’s awards covered arts and cultural events, innovation and creative activity that took place within the Liverpool City Region during the period 1st April 2019 to 12th November 2020.