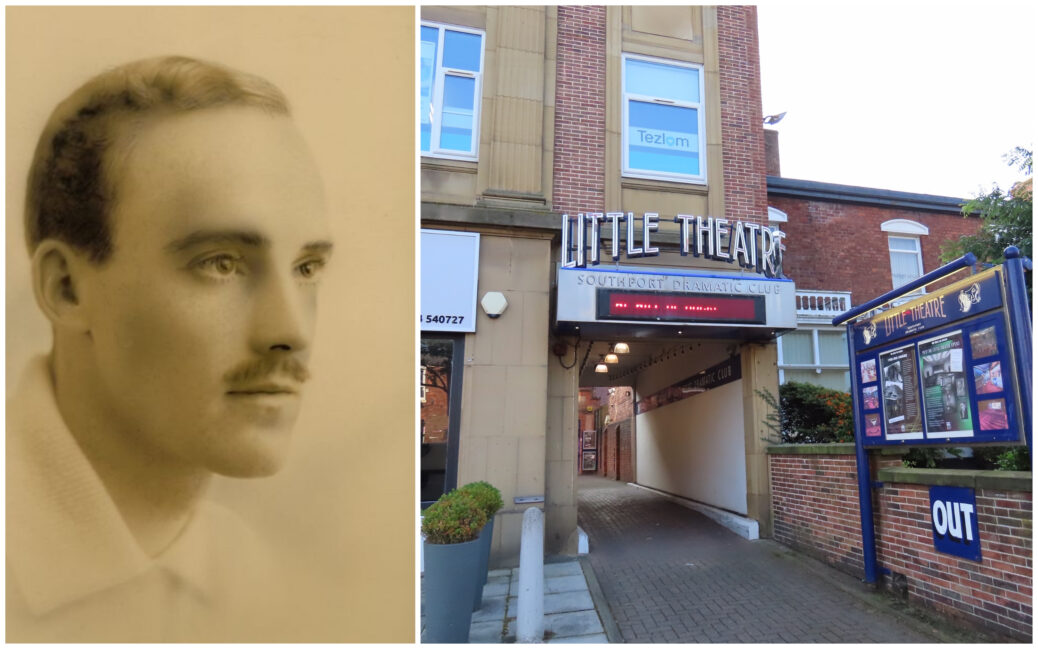 The early years of Southport Dramatic Club and the Little Theatre are today shared by Rev Mrs Angela Robinson, partly thanks to the recollections of her Father.

Vyvian Vercoe Pedlar (1892-1979) was an acclaimed actor who entertained troops during the First World War (then known as The Great War) before treading the boards at the Little Theatre – and even enjoying one of the very first SDC weddings.

Rev Mrs Angela Robinson also has some revealing insights into some of the most iconic aspects of Southport’s history, including the birth of the much-loved The Wayfarer shop, the old days of Leyland Arcade (now Wayfarers Arcade) and the growth of the iconic Broadbents department store.

With theatres currently under temporary closure due to Covid lockdown restrictions, she asked: “Are not Amateur Dramatic Societies a key part of local culture in very many ways?”

Stand Up For Southport is keen to keep Southport history alive – we would love to hear your memories and see your old pictures of Southport!

Rev Mrs Angela Robinson (nee Pedlar) said: “I have read with interest the articles on the Little Theatre in Southport that have recently been published in the Southport Visiter and, before I exit, Stage Right, into the drama of the next life (I am 82 now!) I thought I better record what stories I heard from my father about the early days of the Southport Dramatic Club.

“I do not know at what point my Father came to live with his elder, sister, Evelyn Pedlar, at 31 Grosvenor Road.

“‘Aunty Lyn’ was Senior Maths Teacher at Ormskirk Grammar School. She got her degree from Liverpool University before the First WorldWar!

“Her home became also that of their father and mother (Rev Joshua Pedlar and his wife Emily) when he retired from his last church, the Congregational Church, in Chorley.

“I suspect Father was added to the household, when he was recovering from a burst appendix – you usually did not live after peritonitis – and he did –  but it took him nine months to stand up straight because of all the stitches down his front! 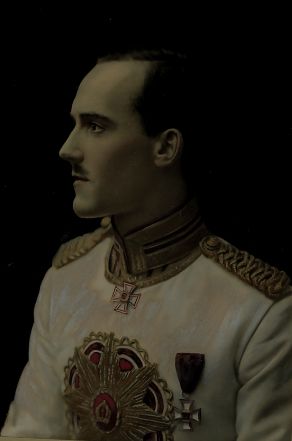 Vyvian Pedlar. Written on the back of the picture, in his writing (he was taught as a boy to write copper plate) was that this was the costume he wore in the leading part – the Grand Duke in Daly’s London production of Sybil in 1921 or 1922.
This suit, with overcoat and helmet cost over £100 – a considerable amount in those days.

“He had left the stage and been selling the products of Sunlight Soap and happened to be staying in Nottingham at the same time as the brilliant young surgeon who saved his life.

“Father had a beautiful baritone voice, trained by an Italian called Veeco (probably spelt Vico) when he was in Liverpool, at 16, in 1908, working in a bank.

“When he could not afford the lessons, Vico said, ‘You come! You come!’

“As war approached he joined the Royal Naval Air Reserve (later part of the RAF) and was quickly enlisted to entertain the troops along with an ex-concert pianist.

“Quite soon, they built up a concert party which must have been of a good standard as they were considered too valuable not to be sent off to the war but went along the south coast camps, entertaining the troops, some of whom were mutinying as the news came in of the bloodbath on the other side of the Channel.

“Of course, he had an earlier training as a mere lad, in his father’s church, in the Pleasant Sunday Afternoons in his father’s Mission Chapel in Rock Ferry in the slums of Merseyside, when around 200 working men packed the church and expected to be well enough entertained – by community singing and those doing their ‘party pieces’ – to keep them out of the pubs, and thus not spending  their wages and risking their family going hungry the following week…

“Soon he had chaps tapping on his shoulder, telling him that they could get him a job after the war, so, when it ended, he went on the stage.

“The theatre of the 1920s revolved around big musicals in which the leading actors were expected to sing, act and dance. Father had not only a beautiful baritone voice, but was light on his feet and danced well and had a good stage presence and, at first, went into revue and then into musicals.

“Daly’s Theatre sent out FIVE touring companies with their major show and Father took the lead in the number one tours and said he had seen his name in lights bigger than the name of the show!

“He left his acting career because he was engaged to an actress who said she would not marry an actor! The engagement later broke off and Cora Goffin married the impresario Emile Littler and, when she died, had an obituary in The Observer!

“After recovering from peritonitis, he turned up at the Southport Dramatic Club. By then his sister and he had started a most unusual shop in some rooms over Connard’s Jewellers on Lord Street in Southport where they were to stay for nine years.

“Their first customer came in and said, ‘You are hoping to sell THIS stuff to Southport people? Oh, dear! Oh, dear! Oh dear!’ and left. The ‘stuff’ was of the Arts and Crafts movement and the shop was called The Wayfarers which, in 1935, moved into the almost empty ‘Leyland Arcade’ – and the rest is history! 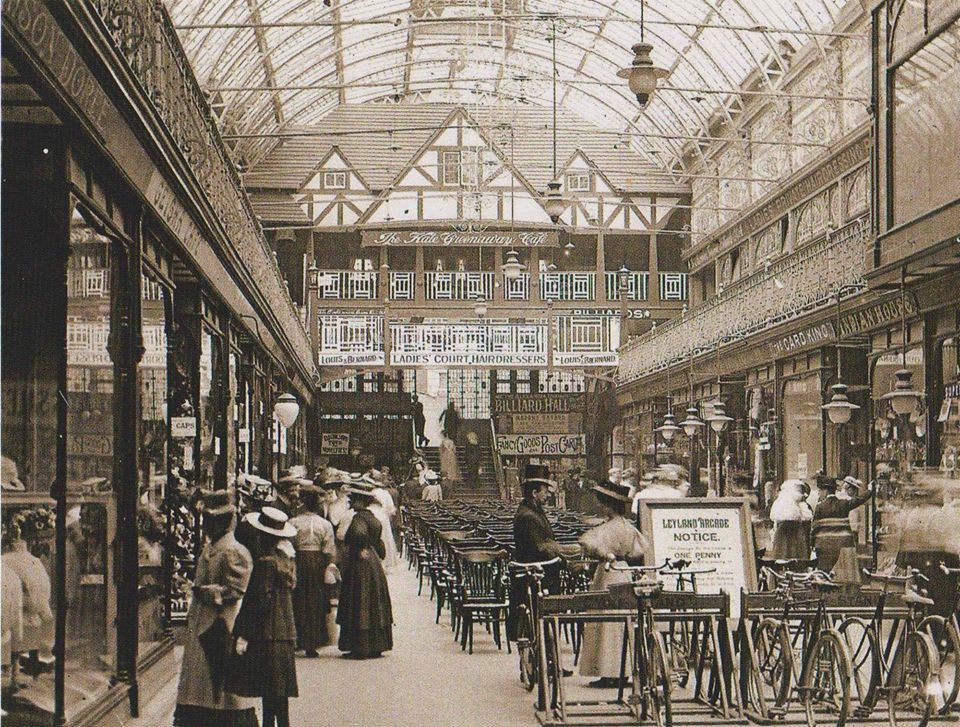 “My mother, Margaret Mercy, belonged to the SDC and did not act but helped backstage – and that is how they met. Father was in his 30s and a bachelor and she told me, ‘When your father joined, all the girls were after him but I stayed in the background and your father saw it and liked it!’

“Soon the first couple who had met through the SDC were married – Jack and Dorothy Todd – and at the wedding breakfast, Father said what fun these SDC weddings were and could they have another one soon and, turning to his future wife, said, ‘What are you doing three weeks on Thursday?’ In mock horror, telling this story, he would add, ‘and she took me seriously!’

“Before the SDC had their own theatre, they would hire the Garrick Theatre (now a Bingo Hall).  “They put on a drama on Monday, Wednesday and Friday and a comedy on Tuesday, Thursday and Saturday and Father would usually take the lead in both!

“Margaret Mercy’s father, Arthur E. Mercy, was a Birmingham orphan, converted by the great Dr Dale of Carr’s Lane Congregational Church when the churches and the Liberal Party under the local MP, Joseph Chamberlain, practiced local government in a way that became a role-model for the nation (and there was I, reading History at Oxford, and I never asked my grandfather about his past!)

“He came to Southport for a job at the new hospital but didn’t get it and persuaded the Board of a little draper’s shop called Broadbents that he could be their secretary and proceeded to build it up, over his life-time, to be a department store. 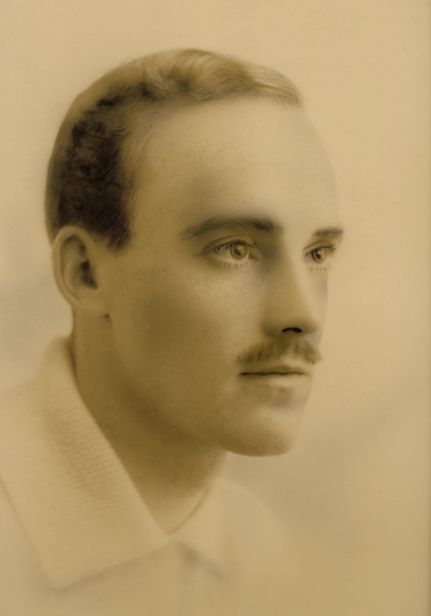 Vyvian Pedlar, taken as a publicity photo when he was on the stage in the 1920s

“Not surprisingly, he did not know what to make of this ex-actor with his funny little shop that did not make much of a profit. He called him ‘that actor chap’! His younger daughter was already married to a Yorkshire Mill owner but was this guy really a suitable husband for his eldest daughter?

“With a wry smile my father told me that, when the SDC were ready to build their own theatre and had a meeting with local business people, Grandpa Mercy was the first one to get up and put his £50 on the table and others followed him.

“It seems that ‘the actor chap’ had managed to persuade his father-in-law  that an amateur theatrical company had a real part to play in local cultural life – and long may that continue!

“Before you next enter the auditorium, look at the list of Founders on the right and there he is – AE Mercy! 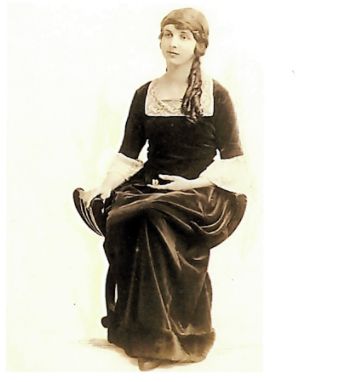 “The Little Theatre was built in time for World War Two at which point the Sheffield Repertory Company were looking for a theatre less liable to be bombed than theirs.

“One day, Geoffrey Ost, its Director, came to have a look at this new Little Theatre in Southport and Father heard him say, ‘A repertory producer’s dream!’ They came.

“He and his wife and son, Roger, lived with us for some time and the rest of the company found somewhere to stay and Southport really enjoyed their presence. Lally Bowers took the older woman’s parts and who can ever forget her playing a very senior Fairy Godmother who kept tripping up and, every time she went off, it was to the cry – ‘T’is love, t’is love, that makes the world go round!’

“At Oxford, I took part in Ken Loach’s first production and was in revue with Esther Rantzen and later, spent a happy year out of teaching, 1964-5, working as an Assistant Stage Manager at the Sheffield Rep.

“I played the Fairy Godmother and, in the revue at the end of the season, did more than the leading lady but then I could sing!

“In the only two years I lived in Southport since I was 16, I happily took the part of a mermaid in one production of the SDC and, since my retirement here, have enjoyed attending plays, including those in which my sister-in-law, Valerie, takes part.

“I met my future husband in the Hemel Hempstead Amateur Dramatic and Operatic Society and his parents met in one too!

“Are not Amateur Dramatic Societies a key part of local culture in very many ways?”

Do you have memories or pictures of life in Southport that you would like us to share through Stand Up For Southport? Please message Andrew Brown via Facebook here or email me at: mediaandrewbrown@gmail.com