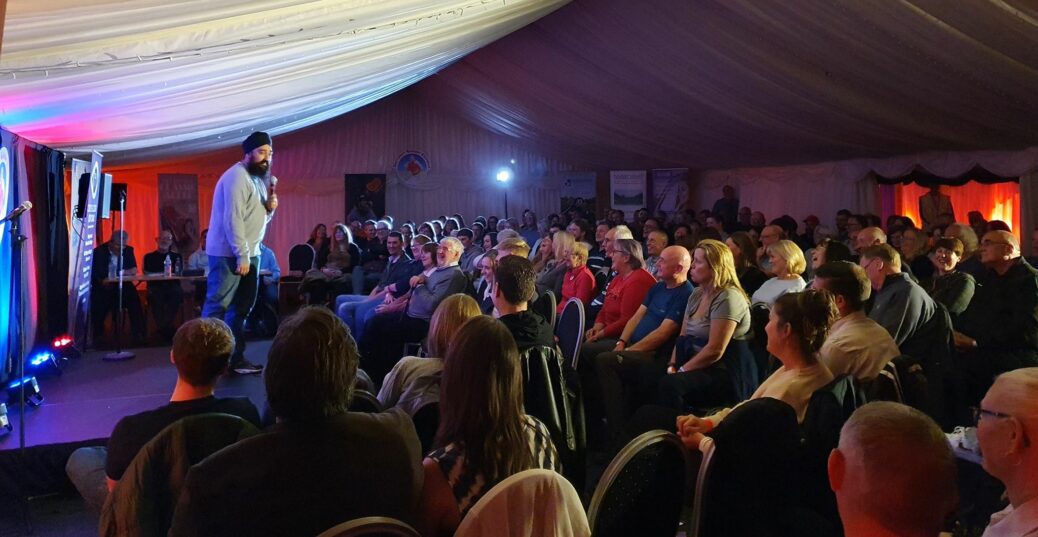 Southport Comedy Festival 2022 has launched its search for the next Southport New Comedian of the Year.

Aspiring comedians from all over the country have been invited to apply to win one of eight places in the grand final which takes place on Tuesday 4th October as part of the 11th annual Southport Comedy Festival Under Canvas at Victoria Park in Southport.

This year’s event is sponsored by Dragon Soop, a caffeinated alcoholic beverage that comes in a range of flavours.

“Dragon Soop is delighted to be involved with this popular festival and wish all acts a Sooper experience!” – Isabelle Kent, Sales & Marketing Director

The Southport New Comedian of the Year competition is open to all comedians who have less than four years’ experience of performing before a paying audience.

Applicants are asked to upload a short promo video onto YouTube. You can find more details on the New Comedian Competition page on the Southport Comedy Festival website.

The winner will be selected by a panel of judges and will be awarded the coveted title of ‘Southport New Comedian of the Year 2022′, in addition they will also receive a cash prize and a trophy kindly provided by Dragon Soop.

Southport Comedy Festival Director Brendan Riley said: “We are thrilled to have Dragon Soop onboard as our sponsor for the New Comedian competition, a highlight of our festival providing a springboard for new talent.

“With so many big names performing at this year’s festival it is great to offer a night that promotes and encourages new comedians who are starting off in their career.

“For comedians to win this competition, or to come second or third, it means you have been spotted, it is a great thing to put on your CV.

“A lot of comedians have gone on from this competition to enjoy full professional careers. They come and enter the competition from all over the UK.

“Tickets for our New Comedian of the Year final are just £5 each. We always keep our ticket prices low, to make our events as accessible as possible.

“The final is always a great night with sell out shows in the past. So come along to encourage new talent and help them become the stars of tomorrow!”

The Southport New Comedian of the Year event is part of the 17 day Southport Comedy Festival in association with Halliwell Jones BMW with a star studded lineup to include Al Murray The Pub Landlord, Milton Jones, Paul Sinha, Jo Caulfield, Ed Byrne, Reginald D Hunter to name just a few.

Courtesy of Elite Marquees, this year’s festival will be staged once again in a giant luxury heated and seated marquee in Victoria Park, home of the world-renowned Southport Flower Show, between 30th September and 16th October.

The Southport New Comedian grand final will take place on Tuesday 4th October. Tickets are just £5 each, and are available from the Southport Comedy Festival website.

*Dragon Soop should only be consumed by adults aged 18+. Please enjoy responsibly.