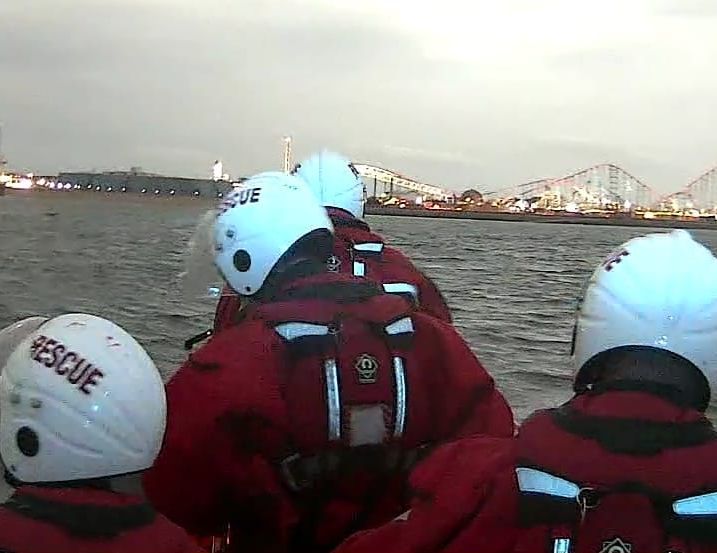 Southport Lifeboat has launched a new tidal safety campaign – #ItsBehindYou – to remind beach visitors of the need to be on the lookout for tides when enjoying beaches at Southport, Ainsdale, Formby and Crosby.

In anticipation of another busy spring and summer, the safety campaign has been instigated to ensure everyone knows about the dangers of becoming cut-off by the incoming tide.

Banners with a special QR code have been placed along the Ainsdale and Southport coastline. When scanned, the code takes the beach user to Southport Lifeboat’s website which contains the day’s tidal information, information on the #ItsBehindYou campaign, along with further coastal safety advice.

What is the #ItsBehindYou campaign?

Many people are unaware of the movement of nearshore waters. While it may appear that waves undergo a simple cycle; it can in fact create dangers for beachgoers.

#ItsBehindYou aims to inform the public about the basics of tidal phenomena and encourages beach visitors to check the tide times each and every time they visit the coast.

Those visiting local beaches are also urged to be aware of their surroundings and ultimately to check behind them to identify whether they are at risk of becoming cut-off.

Why is this important?

The Southport coastline has shelf seas that lead to large tidal ranges – one of the largest tidal ranges in the world.

The North West’s coastline is unique. Its apparent flat profile is deceiving.

Upon closer inspection, the beach is riddled with raised sandbanks, micro-channels, rills and gullies.

It is the difference in beach elevation that means people become cut-off. Why? Because as the tide rises, it fills the areas of lowest elevation first, which may be behind you.  As this water joins to another channel, or the waterline further up the beach, you have become cut off.

In am emergency, call 999 and ask for the Coastguard.

If anyone ever finds themselves cut-off, or notices someone in difficulty, call 999 and ask for the Coastguard.

More information about Sefton’s beaches can be found on the Sefton Council website. Always plan ahead when you visit the coast and follow important information from the Lifeguards and Coastguard to ensure you enjoy your time their safely.