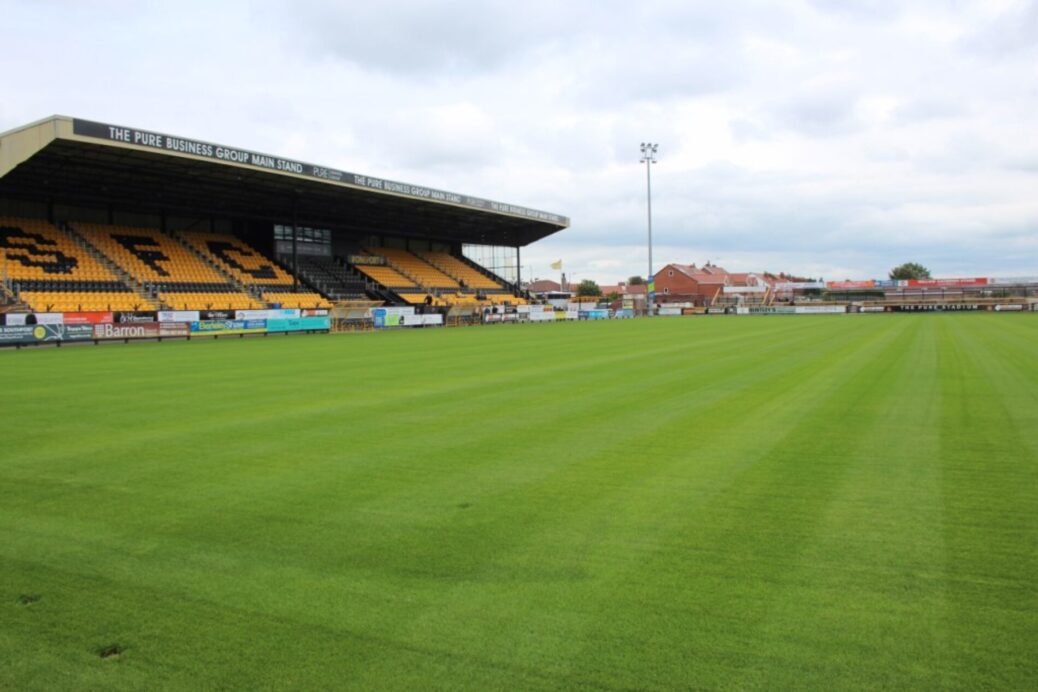 Southport Football Club are waiting to discover whether fans will be allowed in to watch games when the 2020/21 season starts next month.

Southport FC Manager Liam Watson and Director Ian Kyle have previously backed the Let Fans In campaign calling for a special exemption that enables non-League football clubs to welcome fans back into their grounds.

Southport’s first home League game of the new season at The Pure Stadium is due to be played against Hereford on Tuesday, October 6, kick-off 7.45pm.

National League Chairman Brian Barwick has today written to Oliver Dowden CBE, Secretary of State for Digital, Culture, Media and Sport, to ask the Government to carefully consider how its pending decision on the return of fans to football grounds will affect its clubs, their employees, and local communities.

The National League has also asked the Government for permission to commence the new season on October 3 with fans in attendance with social distancing and other Covid secure measures in place.

Since the onset of the pandemic, the National League has closely adhered to Government policy and fully recognises the overwhelming necessity to protect people’s health and well-being.

Following the Prime Minister’s announcement on July 17 that the Government intended to bring back audiences in stadia from October each club has started to prepare for the 2020-21 season.

The National League has set the start date as October 3, which is when 24 clubs would be due to play their first league match and a further 43 clubs are involved in FA Cup ties. Southport FC is due to play an FA Cup Round 2 Qualifying tie on October 3.

In readiness for the safe return of  spectators, National  League clubs have calculated  their ground’s new  socially-distanced  capacity.

Whilst crowds could be accommodated up to a level of 20-30% of each stadium’s  normal  capacity in accordance with the Sports Grounds Safety Authority guidance, the National  League  has asked the Government  to allow up to 1,000 spectators in all grounds from October as a temporary solution that is validated by the Government’s approved pilot events conducted in September.

Brian Barwick said: “The National League restart depends upon crowds being allowed back in stadiums as live attendance is our clubs’ largest source of income.

“The Government urgently needs to set out a credible pathway for the safe return of supporters, and to ensure our football clubs can continue to function, and to perform their significant role in the sporting life of the country.

“We are proud to be a national competition with strong local connections.”

Speaking to Stand Up For Southport last month, Ian Kyle said: “As regards the Let Fans In campaign it is clearly a difficult balance, complying with the ever-changing Government guidelines whilst, most crucially, ensuring everyone stays safe and healthy.

“From the perspective of Southport FC, we are spending hours on end each week to ensure that we are carrying out all the necessary safety and anti-Covid measures needed to make The Pure Stadium a safe environment.

“We are ensuring that social distancing is maintained, that there are sufficient hand sanitising stations around the ground, and face masks are worn as and when necessary. The appropriate Covid cleans are carried out on a regular basis.

“To that end, we are more than confident that the club is a safe environment and that we could manage the return of fans tomorrow if necessary.

“Live football would indeed be the ideal tonic for many to get them back out and about, and to help return to ‘normality’.

“This is even more the case when you consider that we are in the outdoors as was recommended so highly by the Government from early on in the lockdown.”