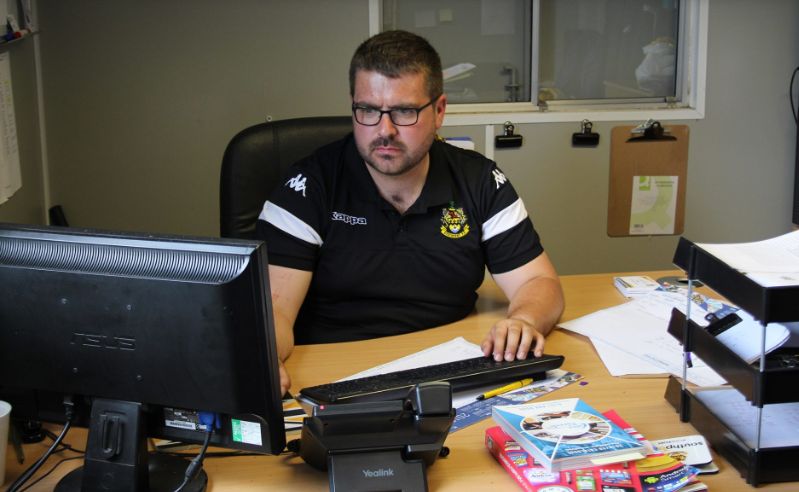 James has been with the club just over two years and in that time he has contributed so much to the effective running of the club, turning the role from a basic secretarial job into that of an operational management post.

He has become the focal point of all communications from the club, providing supporters with regular updates through audio and video output as well as representing the club on a national level at various meetings, proving himself to be a very capable and well respected spokesperson.

James had a baptism of fire taking on the job ahead of Southport’s highest ever Non League home attendance when they played Tranmere Rovers in the FA Cup and has, in his own unique style, gone on to ensure the smooth day to day running of the club.

The last few months have provided him with a massive test getting to grips with the myriad of COVID Protocols and it was testament to the hard work and attention to detail that James put in that Southport Football Club was the first club at their level to be allowed to play in front of fans.

James has turned his hand to everything the club has needed on a day to day basis supporting community, commercial and media activity and he has built up a great rapport with supporters, volunteers and fellow clubs.

Southport FC Director Ian Kyle said: “This is a great opportunity for James and we couldn’t stand in his way.

“He is ambitious and keen to progress in football administration and this job gives him a great platform to further his career.

“He will be missed as he has built up so much knowledge at Southport and will be a hard act to follow but, as with any player seeking to progress, we wish him well at Chelsea and thank him for the outstanding work he has done at the club.

“James has gravitated from a club secretary, to someone to turn to and seek his advice and opinion on the many ups and downs that we have been through over the last couple of years.

“I know that whenever I ring him, be it first thing in the morning or late in the evening, he is ready and willing not only to talk all things Southport, but also to take any necessary action. “James is both a valued employee and has become a good friend to many at SFC, including myself and to that end he will be a hard act to follow.”

James Tedford said “I never joined Southport FC as a fan but I certainly leave as one. I always maintained when Ian Kyle took over as majority shareholder that I would remain at the club for as long as he did.

“The lack of forward thinking at the league and the draw of working in a world class facility day in day out was too much to turn down.

“I can’t thank the volunteers enough at the club who have supported me throughout my time. Hamish and Christine have been my work parents and David Barnes my go to guy for everything relating to Haig Avenue.

“The media team over the last few months have been outstanding as well as “the lads” at the ground whose efforts sometimes go unnoticed.

“What we have achieved since May 2019 has been nothing short of extraordinary. We cut our cloth accordingly, an action that, in my opinion, saved the club from extinction during this pandemic. The pitch redevelopment (second time around), fully integrating the juniors and women’s teams as well as being the first non-league club to have fans back.

“The club is in very safe hands with the current board and I am proud to have played my part in this process.

“I look forward to attending the ground as a fan in the near future.”