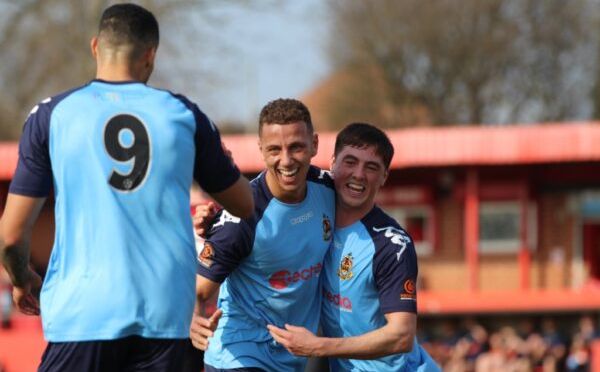 The classic game of two halves with Southport FC winning the first 2-0 before the hosts came back to draw 2-2 in the second period,

After a slow start Southport started to find their feet with Jack Bainbridge firing straight at the ‘keeper when well placed and Jordan Archer heading over.

It took some Connor Woods, who had started brightly, magic to unlock the Alfreton rearguard and that allowed Dylan Vassallo to slot home from 6 yards out after 23 minutes

It got better for Southport in what was a turning point of the game. Firstly Woods was cynically fouled which saw him unable to carry on (no card shown) and he was replaced by Josh Hmami. Up stepped Charlie Munro to fire home the free kick straight through a crowded penalty area for his first goal for the club and Southport’s first goal direct from a free kick this season.

Southport were now dominant and should have increased the lead twice with Tyler Walton and Chris Doyle both going close.

The loss of Woods who looked back to his best was a blow.

The second half was a complete transformation with the veteran and outstanding Matt Rhead causing havoc amongst the Southport back line and it was Rhead who was on the end of an Adam Lund long throw (and these were long) to pull a goal back.

Southport were under a heavy bombardment and it was no surprise when the home side levelled in the 64th minute as Dayle Southwell ran on to a through ball to slot home and make it 2-2, some vain appeals for offside fell on deaf ears.

The home side looked the more likely to grab the winning goal at this stage and only a string of fine saves by Cam Mason kept the scores level as Alfreton piled on the pressure.

To their credit Southport hung in there when it would have been easy to capitulate and gradually came back into the game without any great threat until the 90th minute when we had the ball in the net but the referee adjudged there had been a foul on the ‘keeper.

The Southport FC fans behind the goal were not in agreement with the official and made their feelings known!

Over the 90 minutes a draw was a fair result. Disappointed to come away with only the one point after taking a 2-0 lead but relieved with the point at the end after the second half onslaught.