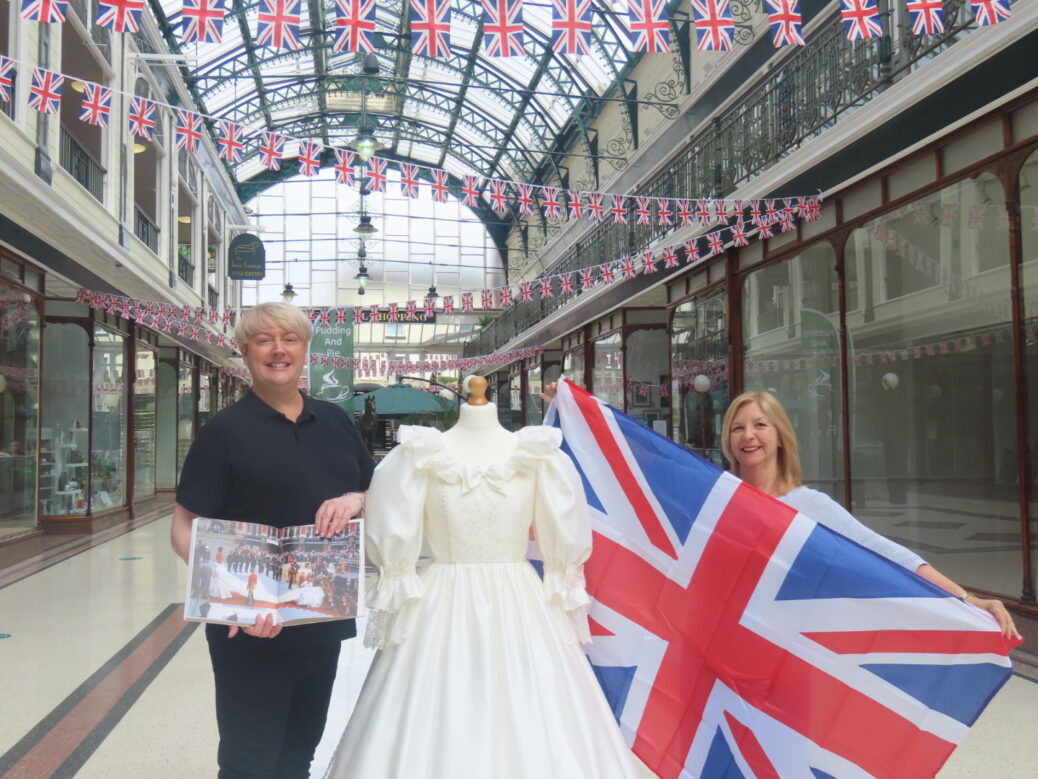 The genius who created a stunning replica of the world’s most iconic wedding dress for a special exhibition in Southport is joining the campaign urging people to ‘Fly The Flag For Queenscourt’.

Mark Lyon-Taylor spent several weeks designing his version of the famous dress worn by Princess Diana which she wore when she walked down the aisle to marry Prince Charles at St Paul’s Cathedral in London on Wednesday, 29th July 1981.

A decade later, on 11th June 1992, she would officially open Queenscourt Hospice in Southport, which serves families across the Formby, Southport and West Lancashire area.

Thirty years on from that date – and as we prepare to celebrate The Queen’s Platinum Jubilee – Queenscourt is encouraging people to support the vital work of the hospice by signing up to the Queenscourt Lottery.

With Queenscourt Lottery, you can win up to £1,500 each and every week, with a second prize of £100 and 20 other prizes of £20 each week – and, better still, you’ll be making a real difference to Queenscourt each time you play.

Mark’s creation is taking centre stage in a special fashion exhibition to celebrate the Queen’s Platinum Jubilee at Wayfarers Arcade, on Lord Street, in Southport, from Saturday, 28th May 2022 until Sunday, 12th June 2022.

Mark, 43, from Southport, is a professional hairdresser who has a real affinity for Wayfarers Arcade, as he works at The Hair Lounge which is based there.

As a hobby, he has a real passion for fashion design.

The lockdowns during the Covid-19 pandemic gave Mark the time and the opportunity to carry out some research about Princess Diana’s famous wedding dress.

And when he heard about the Wayfarers Arcade exhibition taking place, celebrating 70 years of fashion during the reign of Queen Elizabeth II, he jumped at the chance to make something which would really wow visitors – Princess Diana’s wedding dress.

Mark said: “This is the most iconic wedding dress in the world.

“During lockdown I carried out lots of research about Princess Diana’s dress, and began searching online for the right lace, the best fabric, although not with a specific time frame to do anything with it.

“Making this beautiful dress was on my bucket list of sewing tasks, so after five weeks and over 84 hours, 4,000 crystal transparent sequins, 4,240 Swarovski crystals and 25 metres of Nottingham Lace here she is. 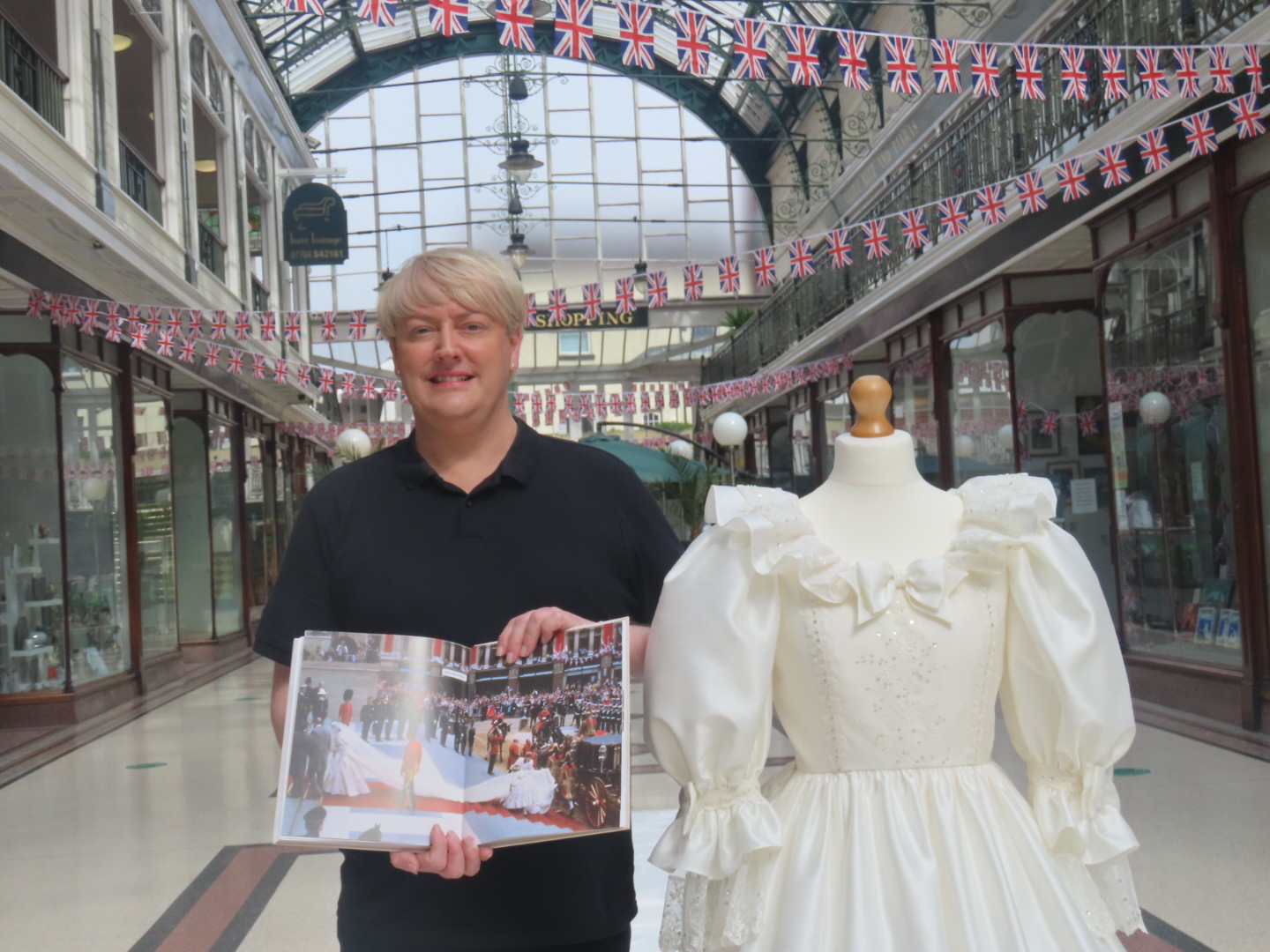 Wayfarers Arcade in Southport town centre has announced the centrepiece of its Jubilee Fashion Exhibition is to be an exact copy of Diana Princess of Wales wedding dress when she married Prince Charles on 29 July 1981, created by Mark Lyon-Taylor. Photo by Andrew Brown Media

“When I heard that Wayfarers Arcade was going to stage this exhibition, I thought this was the perfect time to create this famous wedding dress.

“It took about five weeks altogether to make it. My brother, Russell Lyon-Taylor, and my sister-in-law, Jane, spent four days helping me to make the train.”

It was a challenging task to take on, creating what is possibly the most well-known wedding dress of all time.

The dress was made of ivory silk taffeta, decorated with lace, hand embroidery, sequins, and 10,000 pearls.

It was famously designed by Elizabeth and David Emanuel and had a 25-foot (7.6m) train of ivory taffeta and antique lace.

The dress was designed according to Diana’s wishes who wanted it to have the longest train in royal wedding history.

The lavish ceremony was widely billed as a “fairytale wedding” and the “wedding of the century”, which was watched by an estimated global television audience of 750 million people! 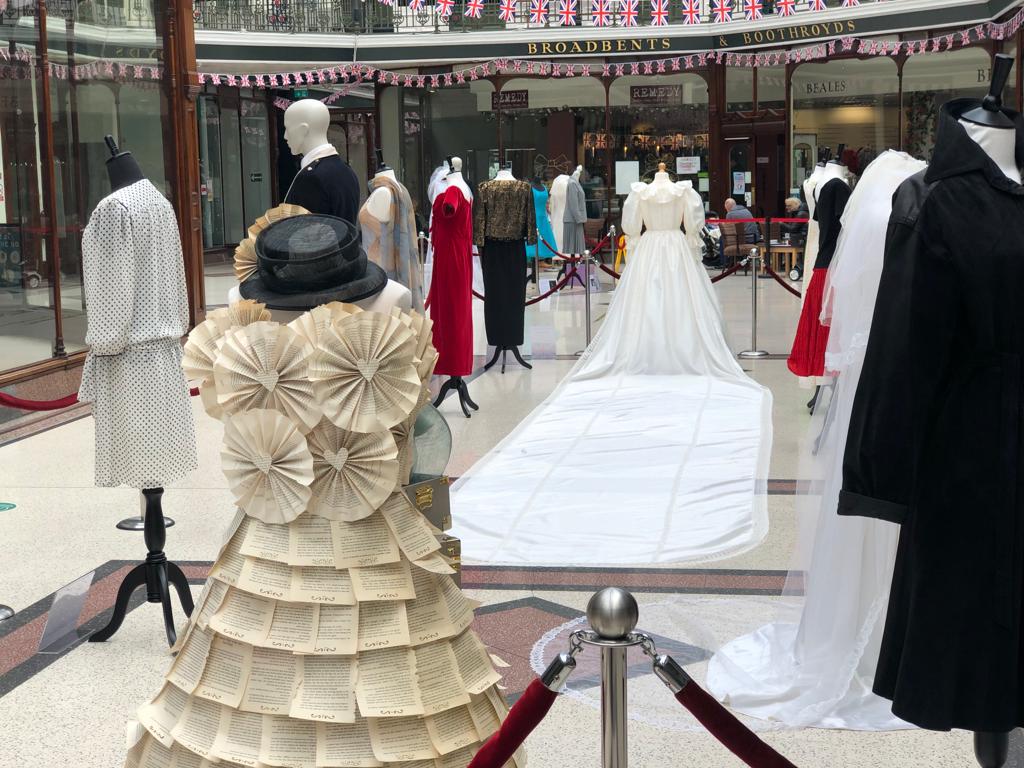 The dress created from the pages of a book, designed by Queenscourt Hospice shop manager Heather Abram, on display at Wayfarers Arcade in Southport town centre

Mark was very young when the royal wedding took place, but remembers the huge impact it had on society.

“It is just such an iconic moment in history.

“The dress that I have created is ivory coloured. It is a satin backed dupion, which is a silk effect.

“I have used 25 metres of vintage Nottingham lace, which is the same as the original dress.

“I really enjoy fashion design, it’s a great hobby to do. It has been really relaxing with everything that has been going on.

“This is the first thing I have ever made which is going to be featured in an exhibition. It is very exciting! I am looking forward to seeing the event, and all the other costumes which will be on display as well.

“It is nice to see this taking place inside Wayfarers Arcade. It is a really beautiful venue for something like this. I hope that everyone who comes enjoys it.

“I have thought about making other iconic wedding dresses in the future, such as those worn by Grace Kelly, Jackie Onassis, Kate Middleton, Princess Anne and others.” 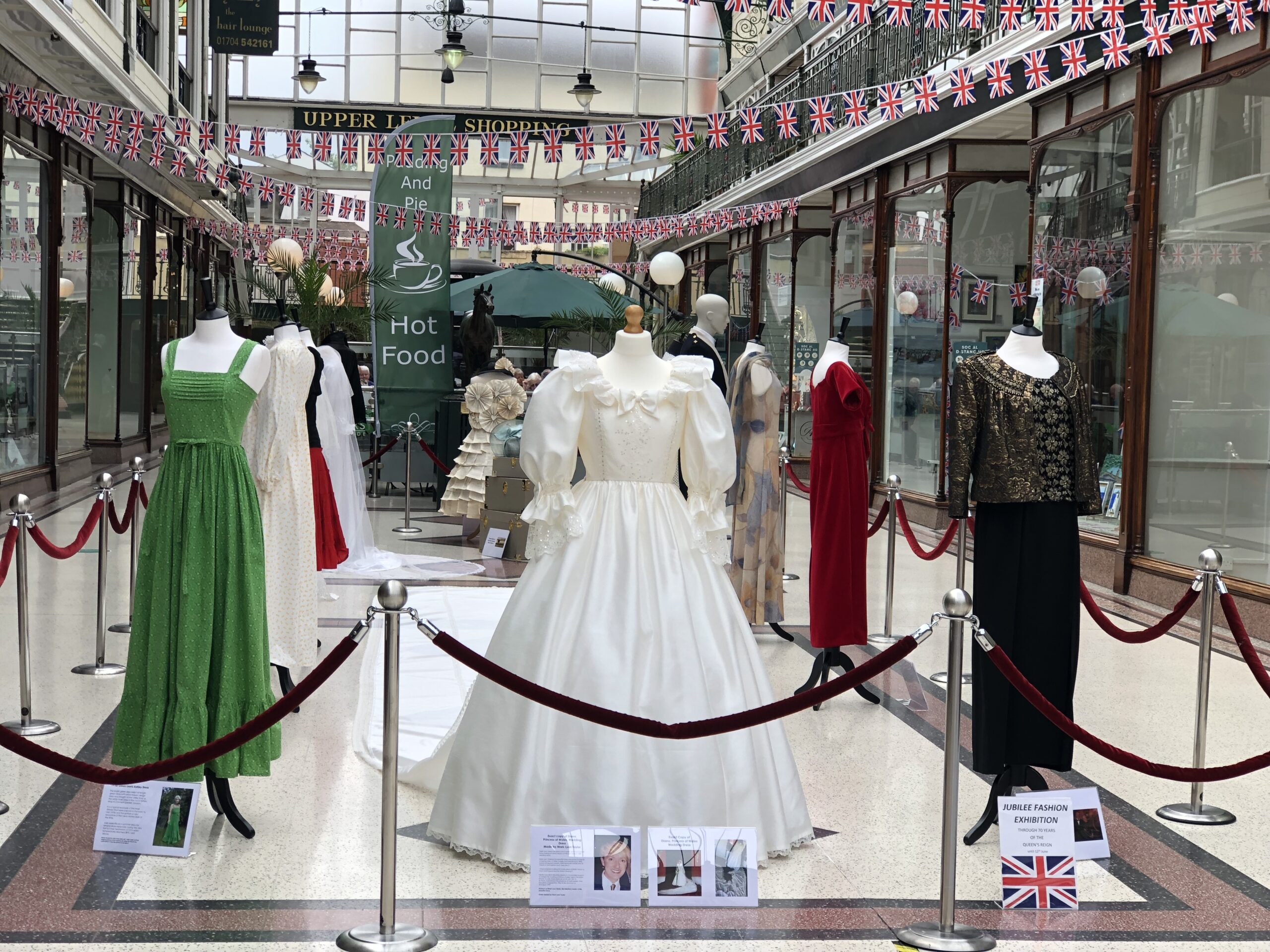 Mark is a big supporter of Queenscourt Hospice, and is encouraging people to take part in the ‘Fly The Flag for Queenscourt’ campaign by signing up to join Queenscourt Lottery.

He said: “Like so many others, I know people quite close to me who have received excellent care from #teamqueenscourt.

“The staff and volunteers at Queenscourt do such an amazing job.

“I would encourage anyone who can,to join Queenscourt Lottery and ‘Fly the Flag For Queenscourt’.

“It’s so important that we raise awareness for the wonderful care that #teamqueenscourt provides for our community, and to raise as much money as we can for them.”

By joining Queenscourt Lottery you are helping to provide the hospice with a regular source of income, so that they can continue to provide compassionate care for local patients and their loved ones, when they need it the most.

You must be aged 18 or over to join the Queenscourt Lottery. For full terms & conditions please go to Queenscourt’s website: www.queenscourt.org.uk