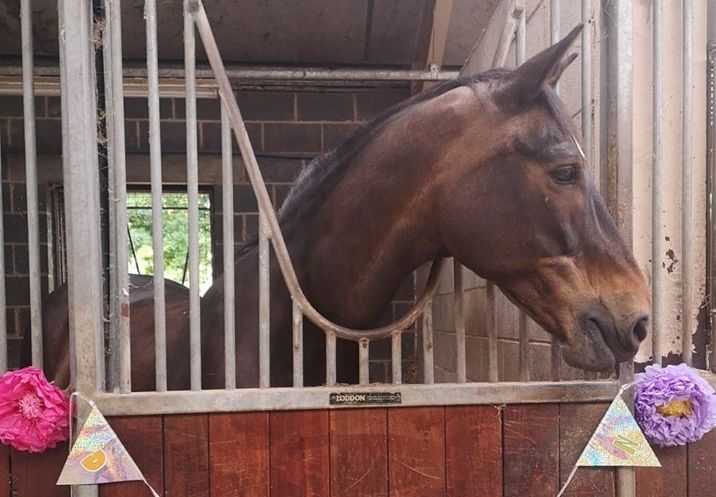 A legendary police horse who sometimes sees ‘ghosts’ in his stables and once faced down 400 angry football fans is retiring, at the grand old age of 21.

Darwen is the longest-serving police horse with Lancashire Police and has been seen by thousands of local people at events including carnivals, marches and high profile football matches. He even spent time at the London Olympics.

Born in April 1999, the Dutch Warmblood breed has been on patrol for the past 13 years, starting work in December 2007.

A Lancashire Police spokesman said that Darwen “sometimes sees ‘ghosts’ in the riding school and has been known to suddenly dart away from the boards for no reason! Spooky!”

He doesn’t like being fussed over by members of public and his least favourite thing is apples – he is the only horse at Lancashire Police who doesn’t like them.

A spokesman said: “Our oldest and longest-serving police horse will be heading off into retirement later today and we hope you’ll join us in wishing him the very best at his new home.

“PH Darwen, aged 21, will be going to live at the Horse Trust in Buckinghamshire, having served in Lancashire Police for a phenomenal 13 years.

“In his time with us Darwen has worked on dozens of major events including the London Olympics and all of Lancashire’s high profile football matches. He has also worked at several other events, including marches and carnivals.

“He is an agile horse who has also been used for training officers in the riding school.

“He is known as gentle, steady and reliable, and always happy to follow his four-legged colleagues into difficult situations.”

Sgt Adam Pearson, who has been one of Darwen’s riders, said: “Darwen has been an utterly wonderful colleague – hard-working, good in all situations and brilliantly dependable.

“He will go out on his own and isn’t really fazed by large crowds. Because of his reliability he has worked all the major football matches in Lancashire, including a particularly volatile match in 2014 between Blackburn and Leeds. He faced down 400 angry fans, which was quite something!

“We’re all going to be so sad to see him go and it’s genuinely been an honour to work with him. However, he has had a long career with us here at Lancashire Police, and if anyone deserves a good rest now it’s Darwen.”

He will be collected and taken to the Horse Trust later today. The Trust offers a home of rest for retired horses who have served in the police, military or for charities that help people. If anyone would like to donate to the Trust they can do so here: http://orlo.uk/oE1VT