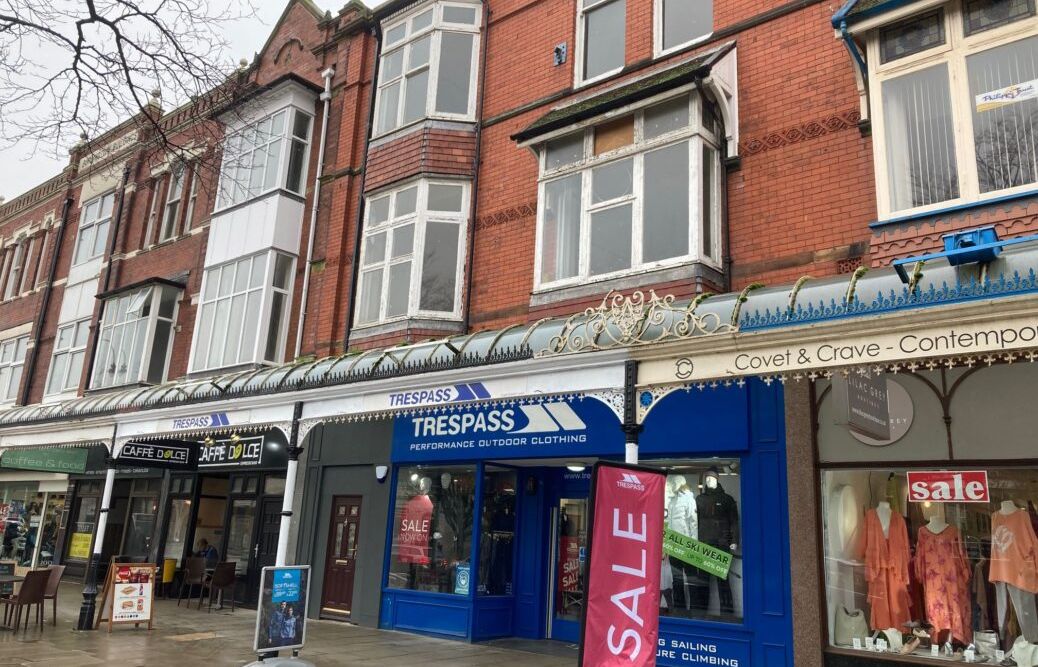 The upper floors of an historic building on Lord Street in Southport town centre could soon be converted into new apartments.

Paul Ennis Group in Southport has submitted revised plans to Sefton Council to convert the first and second storey at 413-415 Lord Street, above the Trespass outdoor clothing and camping shop, into two self-contained flats.

The development is part of a growing trend of utilising empty spaces on the upper storeys of buildings along the tree-lined shopping and dining boulevard.

The new developments are bringing more families into the town centre, providing more footfall for the businesses there, as well as meeting local needs for new housing.

The building was occupied during Victorian times by a branch of the Lancashire and Yorkshire Bank, which opened in 1893. It later became a Martins Bank branch in 1928, until it closed in 1934.

The ground floor was used as a retail unit until 1990 when it was changed to a restaurant, becoming a shop again in around 2015.

In their application to Sefton Council, Paul Ennis Group said: “The building is located on Lord Street within Southport town centre. It falls within the Lord Street Conservation area and although many of the historical buildings on Lord Street are Grade II Listed, this one is not.

“The building is currently used on the ground floor as a retail unit which was previously served by a small office and storage area on the upper floors. The ground floor has a typical retail fit out and the existing doorway leading to the upper floors from the front elevation has been removed. The first floor has seen some slight redecoration and the second floor is largely untouched.”

The firm has recognised a need for hundreds of new homes in Sefton every year under the council’s Local Plan, which it set out five years ago.

“It also states that there is an objective of 694 dwellings per annum to be provided and that allowing development and diversity of the ‘declining high street’ reduces requirements elsewhere whilst having a positive impact on the local area.

“The key takeaway from this part of the plan is that there is strong potential for positive development to the upper floors for residential use and that these developments should have no impact on existing living conditions, provide no harm on existing assets or street appearance, and they must take opportunities to repair and restore heritage assets.

“By developing these under-utilised and somewhat forgotten spaces, these historic buildings can be prevented from further deterioration.

“By forming new residential spaces, these buildings will be given a sustainable use, subsequently improving the area itself and adding to the diversity of Lord Street.”

The ground floor would largely remain as a retail unit, whilst the first and second floor would be converted to house new apartments.

There would be a central communal corridor which provides access to the main entrance and to the bin storage at the back of the property.