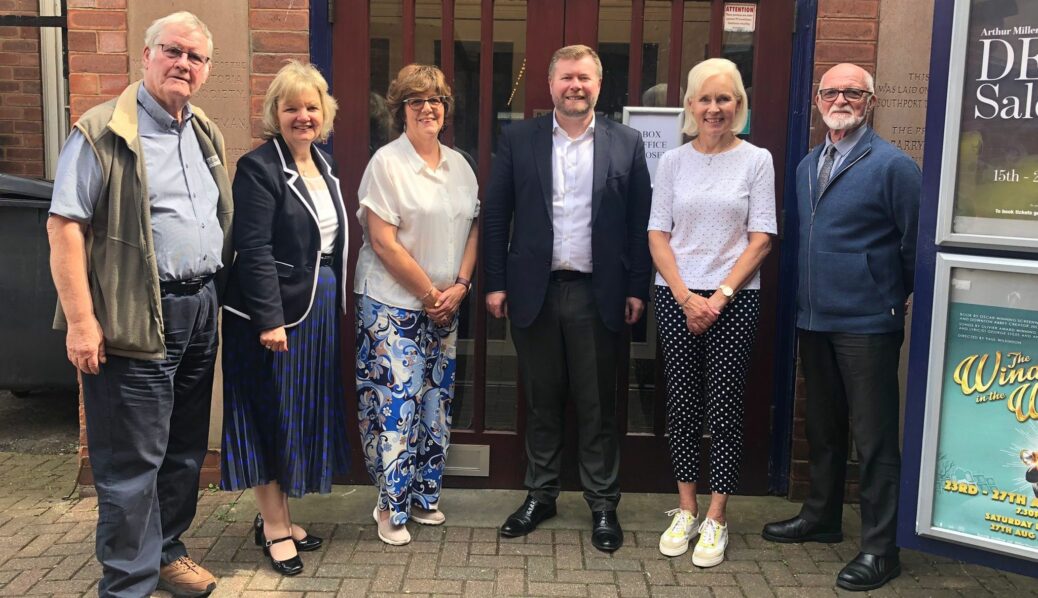 People are being urged to support the SDC and Southport Little Theatre with some exciting shows on the bill for this season.

Southport Dramatic Club has been entertaining audiences from around the region since 1920, although its immediate predecessor, the St. Andrews Old Girls Dramatic Society, had its first production in 1913.

The SDC moved into its permanent home of the Southport Little Theatre  in 1937.

Southport MP Damien Moore MP was delighted to visit the Little Theatre, where he met with members of the SDC in the middle of an exciting summer of popular performances for the group.

The visit was followed by his attendance at the opening show of ‘The Wind in the Willows’, which opened on Tuesday 23rd August and ran until Saturday 27th August.

This 400-seat theatre runs a variety of shows across the year, from the comedic ‘The Vicar of Dibley’ to the far more poignant ‘Death of a Salesman’, with many shows seeing several thousand visitors attend across their eight-night run.

Mr Moore was able to meet some of the trustees representing the Club’s many talented performers, backstage technicians, and volunteers, and learned about how their theatre is run.

He was particularly interested to learn that many members have been part of the group for several decades, and that for some families, participation runs across the generations, representing the deep roots that the Club has in Southport. The SDC reached its centenary in 2020.

Mr Moore was also given a tour of the theatre, much of which retains its original 1930s glamour but with a modern, functional twist, ensuring that customers and theatregoers are always well looked after by the friendly theatre volunteers.

Mr Moore discussed various issues with the trustees, including the effect of the pandemic on the SDC and its audiences, potential grants, and, following the addition of the cycle lanes along Hoghton Street, the impact these have had on the ease of access to the Little Theatre.

He described the opening performance of ‘The Wind in the Willows’ as “wonderful”, and praised the cast, crew, band, and all the volunteers involved. He is encouraging people across the town to buy tickets and show their support as well.

“It was fantastic to visit the Little Theatre and Southport Dramatic Club to meet with trustees and discuss the exciting projects being worked on. The Little Theatre is a real asset to our town, and I was pleased to return to view the opening performance of the ‘Wind in the Willows’.

“The trustees do a brilliant job of overseeing the theatre and club, as do all the volunteers who support their work. The ‘Wind in the Willows’ performance was wonderful, and I pay tribute to the hard work of the cast, crew, and band for making the evening so great.

“The sheer volume and breadth of their artistic ability is astounding, and it is evident from their talent just how greatly the Little Theatre has been delighting our town’s residents for over a hundred years.

“I would encourage all of our town’s residents to buy tickets and see one of their performances for themselves – they have my full recommendation!”