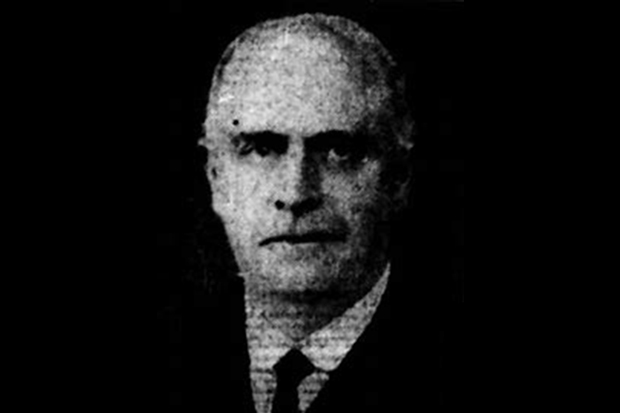 Notorious Southport wife killer Dr Robert Clements will be the subject of an online lecture organised by The Atkinson in Southport this week.

Southport was the focus of national headlines in 1947 when Dr Robert Clements, former Medical Officer of Health for Blackburn, took his own life in suspicious circumstances.

He had been suspected of the murder of each of his four wives and was also complicit in the suicide of a local pathologist.

Dr Tom Preston tells the shocking story of a scandalous episode from the austere years of post-war Southport.

The cost is £5 / free for members, plus booking fee £1 per ticket online/phone.

Born in Belfast in 1880, Dr Clements described himself as a proud Ulsterman.

Little is known of Dr Clements early life, only that he attended medical school at 18, graduating in 1904, gaining further qualifications in 1908 and then becoming a fellow of the Royal College of Surgeons in 1912 in Edinburgh.

He had a distinguished career, rising through the ranks of several medical professions and becoming chief medical officer for health in Blackburn during the Second World War, taking up the post when the regulars were called up to active service.

A friend told the Liverpool Echo in May 1947 that Dr Clements was “jovial and always ready for a joke” as well as being “one of the best friends you could ask for.” 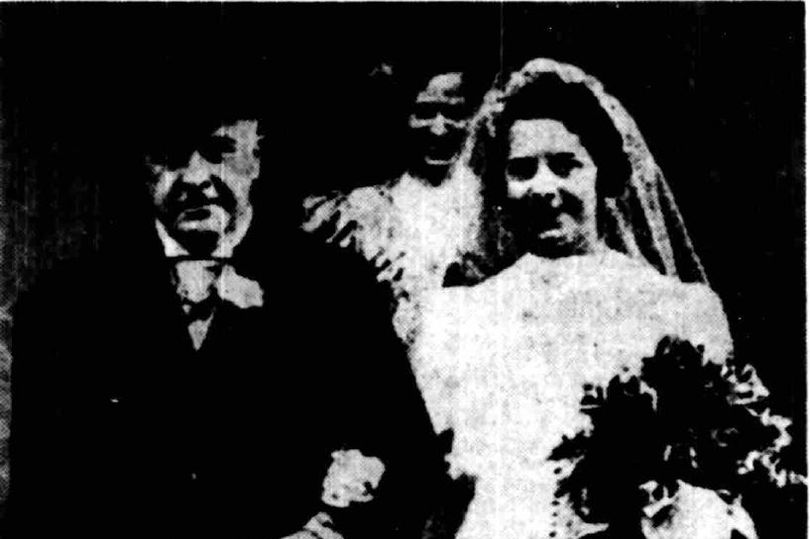 Dr Clements was a normal, rather intelligent family man and quite possibly a faithful husband.

In 1947, a friend of his told the Liverpool Echo that “he and his wife were a devoted couple. I don’t know of a more devoted couple in Southport.” The anonymous friend told the paper that every morning his wife would accompany Dr Clements as he got on the train and would meet him there as he came back.

But there was something decidedly more sinister about this doctor that didn’t quite look right and it came in the form of four women, all, at one point in their lives, called Mrs Clements.

Wife number one was Edith Anne Mercier, another proud unionist from Belfast who was active in a Ulster women’s unionist council and happened to be the daughter of a wealthy grain merchant called William Turpin Mercier.

He owned the illustrious Dufferin Flour and Meal Mills company and invented, and patented, a new method of bleaching and conditioning wheat, flour and cereals in 1903. He was rich as a result and his daughter was due to inherit that fortune.

In 1920 she died of a mysterious ‘sleeping sickness’ aged just 40. Sleeping sickness, also known as African Trypanosomiasis, is an insect-borne disease which can be passed on by an infected fly.  Dr Clements signed the death certificate.

Dr Clements remarried, this time to a much younger woman called Mary McCreary, the daughter of an industrialist who was based in Manchester, another woman who could inherit from a rich father. He moved to Moss Side in Manchester to join his wife.

She died suddenly in 1925, aged just 25, from endocarditis. A heart condition which can cause swelling of the organ and lead to heart failure, stroke or even kidney failure. She was cremated soon after, too soon for a post-mortem examination. Dr Clements once again signed the death certificate.

By this time Dr Clements was 45 and now in Southport, living in the Hydro mansion flats on Trafalgar Road in Birkdale. He married his third wife Sarah Kathleen Burke, known mostly by her middle name. She died on May 23 1939, with endocarditis once again blamed for the cause of death. 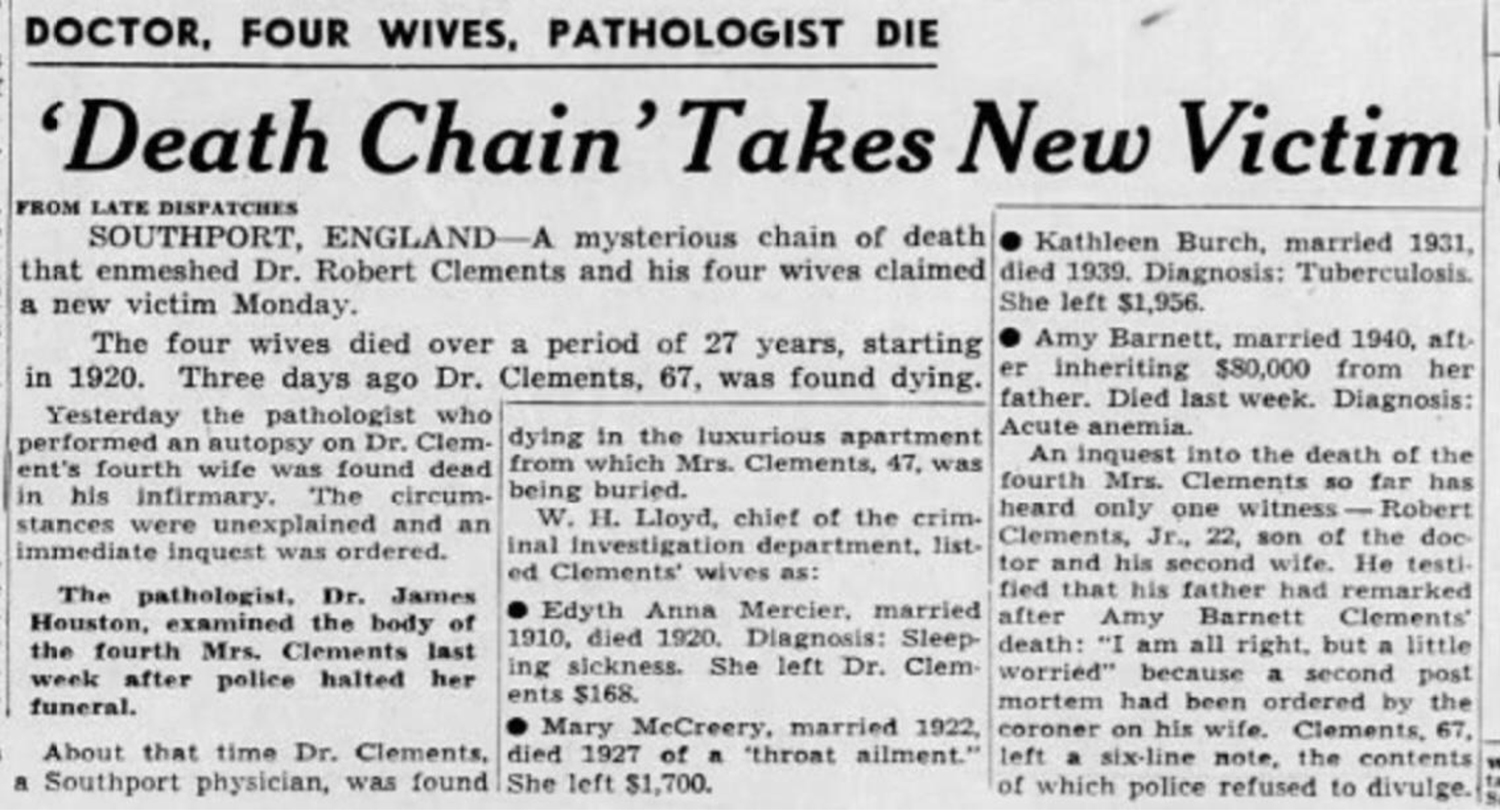 Dr Robert Clements, from Southport, was suspected of the murder of each of his four wives and was also complicit in the suicide of a local pathologist

According to historian Michael Newton, this death triggered suspicion from the authorities. A medical friend of Dr Clements persuaded the police that an autopsy was needed to determine the cause of death. They were never able to carry out the examination.

The late Mrs Clements’ body had been cremated, on the orders of her grieving husband, who, for the third time in his life, signed off the death certificate of his late wife.

It was around this time that he started working in Blackburn as the officer for public health and by June 1940 he had also remarried to his fourth wife, Amy Victoria Burnett, a woman very much in the Mrs Clements mould. Amy was the daughter of one of Dr Clements’ aged patients, Reginald W. G. Burnett, the wealthy managing director of the Liverpool Cartage Company, a haulage firm that continued to dominate city trade well into the 1960s.

As his physician, Dr Clements would have been well aware that Mr Burnett was in poor health in 1940 and his imminent death soon after Dr Clements’ wedding to Anne, left Anne grieving but very rich. A fourth heiress to marry the Belfast physician.

In May 1947, Dr Clements’ wife began to feel ill and collapsed. She was in a comatose state by the time her husband decided to take her to a nursing home on May 25 and she died within 31 hours of arriving at Astley Bank Nursing Home in Southport. There was a discrepancy over her cause of death and the police began investigating.

Dr Clements’ 47-year-old wife had started having dizzy spells before she died, spells that her husband seemed to be aware of before she was.

A prominent Lancashire pathologist, Dr. James Houston, accepted Clements’ conclusion that the cause of death had been myeloid leukemia, but an independent examiner noted signs of morphine poisoning in Mrs Clements’ body. Police also found out that Dr Clements had prescribed large amounts of morphine to a patient who never received the dose.

They found both doctors dead, with suicide notes beside them, the first giving himself a large hit of morphine and the other taking a cyanide capsule. An inquest was called into all the deaths as well as the discrepancies around the late Mrs Clements.

It was due to be the day of her funeral but the proceedings were halted by police and her body taken for further tests.

The results showed that Mrs Clements had succumbed to morphine poisoning.

Coroner, Mr C Bolton, continued to meticulously work through the case over the next month and its result became one of fascination to locals. People queued up to get into the inquests which were well attended.

Sordid details, concerning all three of Dr Clements’ marriages began to come to light. Namely the issue of wills and the money he inherited after each one passed away.

On Friday, June 27, the jury deliberated for 50 minutes before concluding unanimously that Dr Clements had murdered his wife, that he had then committed suicide to avoid detection and Dr Houston had, tragically, taken his own life because of the shame he felt. The physician had, almost, aided Dr Clements in getting away with murder, almost helped him cover his tracks.

His suicide note simply read: “I have for some time been aware that I have been making mistakes. I have not profited from experience.”

The Bluebeard killer had ended the lives of four people and caused another to take his own. Whilst he killed his wives and acted as a sly and avaricious husband, he cruelly caused another man to kill himself, leaving another wife alone.