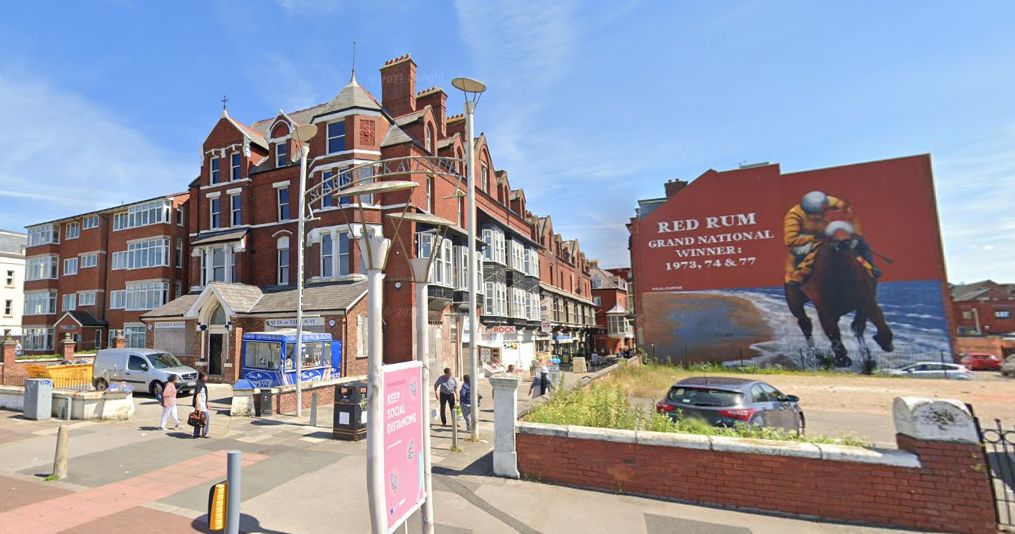 One of the key regeneration sites in Southport is hoping to gain planning permission in the coming weeks.

22 Promenade, on the corner of the Promenade and Scarisbrick Avenue, is a vital building linking Southport town centre and the seafront.

The historic former hotel has been vacant and derelict for the past 17 years.

But now its owner has revealed significant ambition to bring the double fronted four storey period building back to life, revitalising the street and helping to attract further private investment into an area which Sefton Council is keen to see improve.

The local authority is currently leading a £1 million transformation of Scarisbrick Avenue, which it hopes will encourage more visitors to pass through as well as attracting more businesses.

Two years ago, Sefton Council commissioned acclaimed street artist Paul Curtis to paint an impressive four-storey Red Rum mural on the gable end of a building on Scarisbrick Avenue, next to 22 Promenade, as one of the highlights of its Sefton Borough of Culture year..

The £1 million conversion of the former Continental Hotel and licensed restaurant into nine self-contained apartments on the upper floor with a new restaurant to the ground floor would further re-energise a previously neglected sector of Southport town centre.

It would add to further regeneration work taking place in the town, with the first two phases of The Grand on Lord Street opening earlier this year, work taking place at the former Garrick Theatre and a full planning application submitted by Sefton Council this summer for the £73 million Marine Lake Events Centre.

Rod Ainsworth Architect in Southport is creating the design work to breathe new life into 22 Promenade which would add to the resort’s new-found resurgence.

He said: “We need to see the benefits of bringing this magnificent building back into use. If we don’t, then we could see it being knocked down, which would be a great shame.

“This is a key building in the regeneration of Southport, by bringing back a Grade II Listed building to life.

“The owner is a local businessman who has several properties in Southport, including on Lord Street, and is invested in seeing the town do well.

“They have already invested a quarter of a million pounds in carrying out urgent repairs to 22 The Promenade so are very committed to this project.”

Planning permission for the conversion of the building, in a much bigger scheme which included 10 two bedroom residential flats, was initially granted in 2008, but has since lapsed.

The Continental Hotel closed its doors in 2005 and its absence has been much missed.

The 2021 Historic England Heritage At Risk Register described the Promenade in Southport as being in ‘Very Bad’ condition with a ‘Medium’ level of vulnerability and there is much work to be done to change that rating.

Discussions have taken place with Sefton Council’s planners as they are concerned that insufficient outdoor private amenity space has been provided within the scheme, which could result in the planning consent being refused.

Rod Ainsworth said that due to the restricted nature of the site, there is only a small amount of land at the rear of the building available for a private garden.

His view is the residents living there couldn’t be in a better location.

They would have easy access to the beautiful Kings Gardens, which includes an adventure playground, the model railway village, a miniature railway, a crazy golf course and more besides, which more than compensates for the shortfall in the amenity space within the scheme.

Rod Ainsworth said: “22 Promenade has been vacant for a very long time now, and we need to bring it back.

“Bringing people to live in the town centre will help to support local businesses and will also encourage further private investment in a neglected area.

“Granting this scheme would liven up Scarisbrick Avenue and the Promenade, bringing more people going to and fro between the town centre and the seafront.

“There are lots of vacant shops on Scarisbrick Avenue at the moment but reviving this building would bring a real vitality back to the street.”

The scheme is part of a growing trend of attracting more people to live and work in Southport town centre.

Earlier this year Sefton Council supported the creation of nine new apartments on the upper floors of 150 Lord Street, on the corner of Lord Street and Bold Street, through Southport Townscape Heritage funding.

It is a method that has been seen to work in places like Liverpool city centre in providing a huge boost to the local economy, both during the day as well as at night.

“If you create more apartments above restaurants and shops in Southport town centre, then more people will be in the area to directly support the local businesses that exist there and to allow them to flourish.

“Granting this planning application would be a great example to owners of other vacant properties in Southport town centre that they can progress with schemes that will bring new vitality and huge benefits to the area.”

In October last year, Sefton Council announced a £1million plan to revamp Scarisbrick Avenue, a hub of Southport nightlife and home to other businesses including cafes, takeaways and an award-winning fish and chip restaurant.

The route is home to independent local businesses including Avenue, Spender’s, Chop House, the Dolphin Chippy, Hideaway, Concept Food Bar and others, in addition to the side of The Scarisbrick Hotel.

It is hoped the scheme will greatly improve the popular walkway, which connects the heart of Southport town centre with the Promenade and seafront, complementing the ongoing work of Southport Town Deal and the Southport Townscape Heritage Project.

A total of £920,000 has been allocated for the project via the Government’s Highways Challenge Fund grant and Sefton’s Growth Programme.