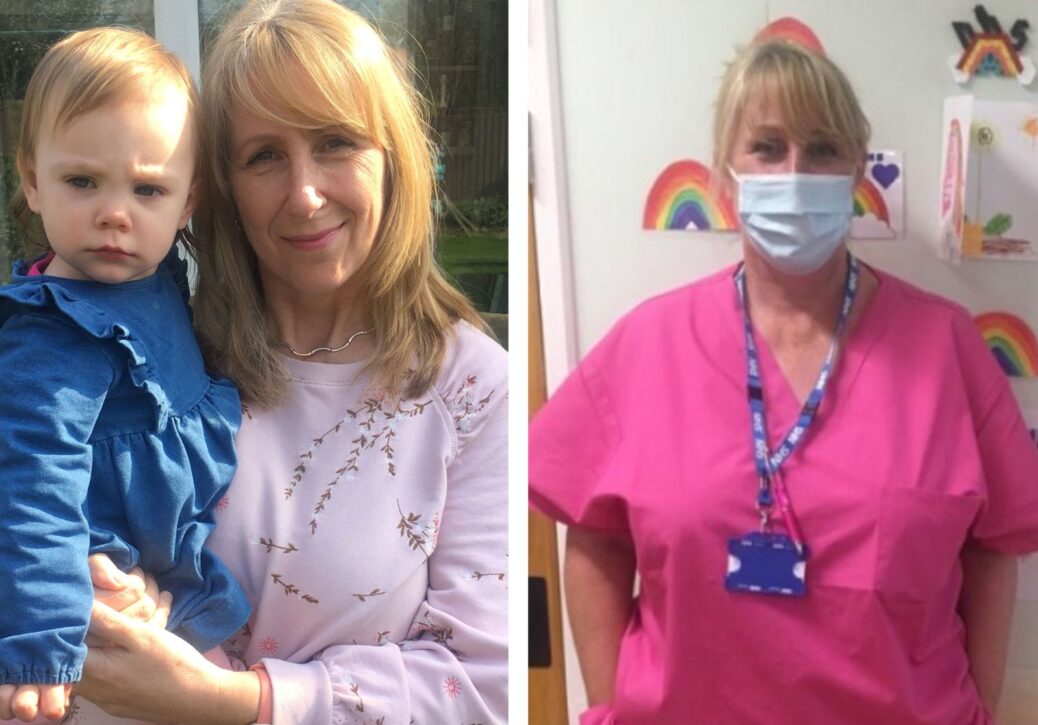 A healthcare assistant from Southport says she is enjoying being fitter and having more energy to play with her grandchildren, after losing more than five stone in weight since joining Slimming World.

Mother of three, Rachael Halstead was reluctant to join her local group, Slimming World Southport with Dee, after confiding in a friend that she was keen to change her lifestyle and start shedding some pounds.

Joining the group was one of the best decisions she made after plummeting from over 16 stone in May last year to 10 stone 13 pounds now.

Rachael, who lives in Marshside in Southport, has achieved her impressive transformation through changing her mindset towards eating, ditching unhealthy snacks and getting on track with delicious meal plans tailored through Slimming World.

She says she has noticed huge changes to her lifestyle, easing back pain and hip pain that she had previously suffered, giving her far more energy to play with her grandchildren, and even inspiring her to join a Nordic walking group.

Rachael, 54, was working as a healthcare assistant in the maternity unit at Ormskirk Hospital last summer with friend Bev Brooks when the subject of Slimming World came up.

“I was a little reluctant to come to Slimming World,” said Rachael.

“I was at work with Bev, and we were talking about Bev’s weight loss. I said that I needed to lose weight and Bev said, ‘I’ll book you in for Friday with me’.

“When Friday came, I was still unsure about going  and nearly didn’t go, but I knew that I needed to do something to lose weight. I think that you have to be in the right frame of mind, and you have to want to do it for Slimming World to work.

“When I sat and listened to the welcome talk with Consultant Dee Wright, I just thought to myself, ‘I can do this’. Dee really gave me the encouragement and confidence to get on track. 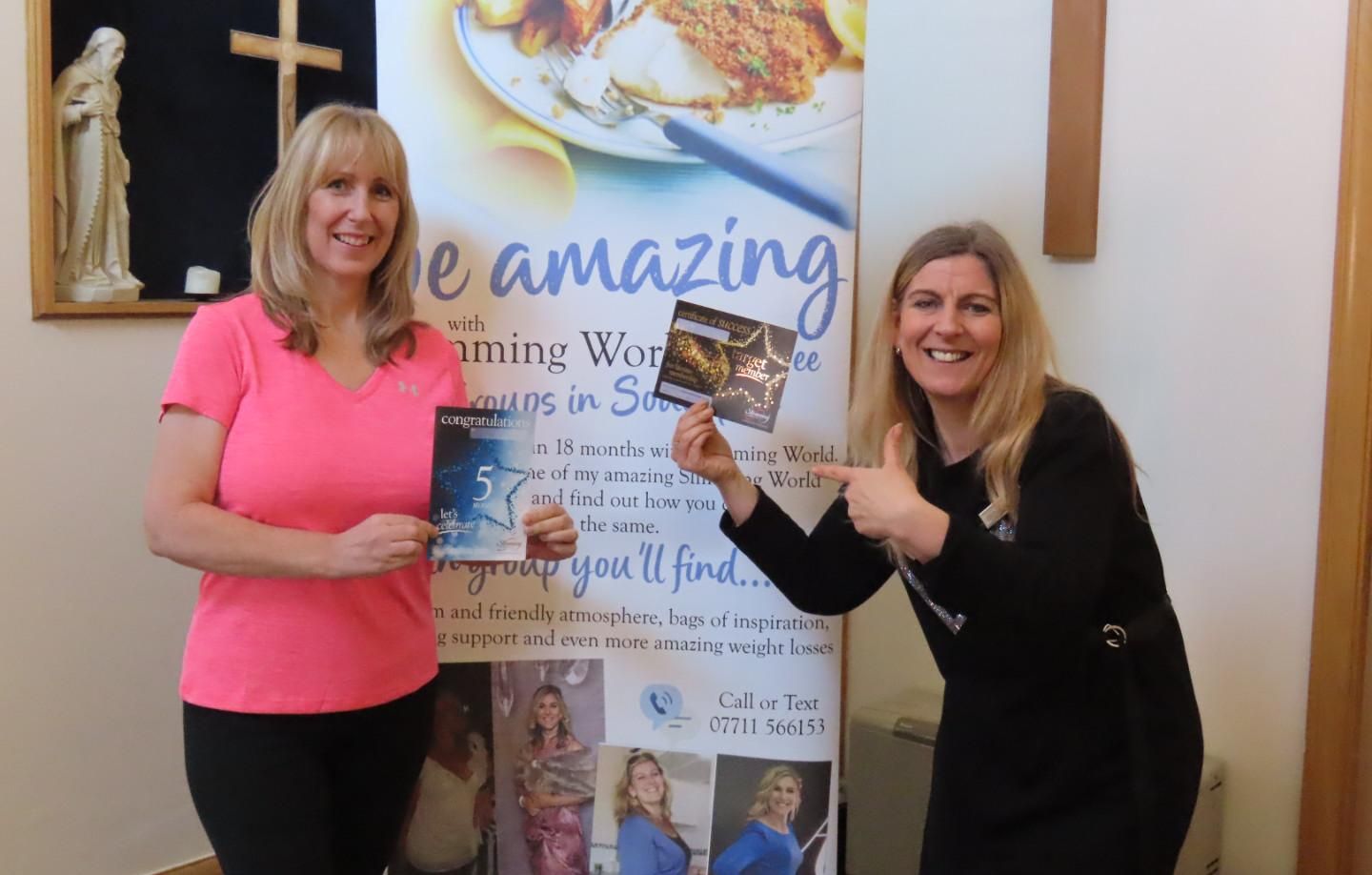 “Since that day I haven’t found it difficult at all. The Slimming World eating plan is quite easy to follow even when eating out.”

Slimming World has had positive benefits for others in Rachael’s family too.

She said: “My husband, Ralph, has been eating the same as me and joined the gym and has also lost over four stone so far!

“It has been a complete lifestyle change for both of us.

“When I look back now, I am horrified at what we used to eat and drink.

“I have a sweet tooth and would eat whole bags of Haribo sweets. We were drinking alcohol and snacking most evenings. And when you drink alcohol, you tend to snack as well.

“We even had a ‘naughty drawer’ full of sweets and snacks. 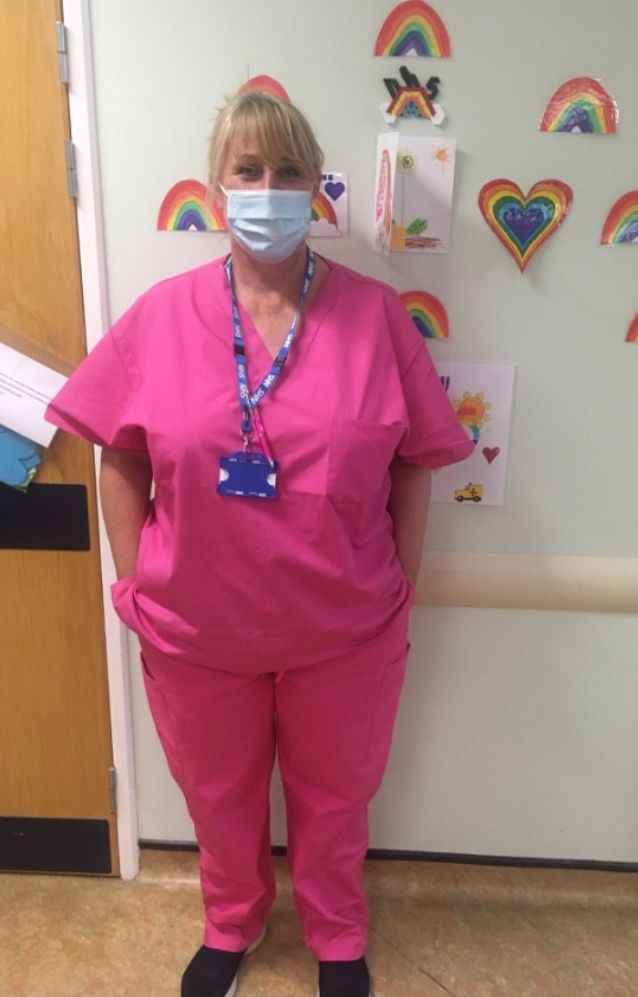 Rachael Halstead from Southport before she lost weight with Slimming World

“Our portion sizes have changed as well.

“My son Luke came to stay for a while, so I was cooking for three people, but when Luke left I was making the same amount but we were eating it between the two of us!

“We are both exercising a lot more now. We are walking the dog a lot more often and have joined a Nordic walking group in Banks.

“Meals have changed too. We are eating lots of fruit and veg, eating lean meat and making changes to how I cook. What we are eating now is far tastier and healthier than before. We have just stuck to the Slimming World plan, and cut right back on snacking and alcohol.”

After shedding over a third of her body weight, Rachael is now noticing huge changes to her everyday life. 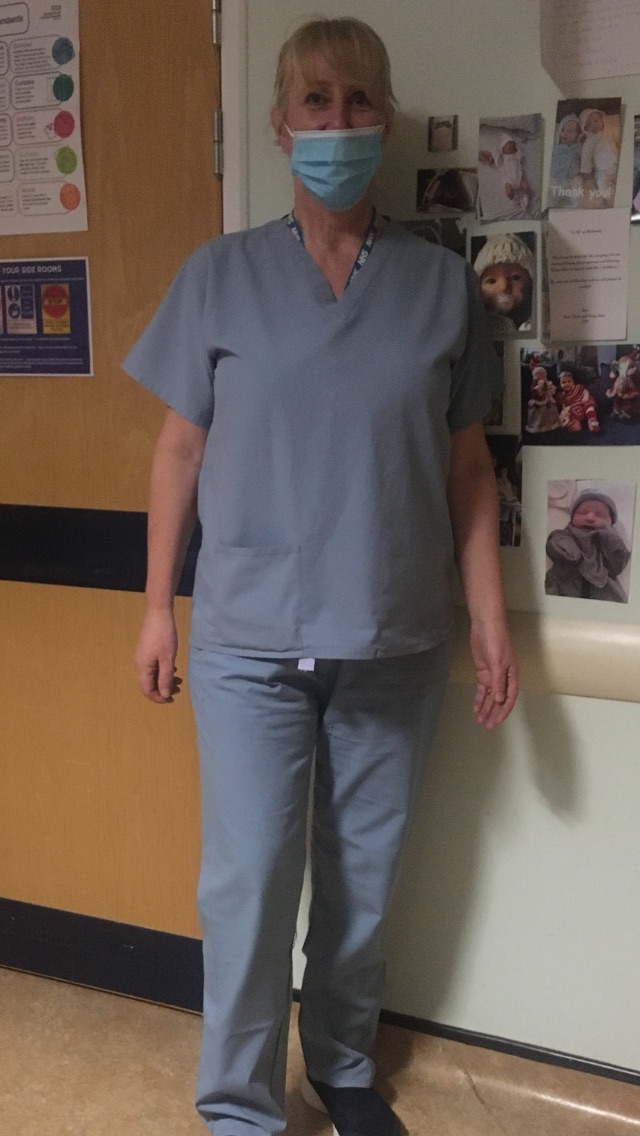 She said: “I would get out of breath really easily and had back pain and hip pain. Not any more. Carrying extra weight has a huge impact on your joints.”

Rachael has some important advice for anyone who wants to lose weight but might be unsure about joining Slimming World –  just as she was last year.

“Walking through the doors for the first time is the hardest thing,” she said.

“But it could be the best decision that you could make. Last year, I knew I needed to lose weight, and the push from Bev was just what I needed. I am so glad now that she did!

“I have six grandchildren between 20 months and 14 years old. I look after my granddaughter Amelia every week and I feel so much fitter and have more energy when I am looking after her.

“I am so glad that I joined Slimming World and made that change. The health benefits are endless as well.

“Because I had a lot of weight to lose it felt impossible at first but I broke it down into seven pound losses. I never looked further than the next seven pounds.

“When I had achieved that, I would move onto the next seven pounds untill I reached my target in February this year.

“I love Dee’s group on a Friday morning and I think it is the best group for miles. It is about taking that one hour for yourself each week.

“I think Dee is an absolutely brilliant Consultant. She is a slimmer, just like everyone else in the room, and wants every single person in the room to succeed. Every week is interesting and I have gained friends through the group.

“I couldn’t have done it without being part of her group. Her positivity and energy is amazing!”

Southport Slimming World Consultant Dee Wright said: “What Rachael Halstead has achieved is truly inspiring and our group, and I, are very proud of her.

“When she joined us last May, booking was needed due to Covid restrictions. Thankfully that’s no longer required now and members can just come along to a group. Bev gave her the gentle push she needed to walk through the doors to our group! She’s absolutely focused on her goal and making her health a priority!

“It’s often difficult to lose weight alone and being in our group really encourages mindset and motivation.

“Slimming World has 53 years in the psychology of slimming. It’s at the heart of everything including our plan and our support!

“Changing habits built up over time or a lifetime in some cases isn’t always easy to do. 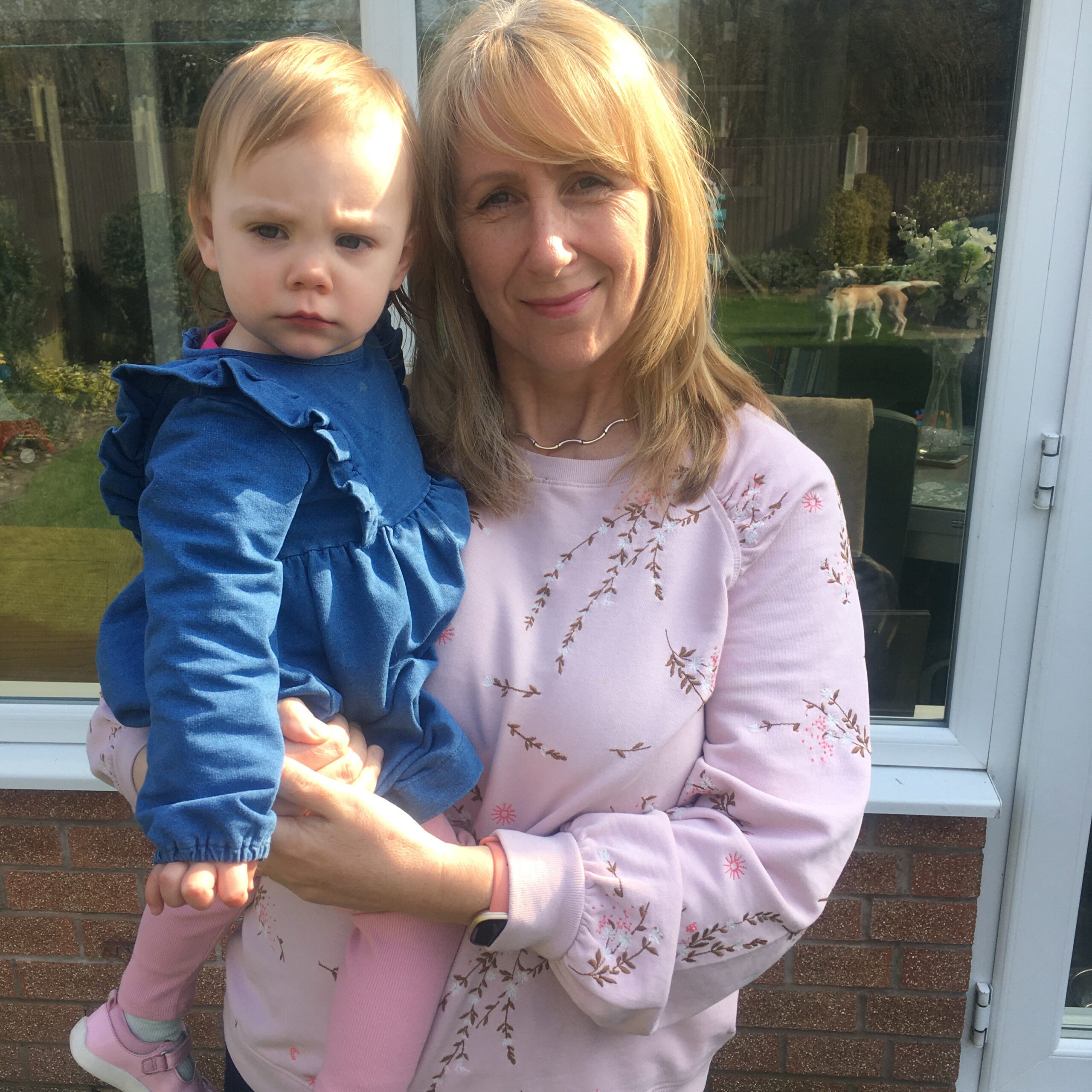 “Research shows that members who regularly attend a group are much more likely to lose weight! This is definitely true in Rachael’s case. In 40 weeks she lost over five stone, she attended 37 group sessions making that important time for herself and her weight loss journey.

“Group sessions, which include IMAGE therapy, which stands for Individual Motivational and Group Experience, are filled with support, recipe ideas, motivation and encouragement from the group members and me, we are in it together.

“Awarding Rachael her target award was an absolute honour. Over the last two years healthcare roles have been very difficult and challenging and the long hours, stress and tiredness have often impacted on eating habits and sleep habits too!  It’s been so lovely to hear of her increased energy levels, improved breathing and being free of the pain being overweight brings!

“Our food optimising plan means you can eat to satisfy your appetite from many foods and our groups are safe and non judgemental places for members to get help and support.

“We are open and here to help our community lose weight and gain better health. My groups are held at St Simon and St Judes church  on Old Park Lane, Southport PR9 7BQ on Thursdays at 9.30am, 5.30pm and 7pm and on Fridays at 9.30am and 11am. There are other groups on different days and times too.

“Congratulations to Rachael, the transformation is incredible and thanks to Bev for helping her make that valuable start.”