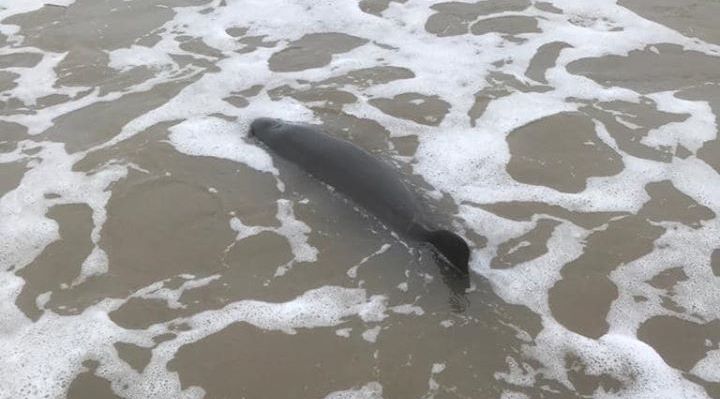 Southport Lifeboat and Southport Coastguard teamed up tonight to help to rescue a stranded porpoise which had become stranded on the beach at Southport.

The crews were called out at 5.36pm to an area around Weld Road at Birkdale.

Southport Coastguard said: “HM Coastguard Southport were paged to assist in the rescue of a stranded porpoise off Weld Road, Southport beach.

“The team donned full water rescue gear and headed out towards the tide. Southport Lifeboat and quads were requested to assist.

“The team, along with the Southport Lifeboat crew, were able to guide the dolphin back out to the safety of the open water. Marine Life Rescue personnel headed out with Southport ILB to make sure the confirmed ‘porpoise’ was safe however they were unable to locate it so we all hope now that it had swam back out.

“Thanks to all for a great turnout and to the first informant who originally assisted the porpoise and called for emergency services.

“A great multi-team tasking with a happy outcome.”

A Southport Lifeboat spokesman said: “Earlier today, our crew were asked to help a porpoise that was in difficulty in the surf near Weld Road.

“The crew met with the first informant who had been monitoring the mammal in the shallow water whilst the team arrived.

“The crew entered the water and ushered the porpoise towards deeper water as it had no obvious sign of injury.

“On the second attempt, the porpoise swam off back out to sea having found its bearings in the deeper water.

“The Inshore Lifeboat along with members of Marine Life Rescue tried to follow the porpoise but could not locate it.

“It is believed that it returned out to sea safely.