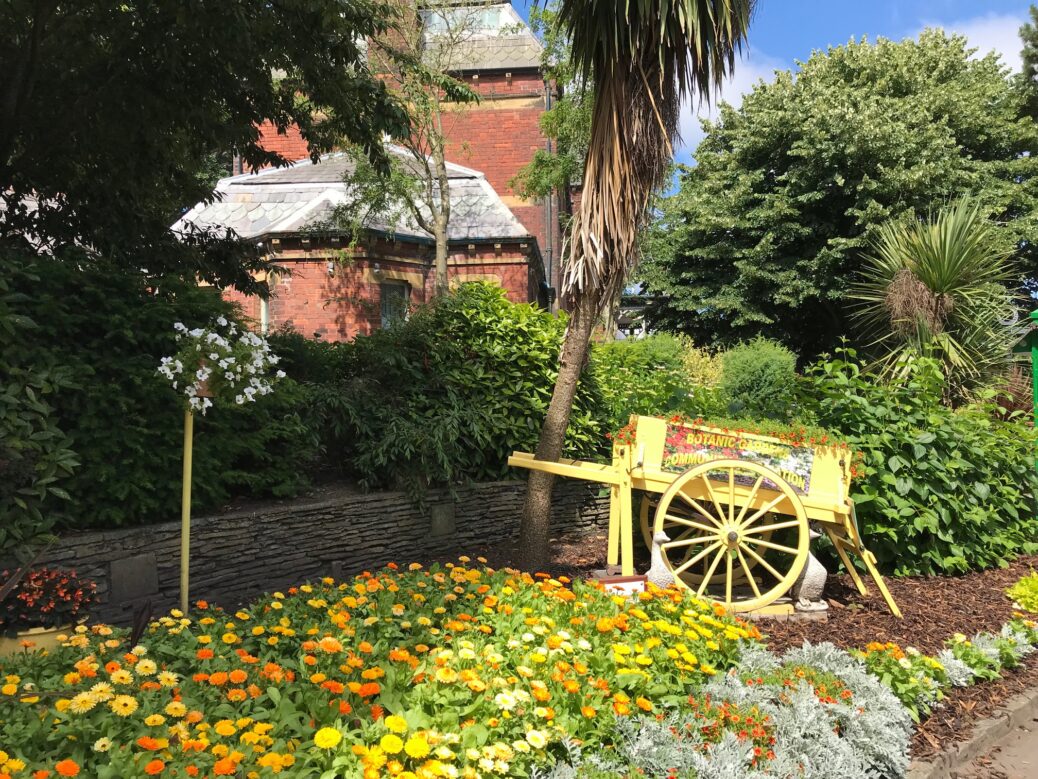 It’s time we gave a huge round of applause to the volunteers at the Botanic Gardens in Churchtown in Southport, as they finally begin to celebrate the hope of sunnier days ahead.

These incredible people stepped in to ensure that this historic Grade II Listed park remained a place for families to enjoy when austerity kicked in a decade ago leading to seven gardeners losing their jobs and the Botanic Gardens Museum being shut.

One of the jewels of the North West first opened to visitors in 1874 and has been enjoyed by millions of people since.

The volunteers wanted to make sure it could delight future generations too.

They have committed tens of thousands of hours since then into keeping it looking blooming brilliant, as they waited for the cavalry to arrive.

Hope now lies ahead. Sefton Council has given its backing to developing a new major development scheme for Botanic Gardens and to begin exploring possible funding streams, with a figure of £5million being suggested. 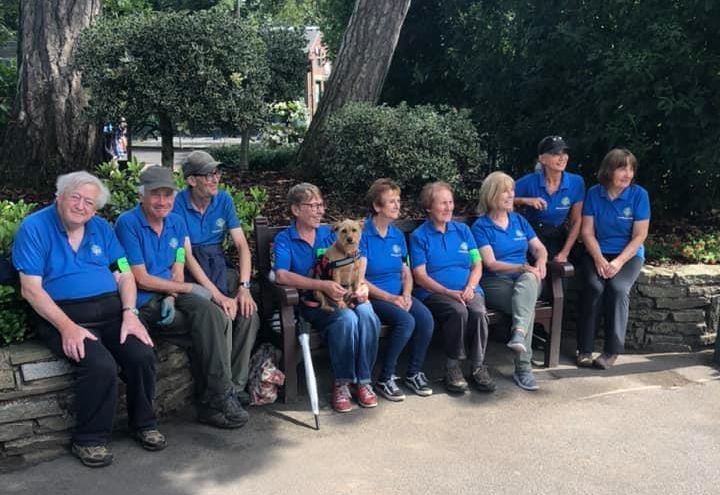 Volunteers at Botanic Gardens in Churchtown in Southport

Officers will now work with the volunteers from the Botanic Gardens Community Association and others to make their ‘vision’ become a reality.

They say a number of possibilities exist: The historic Botanic Gardens Museum could become  a new hotel and wedding venue; boating could return to the lake; a new cafe could open on the northern edge. Other new attractions could include: a Victorian carousel, heritage fairground attractions, butterfly house, cactus house, and a destination scale play area attraction and high ropes course. Cleaning the lake and restoring the park’s infrastructure is urgently needed.

Botanic Gardens Community Association Chair David Cobham said: “We had an inkling that this was going to happen. It is great news.

“We are delighted to see them now talking about finally putting some money into the Botanic Gardens, which hasn’t happened for 20 years.

“It is a much-loved place. The Botanic Gardens is a massive part of Southport’s heritage.” 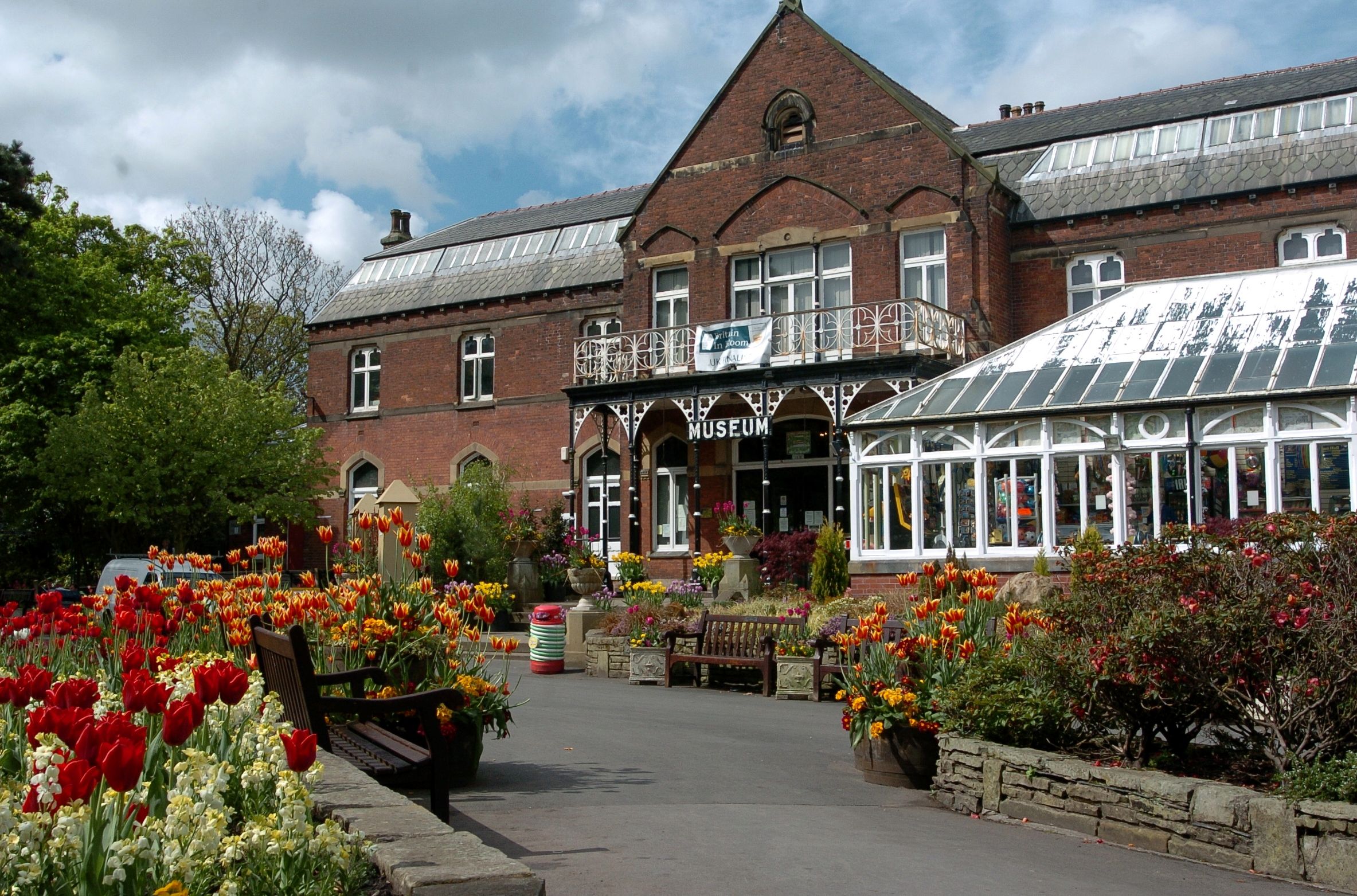 The Botanic Gardens Museum and cafe in Churchtown, Southport. Photo by Barrie Mills

David and Ann Cobham and the other volunteers stepped in to carry out essential maintenance at the Botanic Gardens back in 2011 when Sefton axed four full-time gardening staff, including Nursery Manager Alan Foxall.

They closed the Botanic Gardens Museum in the same year, as part of a huge austerity drive in Sefton and across the UK following the banking crash in 2008.

A further three Botanic Gardens gardening staff were made redundant in 2015. The volunteers now work with the much-depleted Green Sefton team, which is deployed to parks and greenspaces across the borough.

In the decade since 2011, the volunteers have given blood, sweat and tears into ensuring that the park looks stunning for families and visitors of all ages – their efforts recognised by their Outstanding Awards in the Britain in Bloom Awards in recent years. 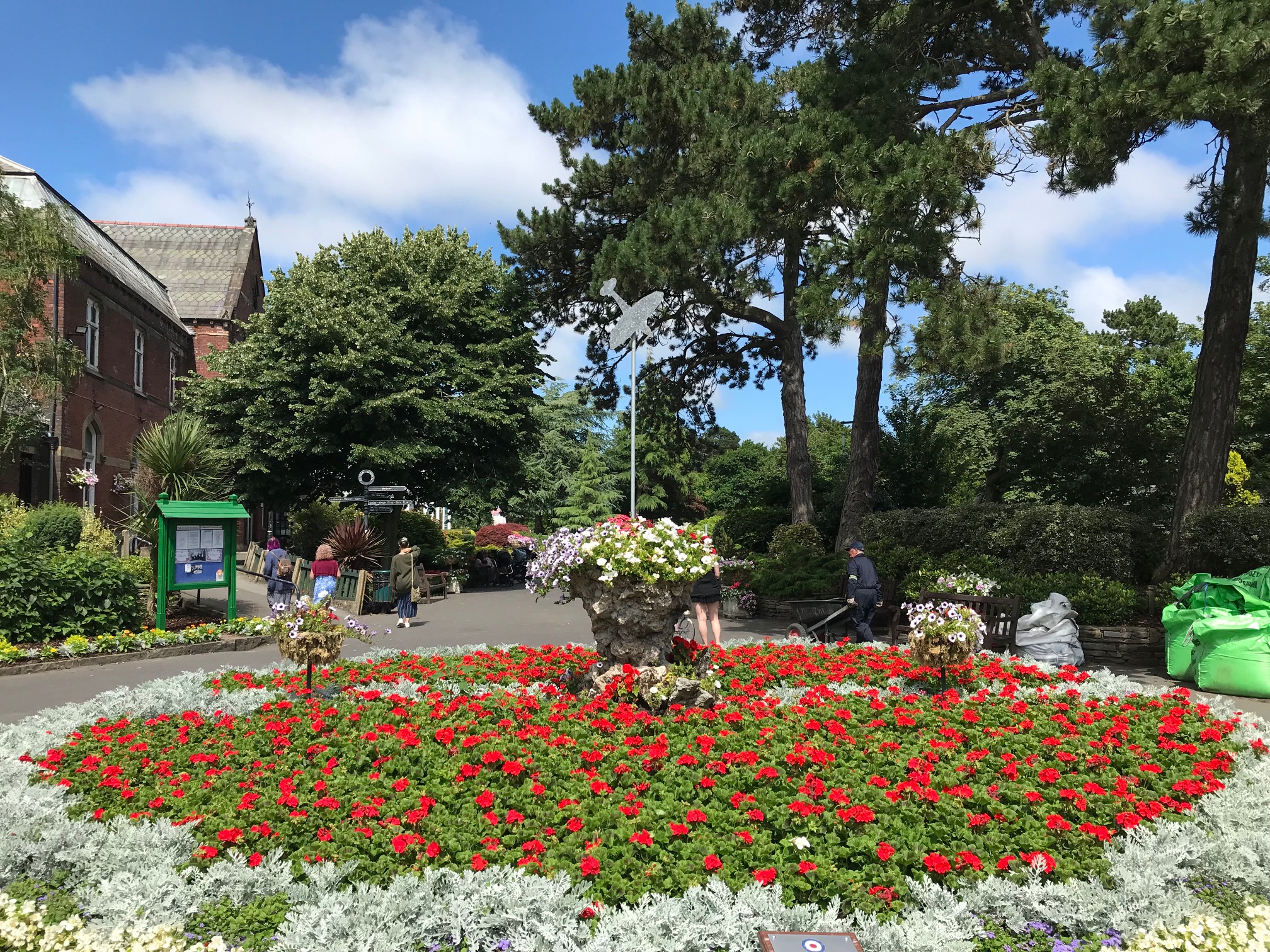 The floral tribute to the RAF at Botanic Gardens in Churchtown in Southport. Photo by Andrew Brown Media

They have planted flowers and shrubs; secured sponsorship to pay for them; carried out weeding and littering; kept the toilets open and running; kept the fernery open; organised events such as the annual Victorian Gala and brass band Sundays; and carried out 101 other jobs in between. They have saved the Aviary by raising money to support the running costs and pay for major renovations and provide some staffing.

During the past 10 years they have campaigned vehemently for urgent funding and for gardening staff to be restored.

They have also called for vital infrastructure work to be carried out.

They submitted a plea for support into the Southport Town Deal process last year, but were unsuccessful. Sefton Council is now pursuing other streams of funding.

The investment cannot come soon enough for an incredible group of volunteers who deserve their day in the sun, sitting back and enjoying the park’s delights instead of being outdoors toiling in all weathers.

David Cobham said: “We all agreed to become volunteers and to help the council to maintain the park a decade ago.

“Rather than sit around and moan about what was happening, we thought let’s do all we can to keep it going, until they can afford to put some money back into it again.

“We all love the Botanic Gardens. None of us wanted to see it fall into disrepair. Since then, the Gardens have lost more staff, and more work has fallen on our shoulders.

“The volunteers have been managing the flower beds, the aviary, the fernery, the toilets, and much more.

“We have been working here now for 10 years, since austerity came in.

“Ann and I are 78 now! We have been here a very long time. We have a real vested interest in 10 years of our time in seeing what happens next.

Birds at The Aviary at Botanic Gardens in Churchtown in Southport. Photo by Andrew Brown Media

“They say it could take three or four years for all this to happen. We are very keen for them to get going.

“We were disappointed not to get some money through the Southport Town Deal. Just 1% of the £38.5million they received would have done a lot, maybe allowing us to repair the bridges or to have the lake cleaned out, just like Hesketh Park was. We also want to see aerating water features to improve the lake.

“We feel the lake and it’s infrastructure is urgent for attention for health, safety and visitor attraction reasons.

“A lot needs doing with drainage at the park too. The pathways are crumbling.

“Another big one is what to do with the old Botanic Gardens Museum building.

“One idea over the years was to restore it to becoming a museum again – people really miss it – that celebrates a lot of things about Southport’s history. I know there is a museum at The Atkinson now, but that looks at the history of Sefton as a whole and includes exhibits from places like Bootle and Aintree.

“We thought maybe the building could become a North Meols Victorian Heritage Centre, where people could learn all about the history of this area, with places such as Churchtown, Marshside, Crossens and Banks, and to create a visitor centre for the park. 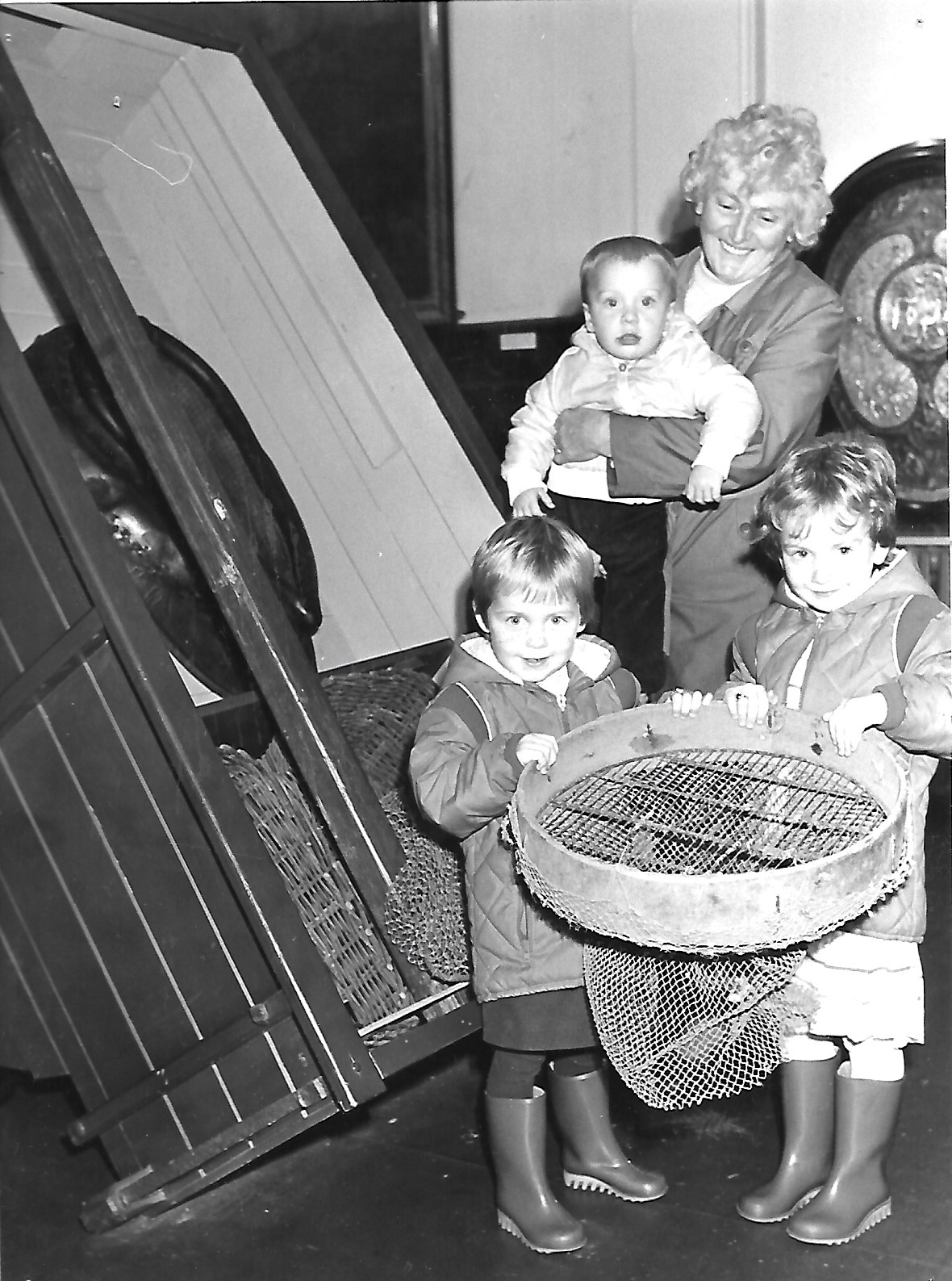 This Marshside family enjoys a day out at the Botanic Gardens Museum in Churchtown in Southport in October 1984. Pictures are: Evelyn, Elizabeth and Mike Turner, with grandmother Mrs P. Russell

“But lots more is needed, some to bring sustainable income in which has been stated.

“The volunteers will help in every way we can to bring this on.

“We have been campaigning over 10 years for the much needed renovation and restoration of our great Botanic Gardens.”

In his report to councillors, Sefton Council’s Head of Locality Services wrote: “There is significant potential in the Botanic Gardens site for investment to repurpose buildings and facilities to provide improved visitor attractions and facilities and generate income to help the park become self-sustaining.

“The long-term Vision for the park is to restore Botanic Gardens into a high-quality tourist destination attraction for Southport.”