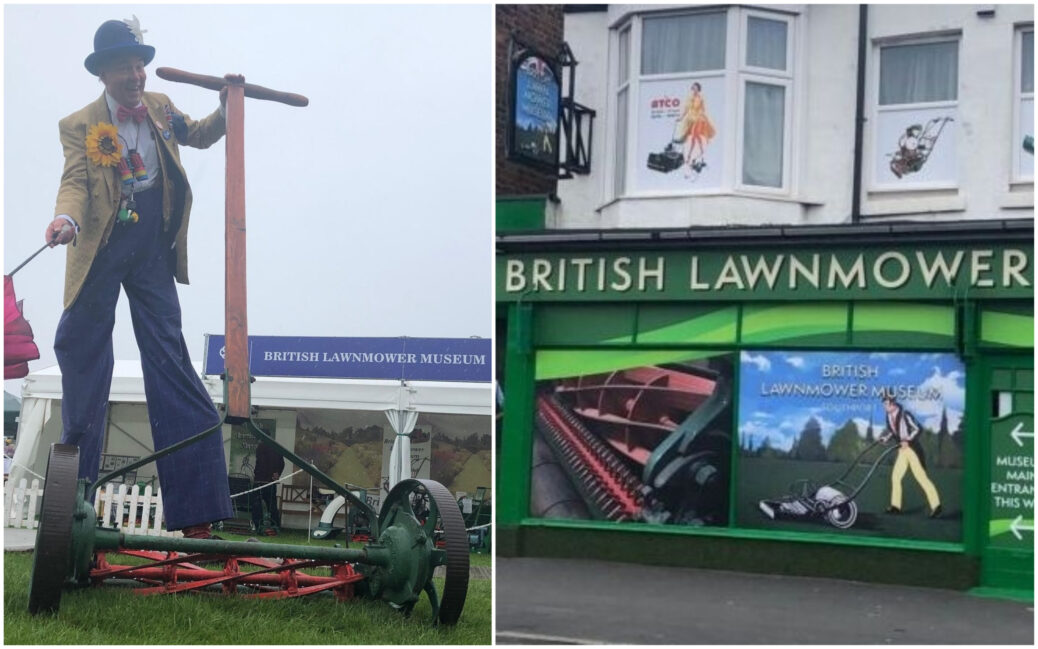 The world’s biggest hand-powered lawnmower is wowing visitors at its home in a truly unique museum.

The 90-year-old attraction stands at over 7ft tall, and dwarfs people who go to see it at the British Lawnmower Museum in Southport.

Not surprisingly it takes several people to operate it!

The machine is among dozens of lawnmowers on display at the venue, with several donated by celebrities including Queen guitarist Brian May, Coronation Street legend Jean Alexander, hangman Albert Pierrepoint and TV presenter Paul O’Grady.

British Lawnmower Museum Curator Brian Radam said: “The museum’s and the world’s biggest hand-powered mower is made from cast iron and cuts a 40 inch swaithe.

“It requires several willing bodies, ideally with abs to die for to operate it!

“Albeit it originally would have been pulled by a horse or tractor. 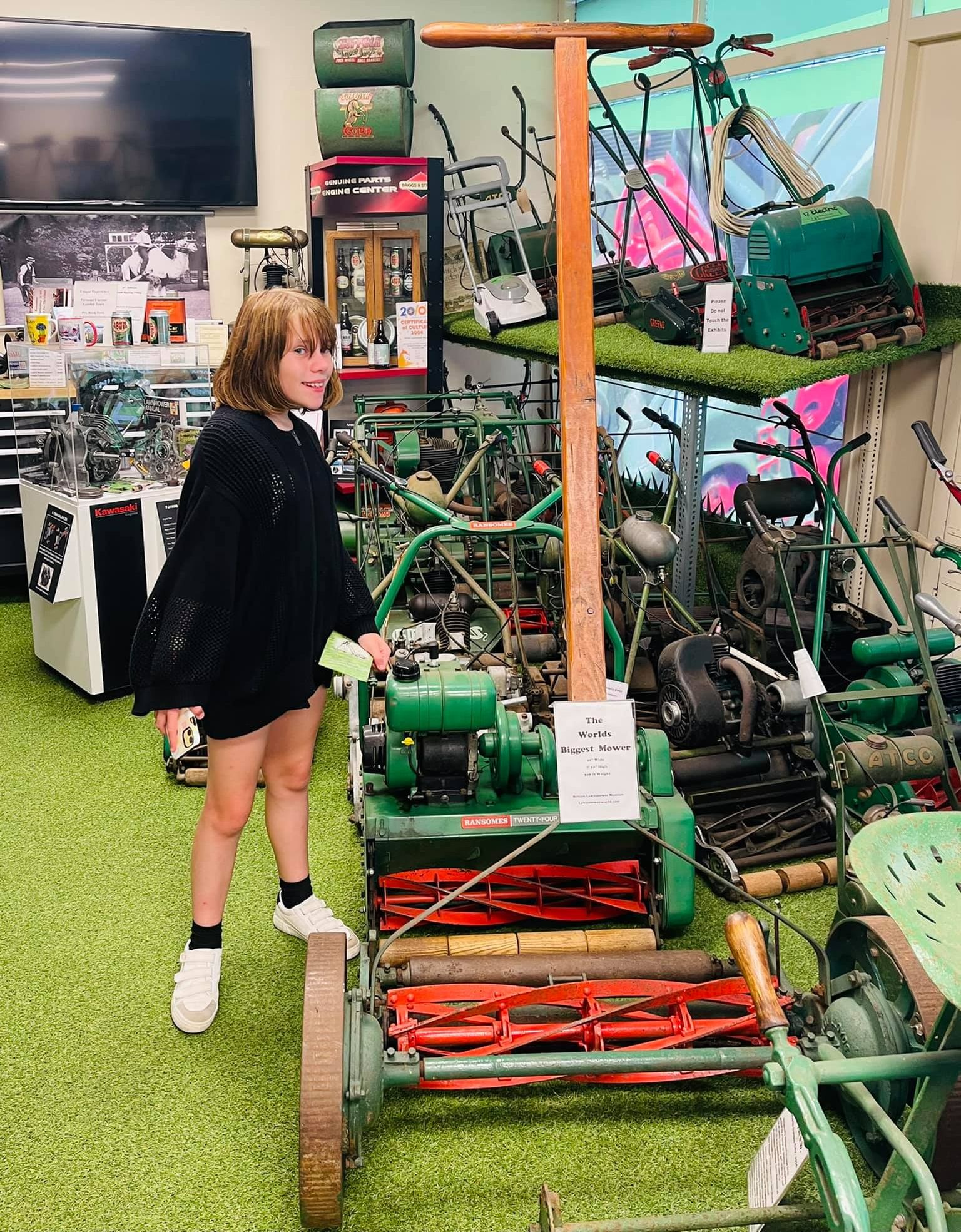 The world’s largest lawnmower, one of the many exhibits at the British Lawnmower Museum in Southport

The giant lawnmower is one of the oldest exhibits on display.

Brian Radam said: “The mower is 90 years old from the 1930s. It was originally manufactured by Lloyds of Letchworth, which was founded in 1878 and is one of the very few British manufactures still left producing mowers today.

“In those days, pre the petrol engine invention, machines were powered by men, donkeys, ponies, horses, camels and elephants.

“A camel in particular was very popular as they did not leave hoof prints in people’s pristine lawns.

“Most other animals were shod with leather boots for that purpose.

“There was a time when the British garden machine industry was by far the biggest and the best in the world, but sadly that has now been lost.

“We sometimes get confused visitors from the USA saying ‘We have just visited the Lawns at Hampton Court, now we are at the Lawnmower Museum, but Southport is not in the south, it’s not a port, it doesn’t have a harbour and the sea can be a distant mirage! Anyway after visiting Southport we are going across that cute little river to France!’” 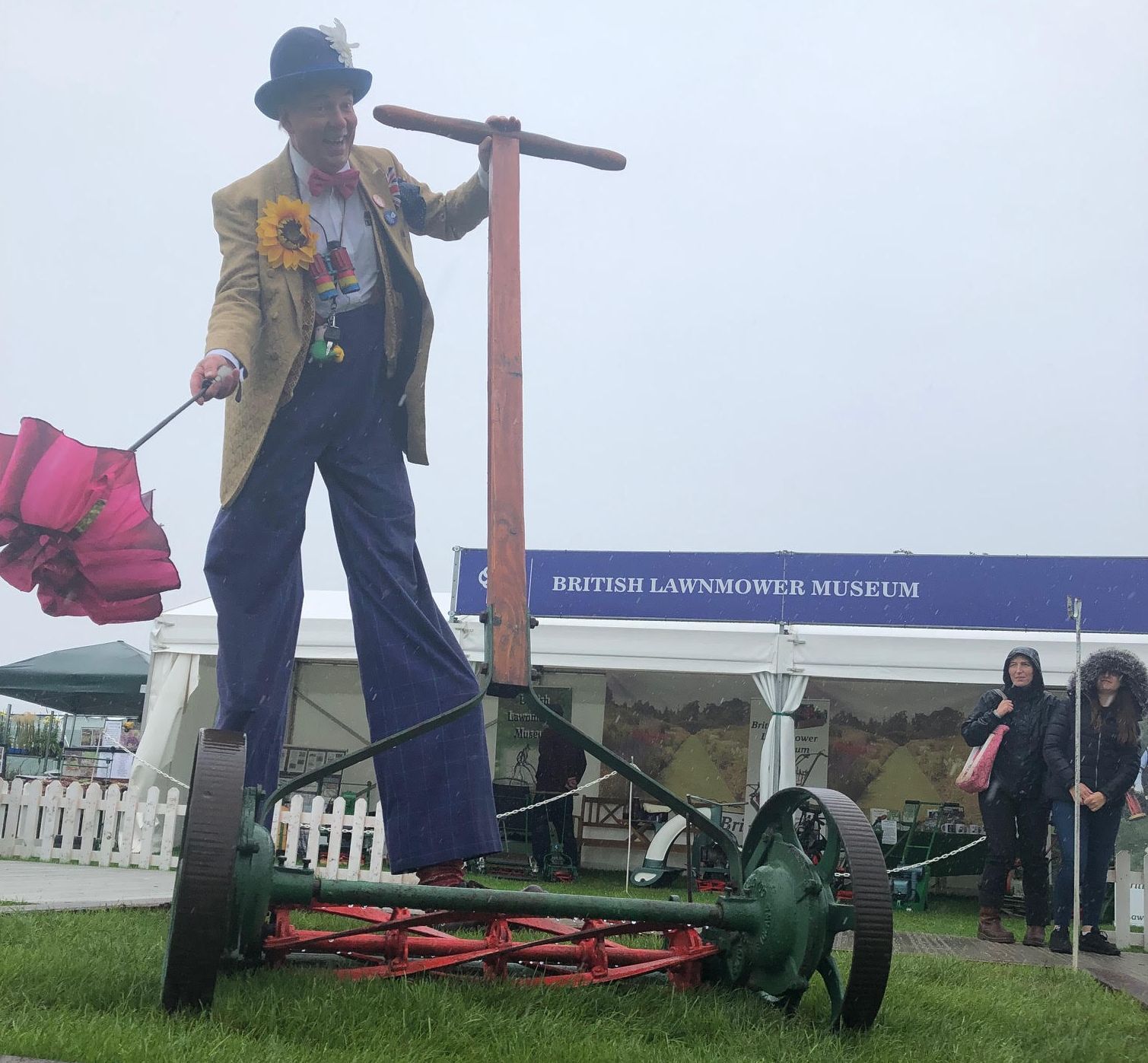 The world’s largest lawnmower, one of the many exhibits at the British Lawnmower Museum in Southport, pictured at Southport Flower Show. Photo by Brian Radam

The lawnmower was invented in 1830 by Edwin Beard Budding. Deemed a madman and lunatic for making such a strange contraption, he had to test his machine at night so as not to be seen. “Almost 200 years later, his invention has never been bettered for that perfect groomed finish and is still the preferred machine for producing the world’s best lawns of palaces, sports grounds, golf, cricket, tennis and bowling greens of course domestic lawns all over the globe.

Although sold by the millions each year, Edwin died penniless never knowing how popular his machine was to become.

Southport’s British Lawnmower Museum got a special makeover this week.

The unique attraction, which is situated on Shakespeare Street, now boasts brand new cutting edge graphics to the ground and first floor facades.

The Museum is participating in the UK’s special Heritage Open Days from 10th to 19th September 2021.

The Museum and artefacts are often featured on TV, film, radio and national press.

The venue was recently featured on BBC Radio 6 with Lauren Laverne chatting about Brian May’s mower from rock band Queen.

The British Lawnmower Museum on Shakespeare Street in Southport. Photo by Brian Radam

Look out for new TV programmes due this Autumn and Christmas, one featuring ‘Lawnmowers of the Rich & Famous’,the other in a new drama series.

British Lawnmower Museum Curator Brian Radam said: “The museum draws tourists from all over the globe to celebrate this very humble but quintessentially very British invention.”

The Museum is open all year every day, except Sundays and bank holidays.

The £3 entrance includes an audio tour.

If you mention Stand Up For Southport, you can get in for half price.

However for a unique experience that’s something completely different, personal guided tours are a cut above – to book contact br@lawnmowerworld.com.