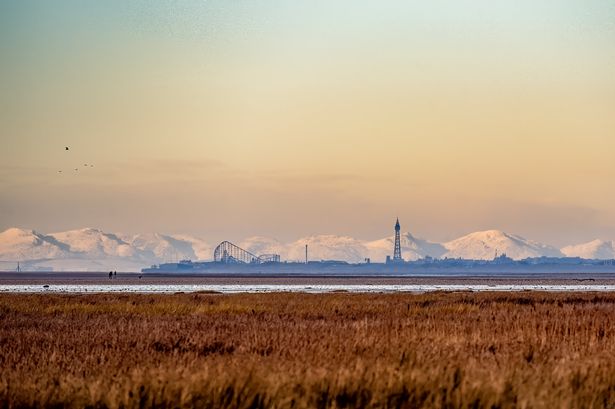 A sensational photo of Blackpool and the Lake District which has gone viral is now helping to raise money for charity.

The photo by Southport photographer Kevin Jackon is now available for sale through his website The Amateur Astrophotographer’s Cookbook.

The image is being sold to raise money for Parenting 2000, a charity based in Southport  which was set up in 1994 by a group of parents.

The charity runs a range of services across Sefton that provide emotional and practical support, and information targeted at vulnerable children, young people and families in our community.

Funds will also go towards the Rosemere Cancer Foundation at the Royal Preston Hospital.

Kevin Jackson from Birkdale, captured his remarkable photo using a Nikon D750, on what was an extremely clear day. The looming mountains in the background show the Lake District while Blackpool Tower and Pleasure Beach can also be seen.

Kevin, who works as a pre-sales solutions architect, told LancsLive: “My wife was heading into work on Sunday and she drove past the coast.

“She told me later that it was a lovely view and the day was clear and that I should walk down to get some pictures. I did and the whole thing really took off from there.

“This was pure chance. I was not expecting the reaction to it online, I am completely overwhelmed by the support and appreciation from everyone.

“Everyone has their own small following in things, I post my astrological pictures on there for example, and I get the old handful of likes, but nothing like this at all, not like this. “

Kevin has been inundated with requests from people asking to purchase the picture, so has decided to donate all proceeds to two local charities.

He said: “There have been lots of people on Twitter messaging me, lots of requests, lots of people asking to buy the picture. This is the reason why we have decided to sell the photo and have the proceeds to go to charity.

“The money will go to a local one in Southport – Parenting 2000, which helps with the emotional support of children and family.

“We are also hoping to raise money for the Rosemere Cancer Foundation at the Royal Preston Hospital, where my wife works as a senior radiographer, so people who buy the print will have their money go there.

“The whole thing has worked out quite well – we got friends who live in the Lake District who sell and make prints and stuff.”