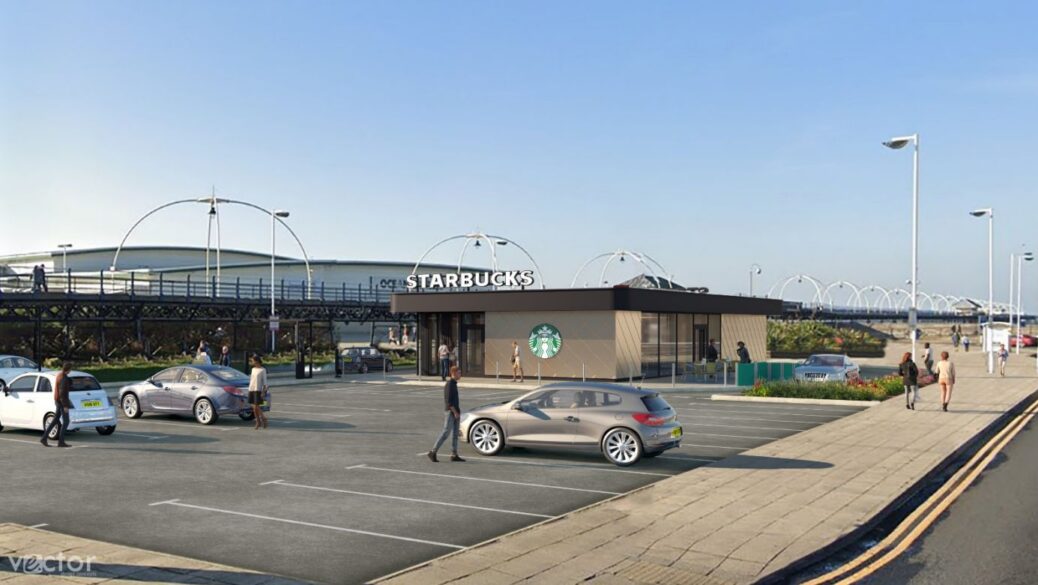 Plans to build the first Starbucks drive-through coffee shop in Southport have taken a step closer.

The firm building the ‘coffee pod’, which would be situated between Southport Pier and the drive-through McDonald’s restaurant at Ocean Plaza, has now submitted an official Highways Construction Management Plan to Sefton Council.

The new Starbucks pod would include an external seating area and would be built on land that is currently used for 79 parking spaces.

The new development would create 20 new jobs and would be the second Starbucks in Southport, with one already on site on Lord Street.

Working hours would be between 7.30am and 5pm, with all workers required to sign in and out.

In the application, they said: “The works entail the construction of a new drive thru coffee pod in the footprint of an existing car park of Marine Parade opposite McDonalds.

“The loading and unloading of plant and materials will take place within the site, once vehicles have turned off Marine Parade.

“The site entrance gates will be set back from the road to allow vehicles to pull up without causing obstructions to the highway.

“An area to be used as a site compound has been agreed. All plant and materials will be stored in this compound area.

“The site Traffic Plan highlights the safe access route from the welfare area to the building area. It also shows that the site is secured from the public with a robust line of fencing and gates which will be kept closed when not in use.

“A secondary line of fencing will be erected around this compound to prevent unauthorised access. A dedicated camera security system will also be employed on the site, to monitor any activity out of working hours.

“Warning will be activated if the system is brought into use and if necessary, security operatives or the police called to the site.

“This area will be cleaned and monitored by the site manager throughout the contract. All vehicles will be checked by a banksman to ensure their cleanliness before they will be permitted to leave the site.

“Warning signs will be provided on Marine Parade advising of the location of the site entrance and site egress. Dust control on site will be assessed at the commencement of each day. We do not anticipate dust becoming a serious issue on this site.”

The new drive-through Starbucks and the Miniature Railway plans represent further investment in Ocean Plaza, which saw the closure of Frankie & Benny’s and Chiquito during the Covid pandemic.

In its application to the council, The Harris Partnership said: that the new Starbucks has the “potential to activate an under-utilised site which benefits from a prominent position”.

Starbucks had been in discussion with Sefton Council’s planning department about the scheme since 2019, and following discussions and advice it subsequently submitted a formal planning application.

In 2017 a planning application was submitted to Sefton Council to build a new Starbucks drive-through coffee shop at the BP Garage site on Scarisbrick New Road, on the outskirts of the town centre, but the scheme was never pursued.

Plans have now been lodged to convert the BP Garage site into a 24-hour Asda convenience store.