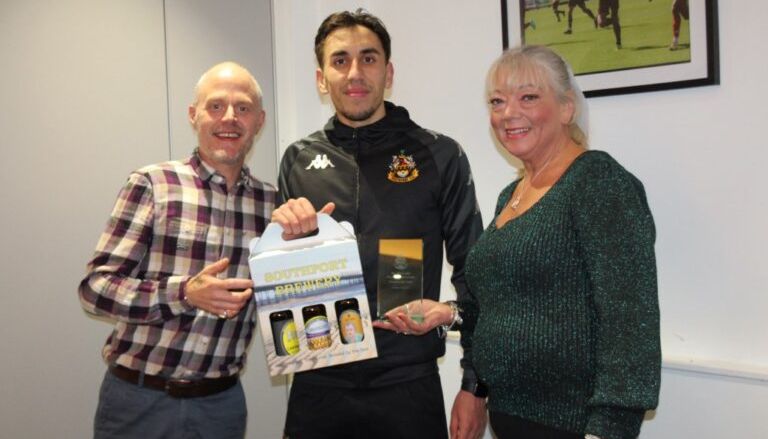 For the second time in a month Southport gained a convincing win against Farsley who must be sick of the sight of playing The Sandgrounders.

A comfortable 4-0 win on Saturday gave the home side the three points.

It was however Farsley who created the first chance of the game after just 70 seconds and if that had gone in it could have made for a difficult afternoon but Tony McMillan made a superb save to keep the ball out,

After that scare Southport created several chances and it could easily have been 3-1 after 8 minutes!

The first goal came through a dreadful goalkeeper error which allowed Jordan Archer to slot the ball home into an empty net in the 9th minute.

Goal number 2 arrived when Jack Doyle, instead of releasing the customary long throw fed Josh Hmami who floated a delightful cross in and Adam Anson scored his second goal in a week heading home from 8 yards out after 32 minutes

The second half saw two more goals added after former ‘Port player (albeit for a very short time) Mulhearn was shown a rather harsh red card for a second bookable offence,

In the 70th minute Niall Watson was left in the clear to finish really well and make it 3-0 and completed a double in the 83rd minute when another goalkeeper error allowed him to charge the the ball down, there was still work to do and he beat his man before releasing a fantastic shot into the net to cap off a fine performance.

The Southport Brewery  Man Of The Match, receiving the Adam Le Roi Trophy and chosen by Match Sponsor The Family Of Adam Le Roi was Josh Hmami.