More new Southport Market traders will be revealed over the next couple of weeks, with the new businesses “excited” about the prospect of moving in.

The new food, drink and events attraction is due to open this Spring as a £1.4million transformation led by Sefton Council continues. The project has been made possible through £900,000 Southport Town Deal funding and £500,000 from the Liverpool City Region Combined Authority.

An announcement yesterday revealed that Southport-based firm 600 Degrees, famous for its traditional wood fired pizzas, will be among the new tenants.

Once complete, the new-look Southport Market will offer a central bar area surrounded by 10 food and drink units serving up mouth-watering food, supported by fresh produce from Blackhursts Butchers and a flexible event and market space.

Cllr Marion Atkinson, the Sefton Council Cabinet Member for Regeneration and Skills, revealed that “everything is on schedule” for the grand opening.

Speaking to Stand Up For Southport following a site visit there last week, she said: “I am just astounded at the size of that space. It’s huge, it’s absolutely huge. I enjoyed having a really good look around there.”

The council received a huge boost last year when the Government announced that it was awarding Southport a £1million Town Deal Acceleration Grant to help progress some early Town Deal proposals.

The Town Deal board decided to commit £900,000 towards the market transformation.

A further £100,000 went towards supporting the Southport BID project to create “a boulevard of light” with 300,000 new decorative lights along both sides of the mile-long Lord Street, with the work carried out by Southport firm Illumidex UK Ltd.

Cllr Atkinson said: “In terms of the market itself, we had worked on a business case prior to the Town Deal money becoming available. It was really good timing that we had that business case ready in situ so we were able to take advantage of that million pounds in Town Deal Acceleration Grant funding last year.

“We also had half a million pounds from the Liverpool City Region Combined Authority Town Centre Fund so when it came in, it was great in such a short space of time, because any suitable project had to be what they call ‘shovel ready’. And it takes a lot of time to get into that space. So, fortunately, we were ready to go.

“We are really enjoying working with the traders, they are so excited and so ambitious about the market.

“Everything is on schedule, fingers crossed, and – restrictions permitting – we’re going to be open when it’s safe to do so.

“We’ve installed a Changing Places Unit. Accessibility to venues is a hugely important factor to us.

“We’ve carried out extensive enabling works, making sure that Blackhurst Butchers could continue to trade through the building works as well so we’ve kept that business going.

“The contractor we have, Medlock, they’re using local labour wherever possible, and in the next couple of weeks we’re going to be announcing a number of the new traders once we firm up the heads of terms with those businesses.

“But I will say, a large number of those traders are local businesses, local people who have set up. 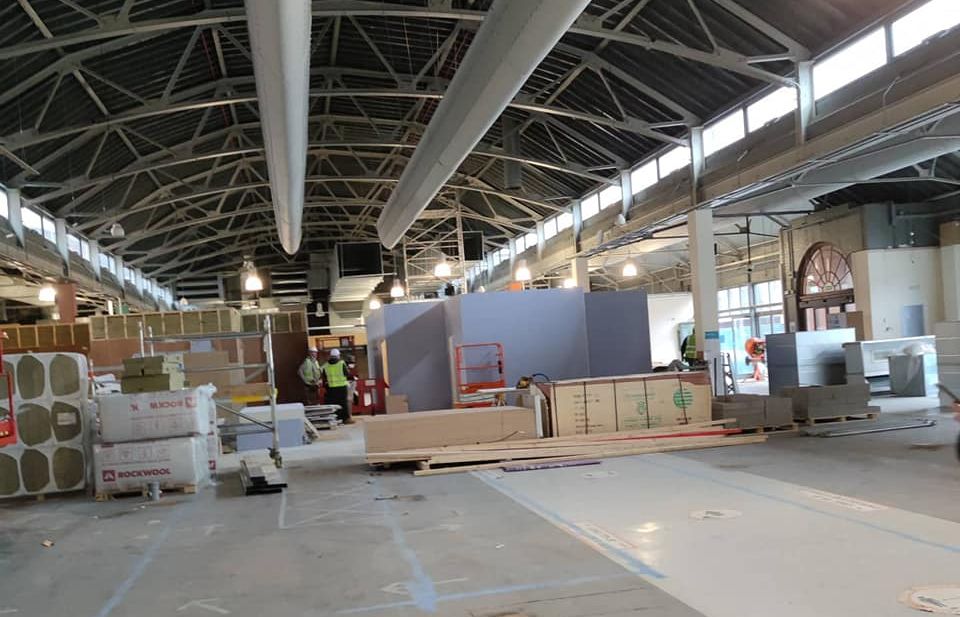 Work is underway on transforming Southport Market into a new food, drink and events hub

“They’ve got a customer base, and the operating model that we’ve designed has provided that environment for those new traders who are starting to grow their business and to grow their customers.

“The model that we’re looking at is a turnover rent model, and all of those new businesses that we’ve spoken to are really keen to get involved in that type.

“And I think that what that does is lowers the risks significantly for those businesses. So it’s their opportunity to shine as well as managing that risk.

“The space at the back, the new events space, is going to allow us to hold flexible market functions and events.

“All I can ask is that the community, and everybody, comes and supports it.”

The new-look market and the new lighting along Lord Street are both designed to help attract visitors back into Southport town centre once lockdown restrictions ease.

Cllr Atkinson said: “I haven’t had a chance to see them but I have heard loads of really positive comments saying that they look amazing, they look fantastic. They transform that space so it’s really good.”